It is so incredibly smoky this morning, with the Crater Lake fires billowing smoke into the skies and the northwest winds bringing it our way.  The Klamath Basin is exactly that, a basin, and as such it tends to capture everything, including smoke in late summer and fog in winter.  Have to admit I am tired of the smoke.

This photo was taken by Brian Gailey, who does some amazing work, especially of the night skies

The culprit at the moment are fires from Crater Lake, started by that amazing lightning storm I spoke about in the last post.  Before that it was the Modoc fire, started from another lightning storm, and as almost always in summer, lightning started fires from the Trinity Alps to the southwest of us in California.  Oh yes, can’t forget the Chetco Fire, burning in the Kalmiopsis Wilderness in the coast range west of us, and a few fires near Warm Springs in Central Oregon, and a few more in Cascades on the Umpqua National Forest.  Yes, it is ongoing, and it is tiresome. 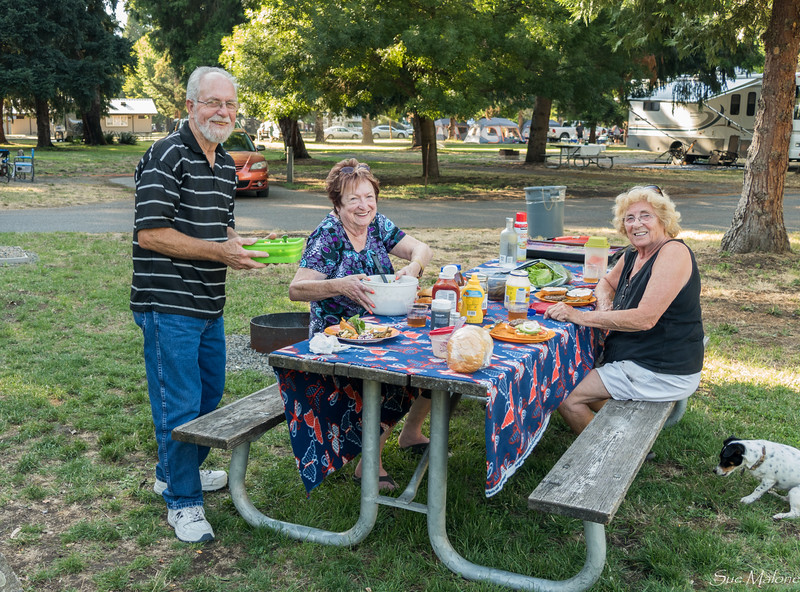 Needless to say, when our friends Maryruth and Gerald asked to visit us in late July we were delighted.  They have a new to them motorhome, and wanted to take a little trip to a bit cooler climate than the hot Sierra Nevada Foothills and Oroville where they live.  I did warn them about how hot is was going to be in our area as well, but they were game, ensuring me that their air conditioning in the rig was up to the task.  What I had no control over were the fires, and the most amazing thing of all was that we had gorgeous clear skies during their entire visit. The Crater Lake fires were still in their infancy, and the winds took most of the smoke away from the Rogue Valley.  Lucky us!

Thanks to Jimmy and Nickie’s experience the week prior, we knew to warn Maryruth and Gerald that in spite of the posted 1pm check in at the Valley of the Rogue State Park, they should double check.  Sure enough check in was delayed until 4pm.  They took their time driving north from Oroville, planning their arrival late enough that they wouldn’t have to hang out in the parking lot with the air going for any length of time. 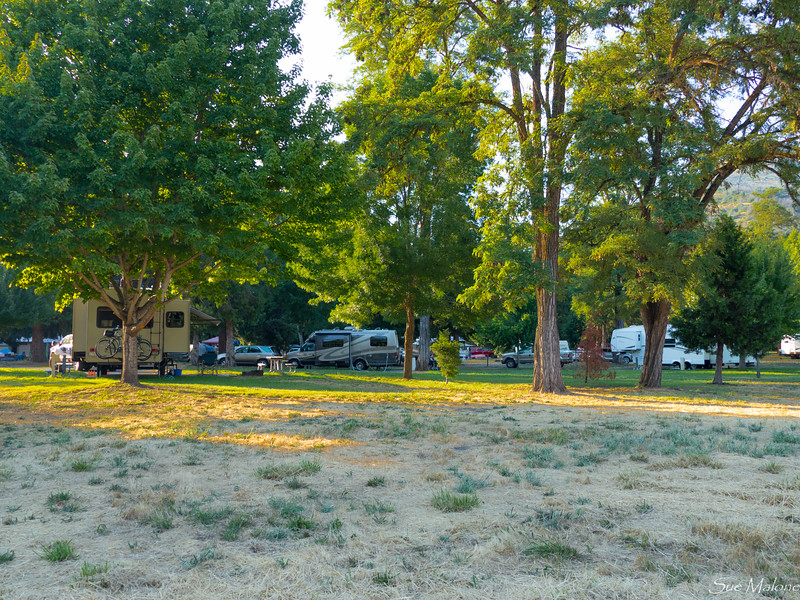 For this visit, Mo and I had decided to take the MoHo to the park as well, unhooking the rig from her semi permanent home at the house build, and driving the 12 miles south to the park.  Even with such a short distance, it was fun having a different view.  The park was completely booked due to a huge country music jamboree scheduled for the coming weekend, so we were lucky that Maryruth had arranged reservations for both of us.  Our sites were close, just across the road from each other, with only a short distance needed to move chairs and food back and forth between the two sites.

In spite of the heat and fire weather watches, at the time we were still allowed to have a campfire in the designated firepit at the park.  With an easy supper of burgers and salads, Mo started the fire and we sat around enjoying each other’s company, toasting marshmallows, and catching up on our family stories.  Maryruth and I go back 54 years now, and have lots of stories to share.

Gerald and I took Mattie for a walk along the park pathway, a beautiful greenbelt trail that will hopefully someday fulfill its promise of a 50 mile bike and hiking route between Medford and Grants Pass, following along the beautiful Rogue River and meandering through the hills.   It is a great vision.  The trail is so lovely, I told Mo it was worth the short drive with our bikes to get there for some nice easy biking.  There aren’t a lot of easy, traffic free and non hilly bike trails in Grants Pass proper, so we haven’t been out on the bikes much yet.

We had exciting plans for the next morning.  Mo and I left early to pick up our guests at the park in the car for a day trip to Crater Lake.  Skies were blue, the morning was lovely and not yet unbearably hot even in the valley.  Before we traveled south to connect to the Crater Lake Highway, however, we took a short jaunt north to show them the new house.  We were early enough to miss the contractors, at least most of them, so we were able to wander around the house sharing all the recent developments without getting in anyone’s way. 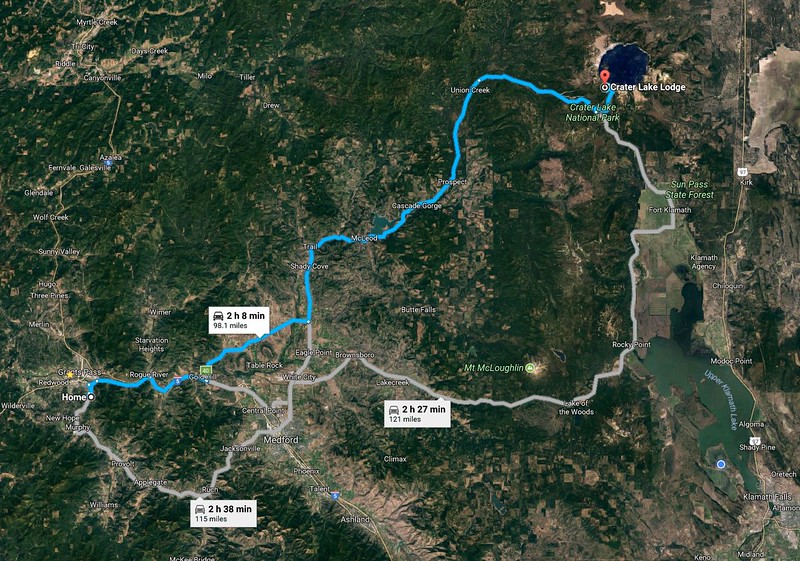 The route to Crater Lake from Grants Pass isn’t terribly long.  A couple of hours of beautiful valleys and the climb to the 7,000 foot elevation of the park is gorgeous, with beautiful timber along Highway 62. 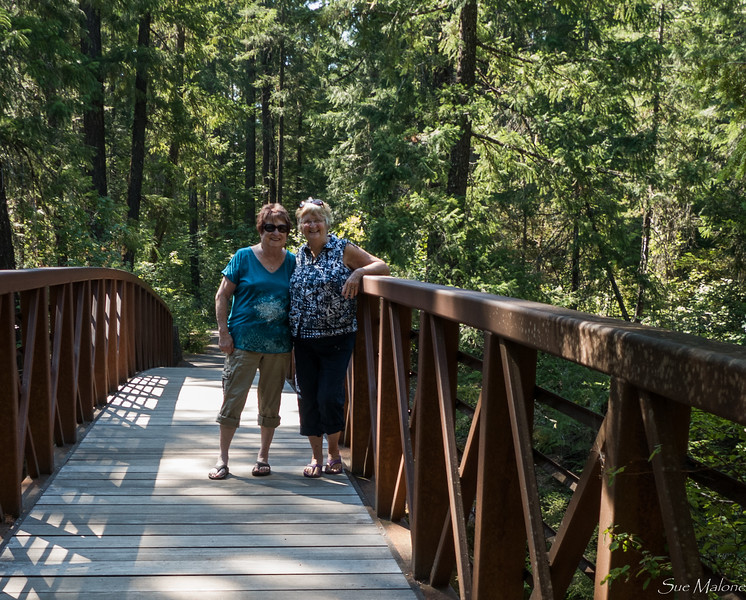 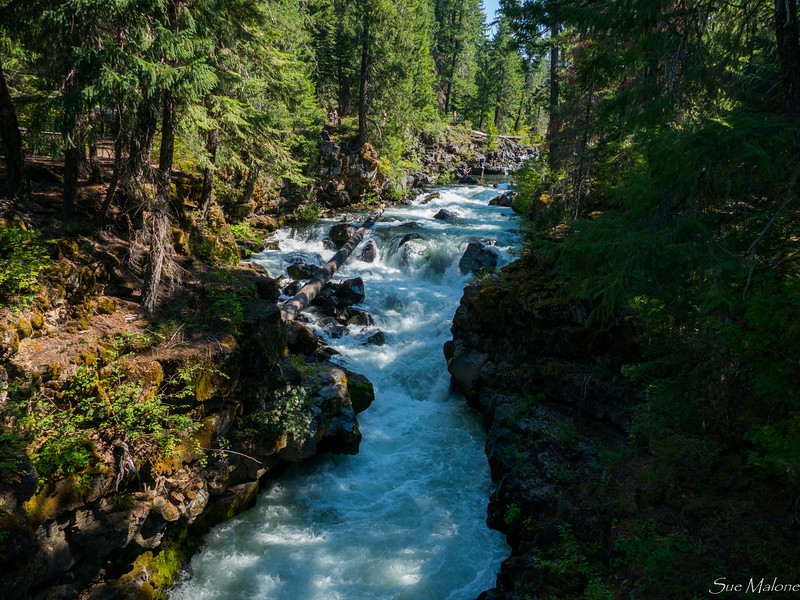 We stopped near Union Creek to view the magnificent Rogue River Natural Bridge area.  Hiking wasn’t on the agenda for this day, but this trail along the river is gorgeous.  Mo and I have camped nearby and hiked in this area several times in the past.

Continuing up the mountain, we were shocked as we approached the entrance to the park.  It was the middle of the week, around 10 in the morning, and there were long lines from each direction at the southern entrance.  Such a surprise.  I have never experienced any line ever coming into Crater Lake National Park. 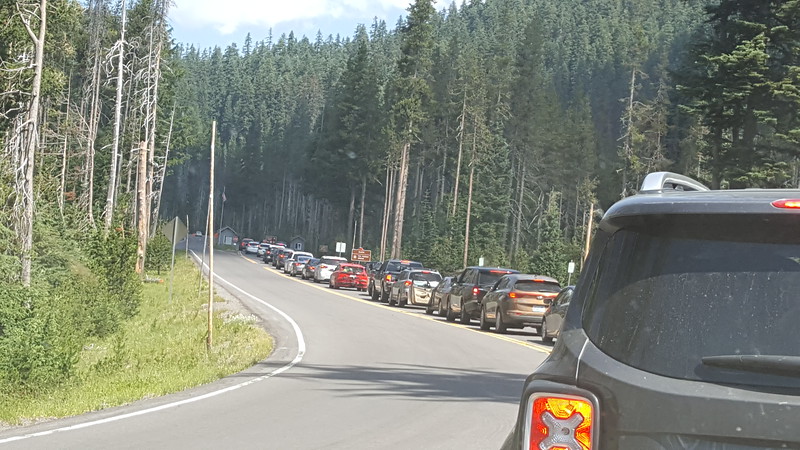 We were a bit apprehensive as to what it would be like being in the park, but it actually wasn’t nearly as bad as the lines portended.  Once past the entry station, and on the main park roads, traffic was decent, I would even say light.  The overlook parking areas were a bit full, but not so much that we weren’t able to park for the views. 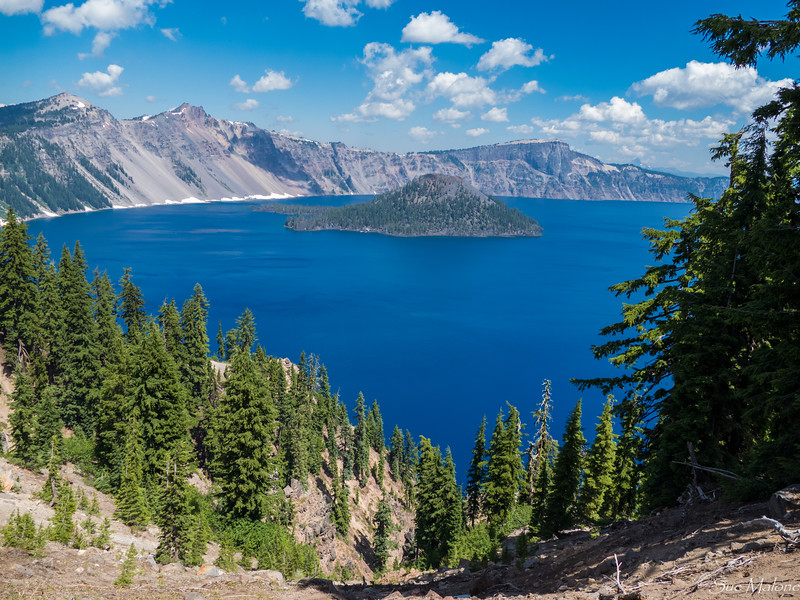 Even the Rim Parking Lot was accessible, and the four of us got out and walked around some, enjoying the views and taking photos.  Maryruth is recuperating from pneumonia, and  I am so grateful she didn’t have to cancel the trip, as we thought she might a few days prior.  That high elevation is killer if you aren’t used to it. 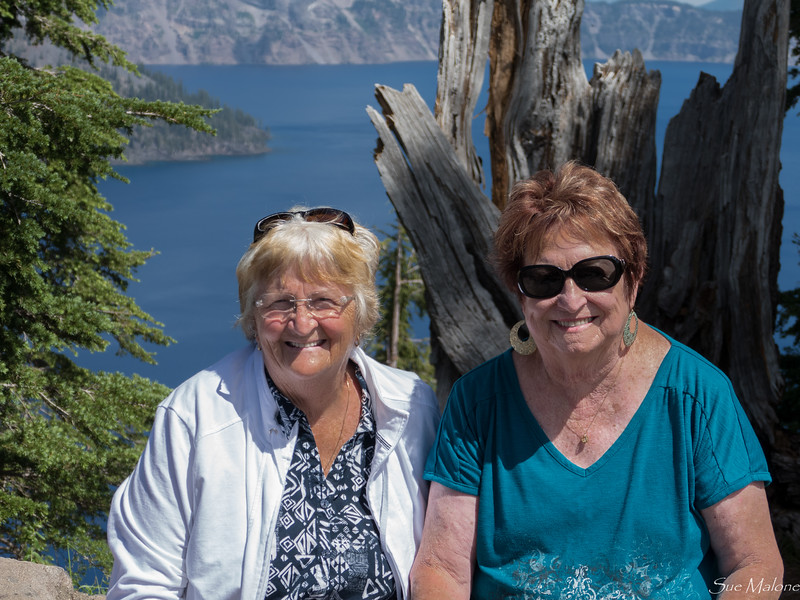 We took our time meandering around the rim, noticing plumes of smoke rising toward the west, a fire that later became the Blanket Fire, and another one, the Spruce Fire, both creating all our smoke that I mentioned earlier.  In spite of this, the air at the rim was crystal clear, the skies incredibly blue, the water as gorgeous as ever.  The color is legendary, photos aren’t enhanced, and actually need to be toned down a bit to look real.  We especially enjoyed the high altitude cooler temperatures, at least 20 degrees less than what they were that day in the Rogue Valley.

There were a couple of delays for road construction, but that kept the line of cars driving the west rim road at a reasonable speed, and we still managed to see all we wanted to see.  The Watchman trail was closed, and I was glad that we hadn’t made a special effort to get to Crater Lake with Nickie and Jimmy last week.  The Watchman was a trail I had planned to do!

Circling back around the east side of the lake, we took photos of the Phantom Ship from the iconic spot, and only a week later the Phantom was almost completely invisible due to smoke.  What a lucky break for us to be able to enjoy this gorgeous place before the smoke took over.  My heart breaks for people traveling from all over the world to see this beautiful place and finding thick smoke and no views.  The park is still open, but I just can’t imagine what a disappointment it would be for distant travelers.

Traveling back west down the mountain, we stopped at the historic Becky’s Cafe.  Any time you mention going to Crater Lake, locals will say, “Are you stopping at Becky’s?”  The place is most famous for its berry pies, but we had a delicious late lunch as well, with crowding not unbearable due to the mid afternoon timing. 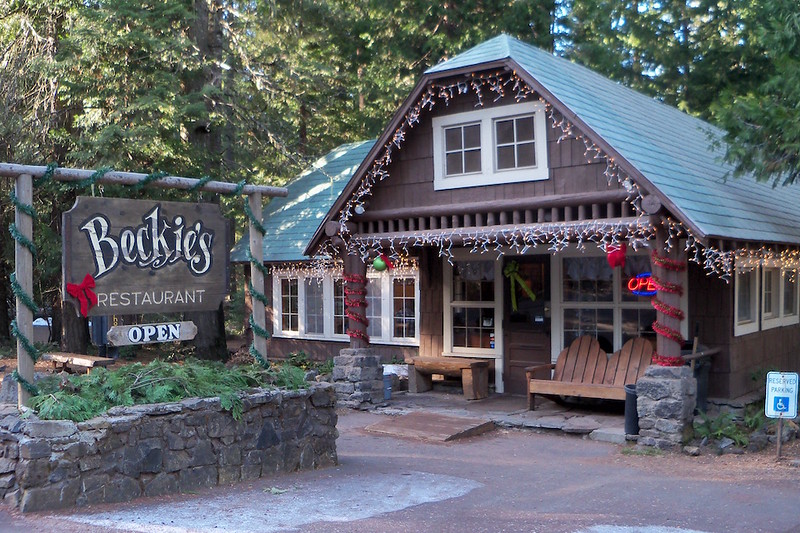 Back to the Valley of the Rogue state park in late afternoon, with triple digit weather, we retreated to our motorhomes for a refreshing air cooled nap before emerging once again for campfires and marshmallows.  What a gorgeous day it was to share with good friends.

The next morning, per Maryruth’s request, Mo made a campfire breakfast.  In the past, when we have camped with Maryruth and Gerald, these big and bacon fragrant outdoor breakfasts have been a highlight.  Morning sunlight, good coffee, great bacon, good friends, who could ask for more! 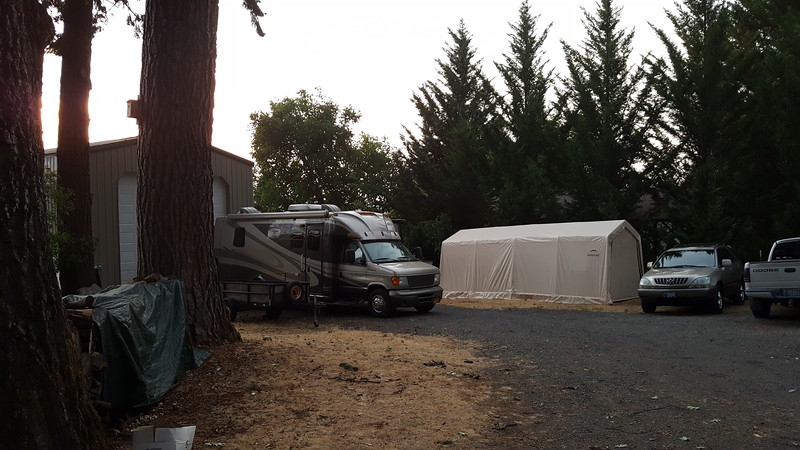 At checkout time, Maryruth and Gerald continued their journey northward in Oregon to visit more family and Mo and I returned the MoHo to her spot in front of the new house.  Time to settle in, catch our breath, and enjoy some down time after a whirlwind July.