Current Location: Old Fort Road in Klamath Falls and the sun is shining!!!

I look at our calendar, I look at our life, I look at what is coming up, and I say to Mo, “Somehow I have to try to write about this!”  But I am not really sure how to go about it.  I finally decided that all the things I want to write about aren’t really for public consumption.  Stuff no one but our close friends care about anyway.  The Cottage, The Build, and of course, THE EPA PROJECT!

(March 25 Even though I decided to post this on the transitions blog, I thought that maybe it could still go up on the “main blog”, but dated far enough back that it won’t make it to all the blog rolls and such.  And of course, I don’t need to post it to facebook or plus it on google.  I am just putting it here so everything is in one place and I can find it again as we move forward.)

The Old Fort Road apartments  on a late fall day 2016

I am not even sure if I have alluded to this part of our life anywhere previously.  It is an ongoing issue, something that Mo has been dealing with since the year 2000 or maybe it was 2002.  Mo’s apartment building was once part of the historic Marine Barracks from 1944 to 1946, a place where servicemen could rehabilitate from malaria. The property was later sold to Oregon Institute of Technology (OIT), then later passed on through different developers until it became a rather nice development called North Ridge Estates.  What no one knew at the time, (and wasn’t known when Mo bought the apartments in the late 90’s), was that the developers simply buried the old asbestos materials that they found on the site.  As years passed, frost heave brought some of the asbestos to the surface, and that is when everything changed. 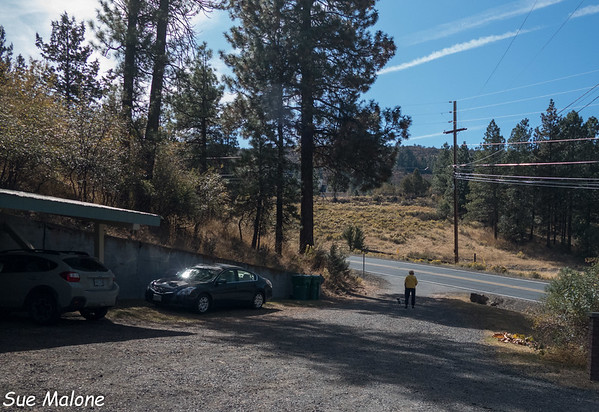 All the trees are gone now, the ones on our property on this side of the road and the ones across the street

Here is a bit of history:  (Don’t get discouraged if the site takes a long time to load, you know how things are going with the EPA at the moment)

“The North Ridge Estates Superfund Site is a residential subdivision located approximately three miles north of Klamath Falls, Oregon. The site is contaminated with asbestos as a result of the improper demolition of approximately eighty 1940s-era military barracks buildings. North Ridge Estates was added to the National Priorities List in 2011 after annual efforts to remove contamination were not effective for long-term protection of human health. Asbestos-containing materials and soil will be removed from the old military barracks site during three seasons of cleanup”.

To be fair, the actual contamination here on Mo’s property is minimal, but the EPA is being very aggressive about the cleanup.  A few years ago, there was a smaller effort at soil cleanup where the soil was removed on the hill just west of the apartment building, but the trees were left standing.

Since that time, the entire site was declared an EPA Superfund Site, and listed for cleanup.  We are in the midst of that process right now.  Prior to the major excavation work, the EPA determined that all our huge pines had to come down.  They couldn’t be saved because of the steepness of the slope and the possibility that the asbestos has incorporated into the roots and lower bark of the trees.  They left us three legacy trees, but the rest are gone.  This is not all bad.  The old pines made a huge mess, and were a danger to the apartment building in high winds.  They will be replaced…with 6 foot trees. 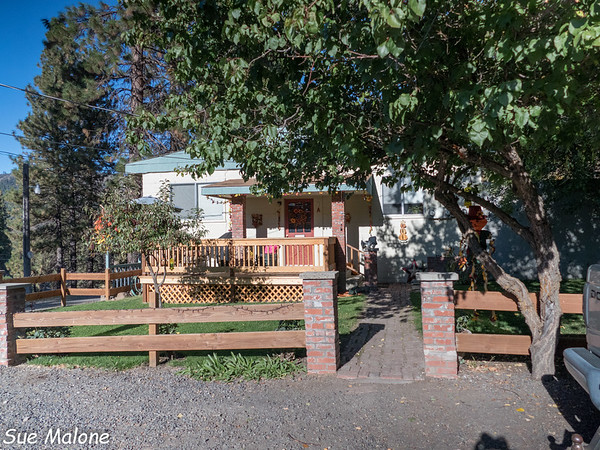 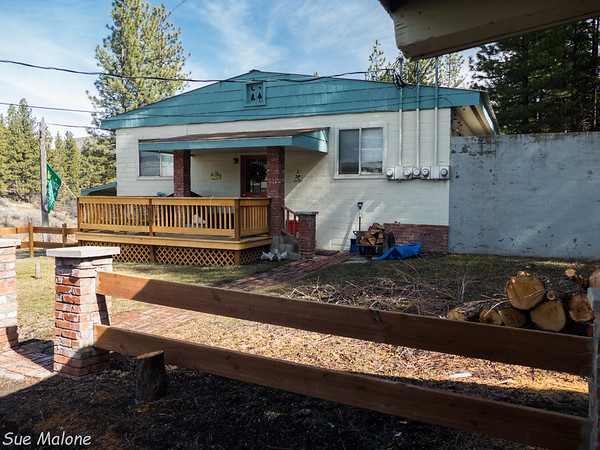 They took out the old apple, apricot, elm, and cherry trees that were in the front yard of Apartment A, and the place now looks incredibly naked.  We have worked with the landscape architect that is designing the replacement landscaping, and are convinced that things will look really nice once the project is completed, and we were given lots of choice in how we want plants replaced.

The soil will be removed down to 2 feet, and if asbestos is discovered anywhere, it will be excavated to 4 feet and a protective barrier placed. During the the three month process, all the apartment dwellers will be relocated to local furnished rentals, for now that has been determined to be nice townhouses and condos at the Running Y Resort.  The dwellings are fully furnished, down to coffee pots and bedding, and we only have to take what we can’t do without for three months.  Think about that for a minute.  What would you take if you knew you couldn’t go back to your house for three months.  It is a bit like when we went on our three month MoHo excursion to Florida.

We will need the computers of course, important papers and documents, I want my sewing machine and some fabric, and enough clothes for summer and fall weather.  What about our food?  We will have to empty the fridge and the cupboards and hopefully whatever cookware is at the condo will suffice.

For daughter Melody and grandson Xavier, this is especially confusing, since in order to get the free relocation, renters are required to maintain their lease.  Xavier graduates high school in mid June, and the family decision is to move north to Eugene where we are hoping he will be accepted as a student at the University of Oregon.  Still not sure how all that is going to work. Melody won’t be ready to go in June, but hopefully can get relocated before September.

In the mean time, Mo and I will be right in the middle of the Grants Pass house build.  The cottage will be long gone, and our domicile in Grants Pass for the alternate weeks that we plan to be there will be the MoHo, so that we can keep an eye on the building process and be close by when needed for questions and decisions. (I think I am most excited about choosing our granite slab, whenever that happens.)

We are really looking forward to the alternate weeks at the Running Y.  There are beautiful bike trails and a nice private boat launch area on the lake.  We are looking forward to getting the kayaks out a lot more this summer, and hope to actually kayak to Bare Island, something we always said we wanted to do and never managed.  In fact, last summer, Melody and Robert actually paddled 21 miles round trip from Rocky Point to Bare Island!  It won’t be nearly as far from the Running Y, Melody.  Also, there is a beautiful piece of untouched land at the resort, a peninsula that juts out into the lake, called the Skillet Handle, famous as an excellent site for birding.

We are definitely seeing the silver lining of the 3 month vacation at the Running Y and looking forward to some down time, play time while we are there.

Back to the title of this post, however.  This is the week.  Today Mo and I are packing for the next 10 days in Grants Pass.  This is the final week for the little cottage, our home away from home for the last 4 1/2 years.  Tomorrow we will move the MoHo out of her big shed for the rest of the summer, and start moving the few things that are in the cottage into the shed for the duration of the build. 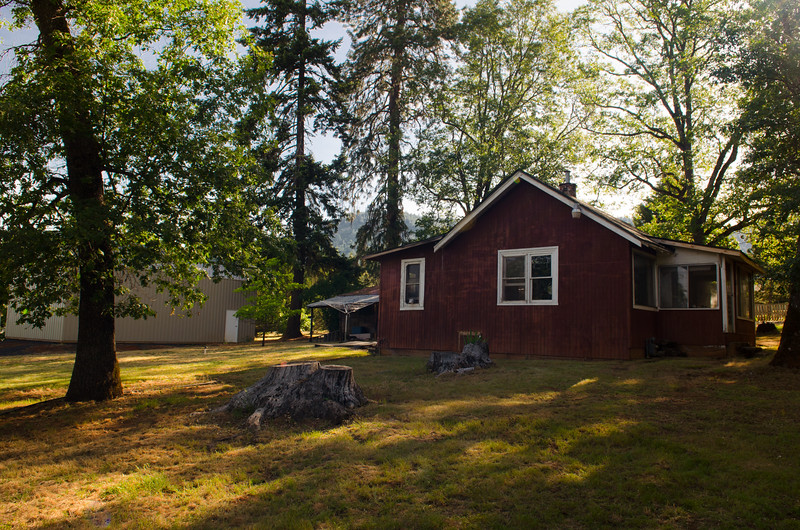 The utilities will go down toward the end of this coming week.  Daughter Deborah is coming over for two days to help us with this project, especially with heavier things like the fridge.  Our big job tomorrow is to think about how we want to use the space in the RV shed.  We are hoping to set up the kitchen table, chairs, and our two rockers toward the front of the shed.  We will pull out the kayaks and the bikes, the mowers and store them where we now store the baby car in the temporary shelter.  Maybe the kayaks will end up on top of the baby car permanently as we travel back and forth between the condo and the cottage.  Oops….guess we are going to have to come up with a new name.  Can we still call it The Cottage if the cottage is gone? 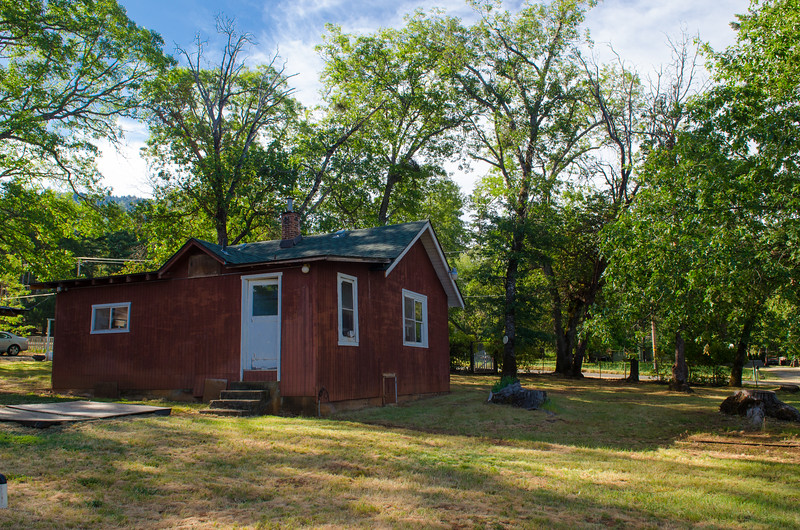 The new house will be a much larger footprint where the cottage is now.  I can only try to imagine how it will look and feel when it is done.

Tomorrow we meet again with the builder to view the final engineering drawings.  Still little things to worry about, of course.  The Development Permit holds up the Green Tag on the new Power Pole, and unless all that gets handled in the next few days, when the power goes off, it won’t go back on immediately.  If that is the case, we will be boondocking without power or water until the electricity for the build is restored.  We might just bail next weekend and head for hookups at the Valley of the Rogue State Park, just a few miles south.

I guess you can see why this was hard to write about.  It feels just about as discombobulated as I feel right now, waiting for all this to happen.  We have known this week was coming, we have been preparing for it, and I hope we are ready for the next big step forward.

OK  I wrote it.  Time to go find some of the photos I have been taking as all this was happening. 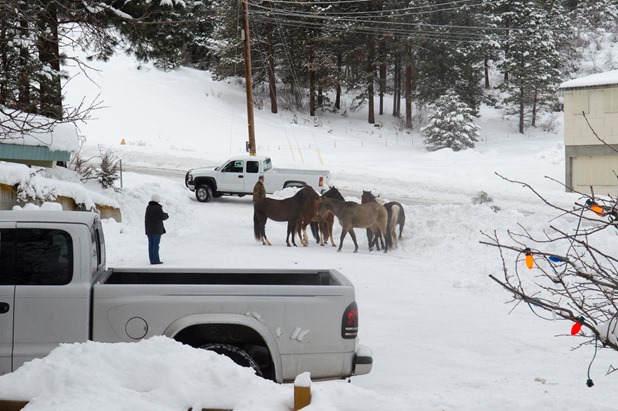 Horses from down the road escaped and decided our yard might be nice.

We woke up to a day with no new snow, nice for a change.  Mo plowed the drive six times in the last 7 days.  Melody and Axel have cars that aren’t exactly good on the steep and often slippery hill just outside the driveway on the short three mile drive to town.  Once up and down the hill, all is good, but for simplicity I have Melody use our pickup to drive Axel to work.  This morning, however, the road was blocked by 7 furry beings, all wandering around the driveway looking for something good to eat. 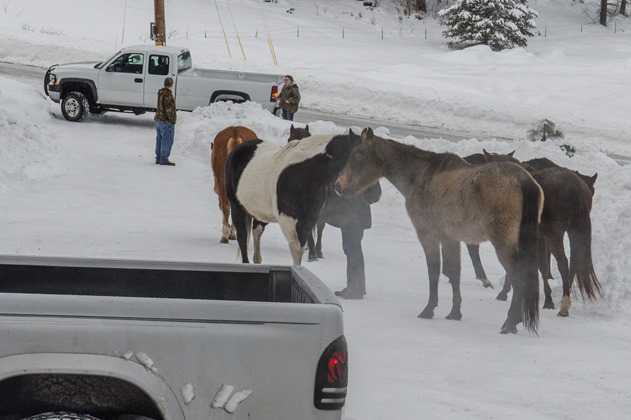 Mattie thought the big critters in the yard looked really exciting.  See that little ridge on her back.  It is important to protect us from any possible evil, and she barked to be sure those horses knew they shouldn’t come in the house. 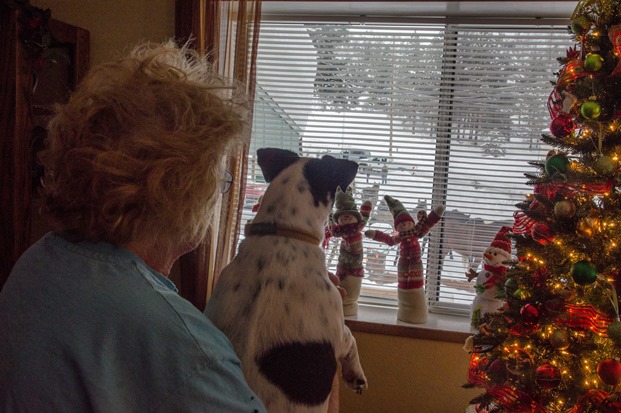 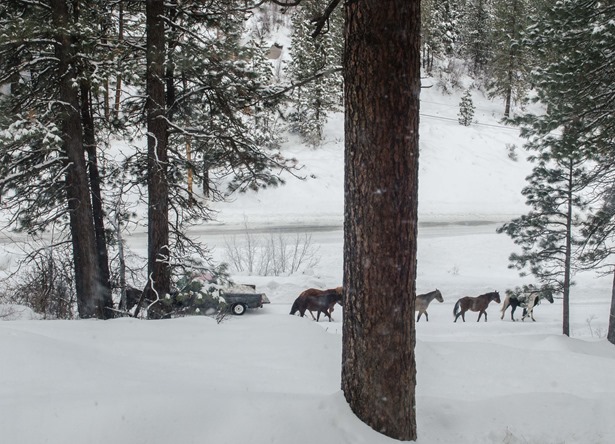 The snow has been here since Thanksgiving, and in the last week or so it just keeps getting deeper.  Icicles provide entertainment as well, like corn on a hot summer day, you can almost hear them growing. 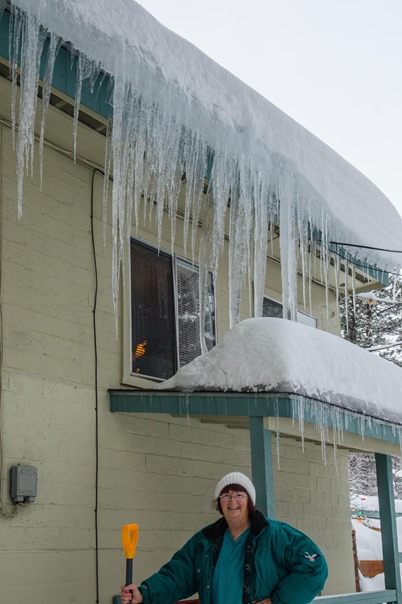 Many days begin with Mo plowing and me shoveling before we come back inside and settle in for coffee and breakfast. 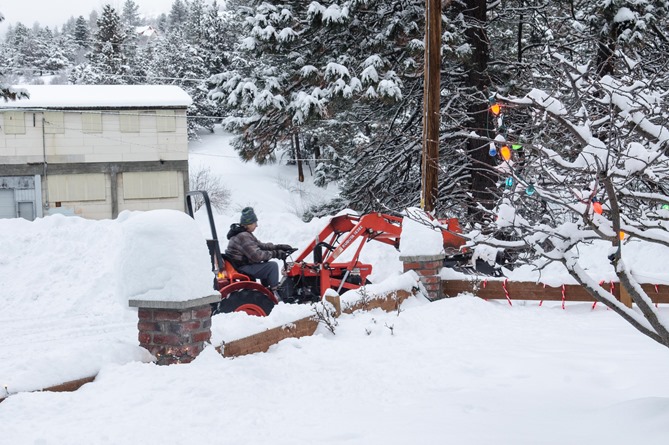 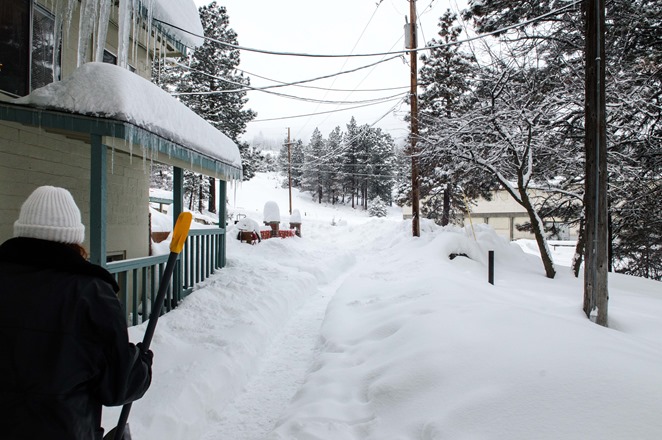 For the first time in a very long time, our calendar is almost empty, with nothing really big showing up until we leave for Southern California mid-month.

I am cleaning up the card making clutter upstairs, and today will get back to my quilting project.  New Year’s Eve will be spent right here at home.  Mo and I have even returned to cards and dominoes in the late afternoons before supper.  After living life at an incredible pace for the past several months, even being a little bit bored is wonderful, and not the least bit boring!