Sometimes on our southern sojourns there isn’t enough time.  On this trip, however, we made sure to get all the way south to Tucson.  We missed our friends and neighbors, Wes and Gayle, who used to live in Rocky Point at least part of the year, and are now located full time in their beautiful desert home in Sauharita, south of Tucson. We have visited them a few times, but it has been a couple of years and we looked forward to sharing some hikes and good food with them. 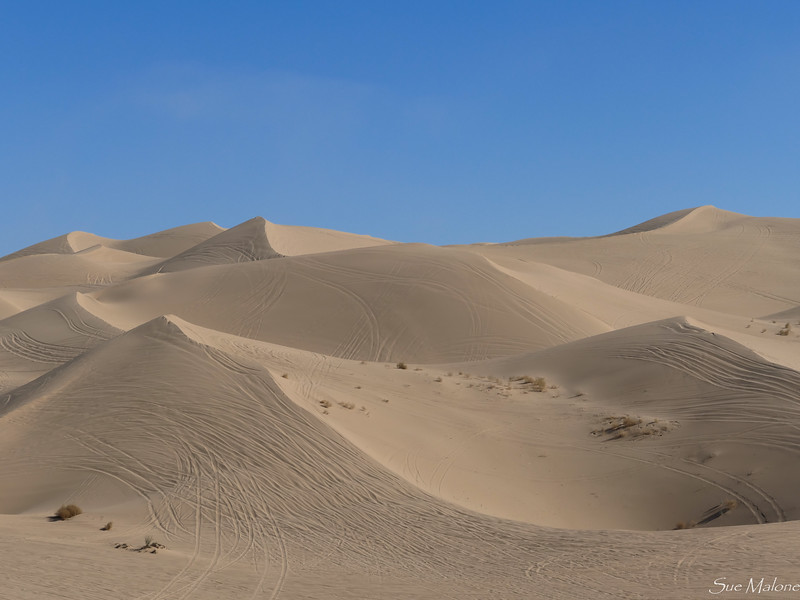 But first, we had to pick a travel route.  That was easy.  One of our favorite boondock sites in the southern desert is the wide open BLM area near Ogilby Road, just west of Yuma.  Lots of fellow bloggers have landed in these open spaces at one time or another, but I think the first time I heard about Ogilby Road was from Nina, at Wheelin’ It, who wrote some very lovely poetic lines about the place and took intriguing photos that sucked me in. 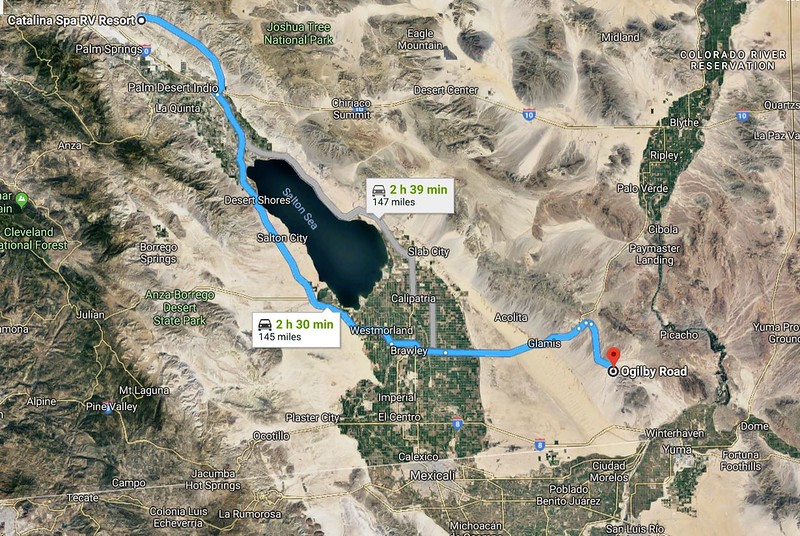 Our first time here in 2014, we came in from the south, but after George and Patsy talked about a back route between El Centro and Ogilby Road, we decided to give it a try. With our 26 foot rig the road was a lovely ride, driving past the Imperial Sand Dunes.  The dunes were quiet on this Tuesday, but the tracks on the sand showed just how busy they must be much of the time with 4 Wheeler’s running about.

Google Maps tried to insist that we take a short cut to Ogilby Road, and we said, no way, it was a bumpy dirt road and we could see that the real Ogilby Road wasn’t too far east from where we were.  I told the google girl to stop talking and we found our own way in from the north.

We found a great wide open spot, not far from the hills toward the northern end of the main boondocking area and settled in quickly.  We set the chairs out in the cool shade and read, took the dog for some walks, and simply enjoyed the incredible silence of the desert as sunset approached. 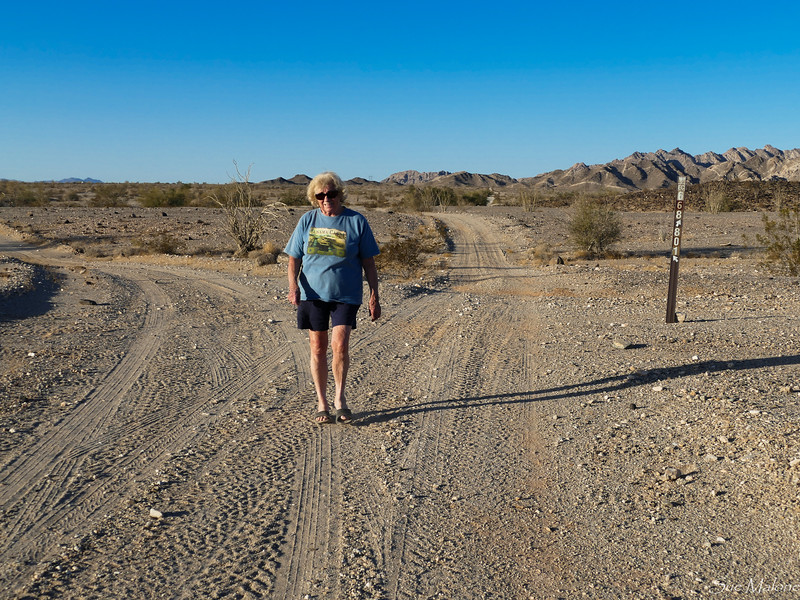 I could stay out here for a lot longer than a single night, but it really was just a pass-through for us this time, and a pleasant one.  Only problem for me is that when we are boondocked in the desert like this, I have to get up repeatedly during the night to check out the stars, the darkness, and the silence.  Incredible.

The next morning we took our time with a good breakfast, a nice walk, and an easy pack up, since we hadn’t unhooked the Tracker, and didn’t even need to drop our jacks on the level desert floor.  We simply pulled in the slide and drove off. 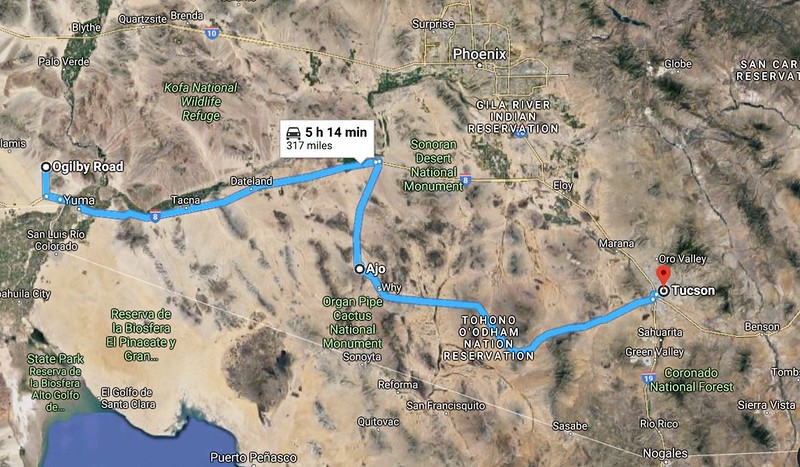 The eastern route toward Tucson is fairly straightforward along Interstate 8 until it intercepts I-10, but that also seemed a bit boring.  Instead, at Gila Bend, we turned south toward Ajo, a place we have heard about often but we haven’t been there in the MoHo.  Many years ago, Mo traveled to the Copper Canyon train, and their tour came back through the US near Organ Pipe Monument, and Ajo.

We were heading for Organ Pipe, but were so enchanted with the little town of Ajo that we spent all our free time there and had to skip the side trip to see the monument.  Next time, I hope.  I still love seeing photos of this place. 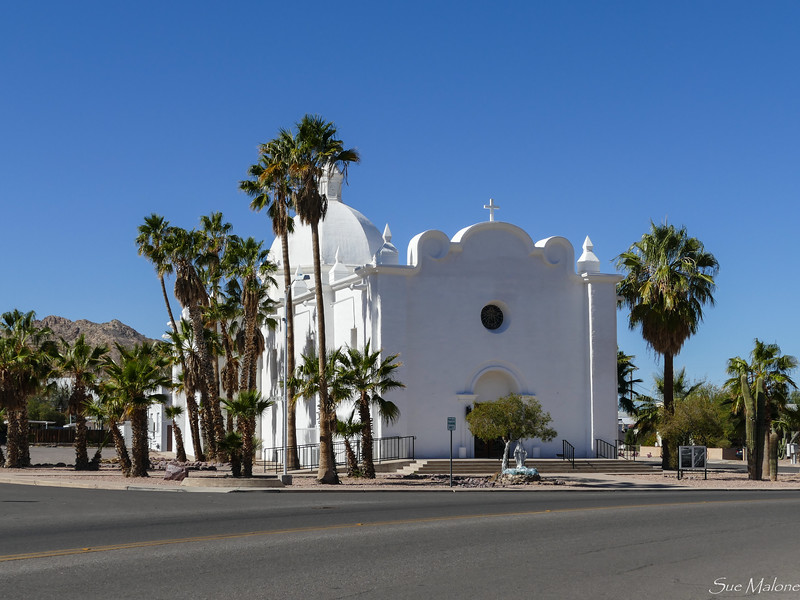 We have friends who have a house in Ajo, but they are currently in Rocky Point.  Judy once had a house in Ajo, and we always wondered why in the world anyone would live there.  After visiting, we now understand.  It is a quirky, artsy place, with cute little funky stucco houses that sell for $69,000 or so.  There are some galleries, a few stores, a great museum, and some gorgeous churches and buildings. 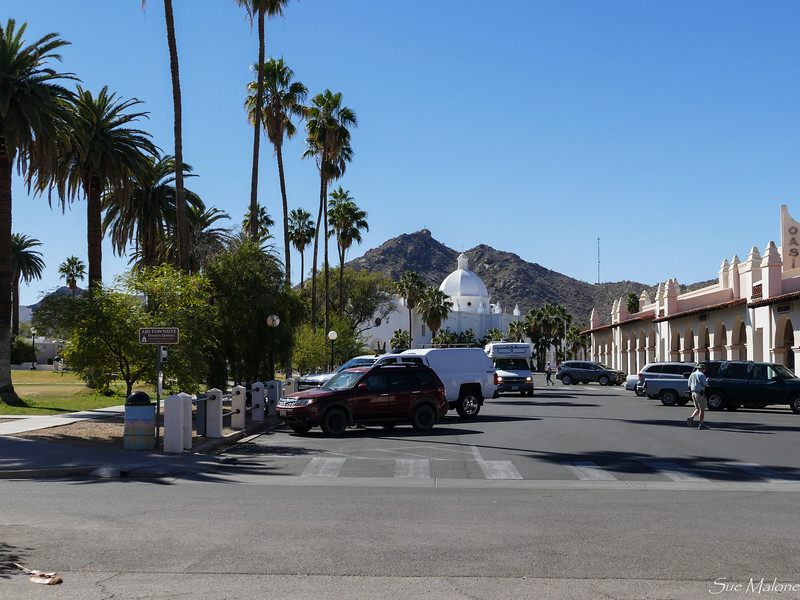 We loved the artist alley with murals lining both sides of the street. We both said having a little house in Ajo would be a fun way to spend winter time in the desert.  But no, we have the MoHo, and we don’t need another little house anywhere! 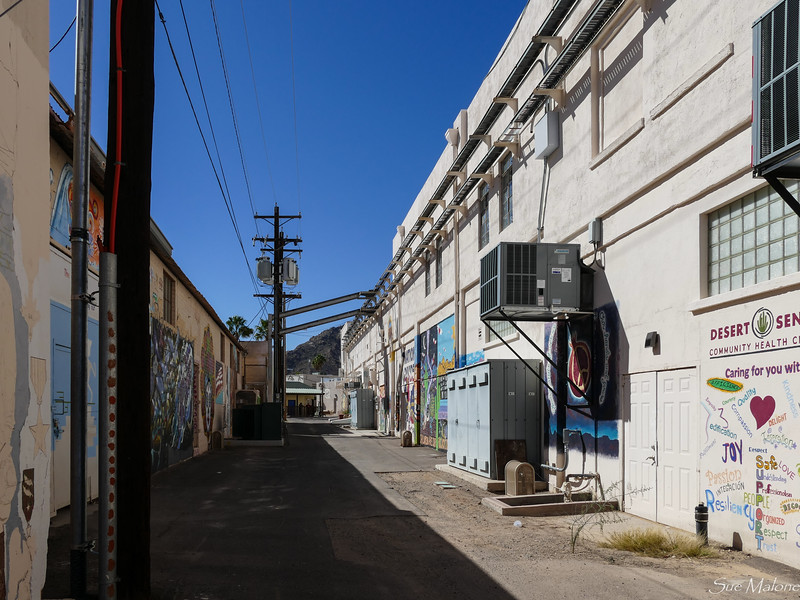 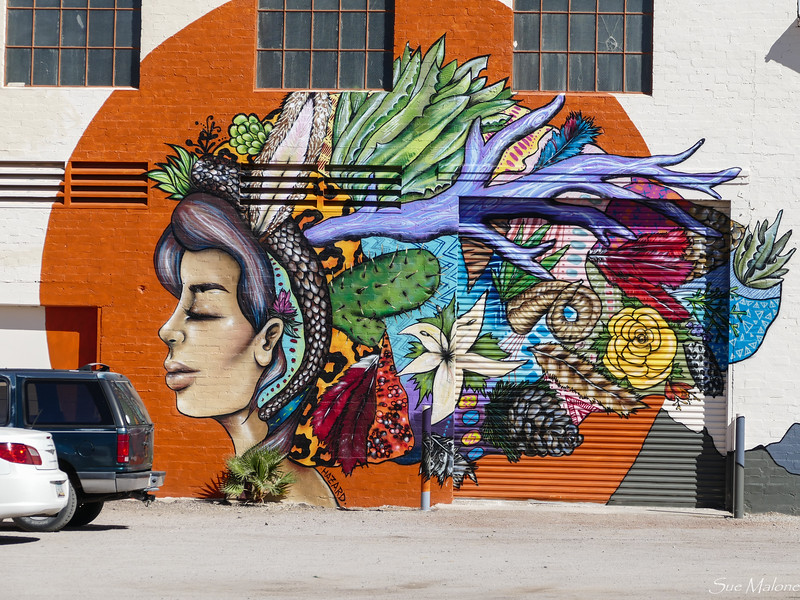 Continuing east toward Why, we passed Darby Wells Road, another well documented site for boondockers.  Would love to explore that one someday as well, but our friends were waiting and we needed to get on to Tucson.  We also passed the road leading south toward the Buenos Aires National Wildlife Refuge, where RV Sue and her crew were camped for a couple of weeks.  Those mountains along the western edge of the refuge looked really inviting.

We passed Kitt Peak, where google was kind enough to answer my questions regarding the huge observatory at the summit.  I guess the next time we go to Tucson it might be fun to take a trip up there to see the huge solar telescopes. 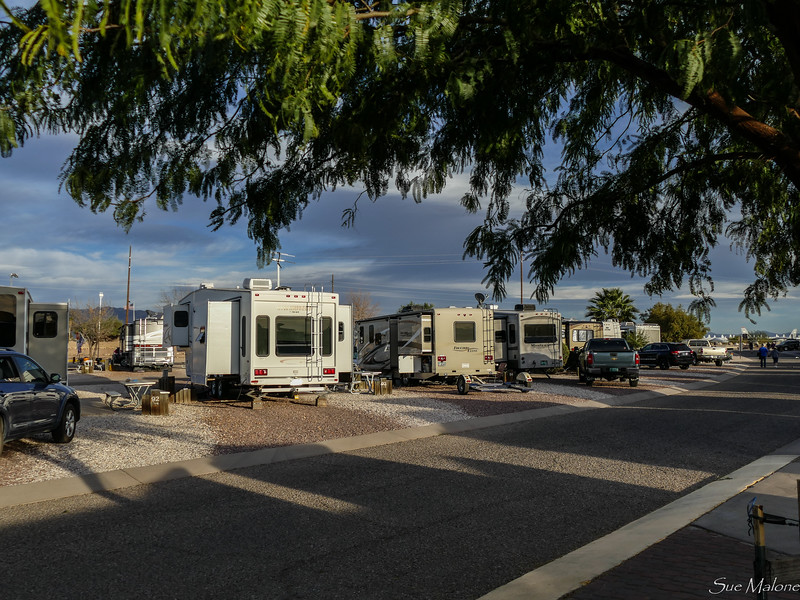 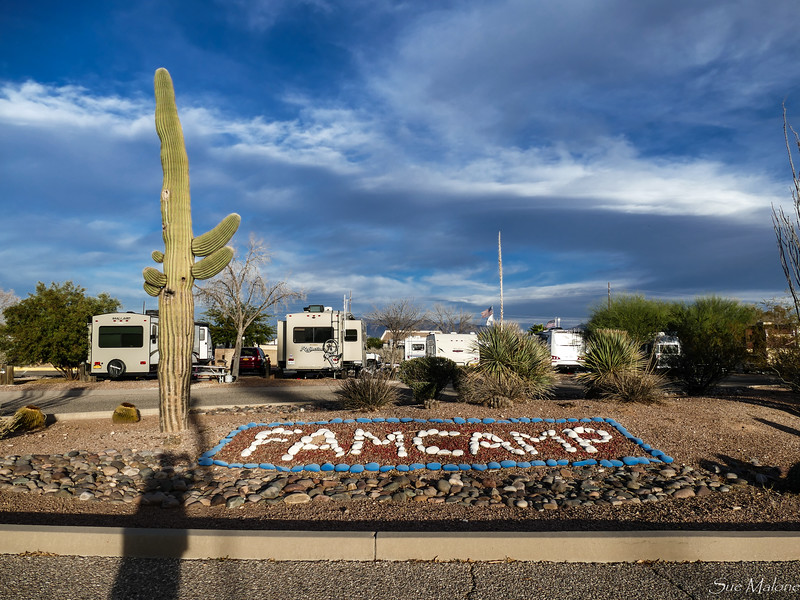 All our extra sightseeing delayed our arrival time at Davis-Monthan AFB to just after 4:30 PM, (we lost an hour to the time zone change).  We were delighted to see that the office was still open, but not so delighted to discover that the Family Camp was completely full except for the overflow area.  Overflow sites are $11.00 per night, and are the only way to eventually get into the full hookup portion of the camp, since there are no reservations.  The office people told us it was a 6 to 10 day wait for a site.  Hmmm.  At first we thought about just paying for 1 night and looking for a park somewhere, but were discouraged by the information that almost all the parks in the Tucson area were full, thanks to the famous Tucson Gem Show that was in full swing.

What the heck, we decided that dry camping for the four days we expected to stay in Tucson would be a piece of cake.  We had full access to all the amenities. 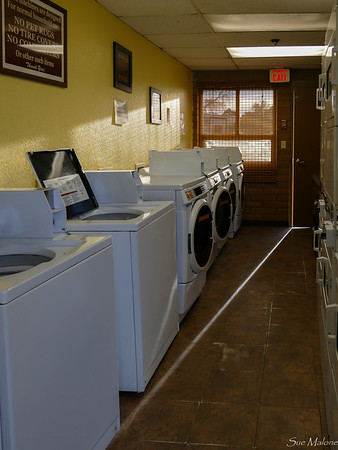 The laundry room with the cheapest and best machines on the road was just a hop from our rig, the bathrooms as well, with their nice big showers and hot water.  There was an easy dump site with air for tires, and potable water where we could take care of the necessities with a simple drive around the block. There is free coffee and cappuccino in the camp office, HD TV and full computer hookups with direct access.  Does anyone carry cords for direct card access any more?

We had terrible Verizon service, however, and that was a big surprise.  Verizon was fine elsewhere in the area, but at the base and nearby it was 1 sketchy bar.  We haven’t popped for any kind of boosters since we aren’t on the road all the time and have managed to do without, but it did get a bit frustrating while we were there.

We do love the family camp at Davis-Monthan.  It is clean and well maintained, and the base is big and has a great commissary.  Mui would love it, Erin.

There is a golf course, a movie theater, good gasoline prices at the on base station, a fitness facility and a pool.  We never have any time to really partake of all the stuff, but we did enjoy the dog park for Mattie, right outside our door.

In fact, we decided that dry camping at DM AFB is pretty darn nice, with the sites being spacious and much more roomy than the somewhat close sites in the main park area.  I think next time we come to Tucson, we will simply plan on dry camping and enjoy the openness and not bother paying the $22.00 per day for full hookups. 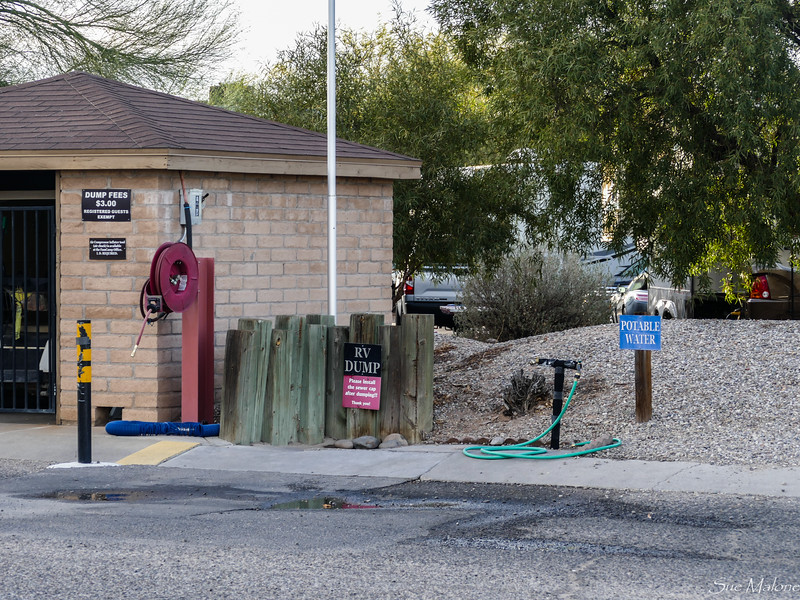 We knew the next few days were going to be filled with fun and friends, so enjoyed a bit of down time.  The generator only ran for a couple of hours so that I could process photos.  I did manage to keep photos processed on this trip, but didn’t even think about trying to upload them to SmugMug until we were safely back in Oregon with our full cable unlimited WiFi.  It certainly helped when I got back home to only have to do the writing without having to do all that photo processing as well. 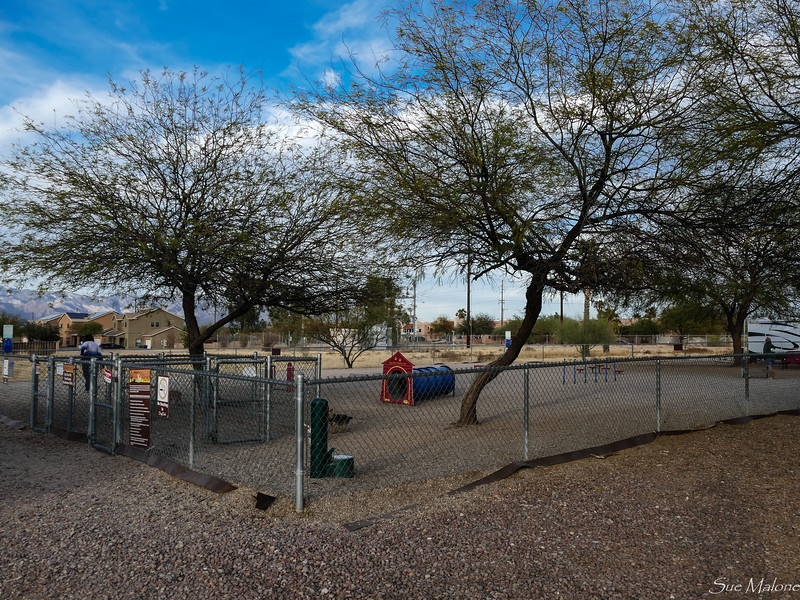 We spent the next few days with our friends, enjoying the dog park and walking with Mattie, and being treated to some of those fabulous Arizona sunsets. 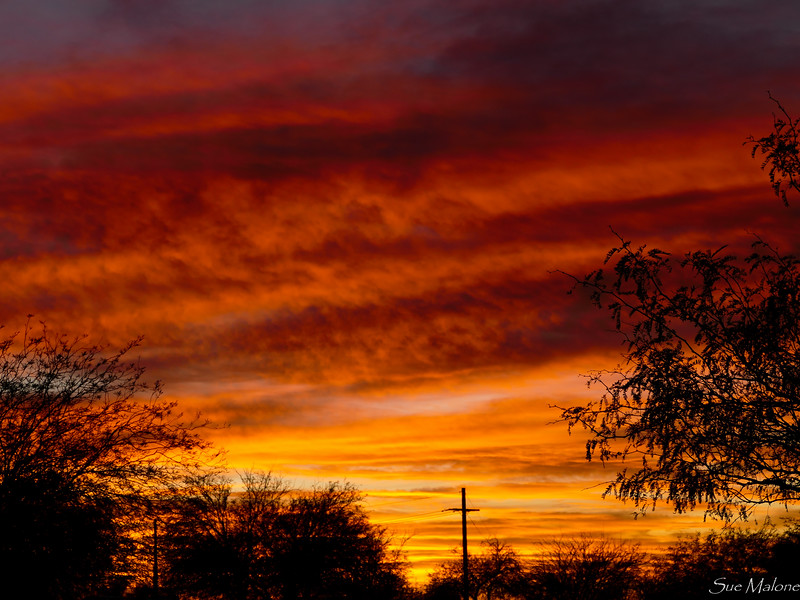 We even had an evening visit from a wandering javalina, who seemed to know exactly where he was going. 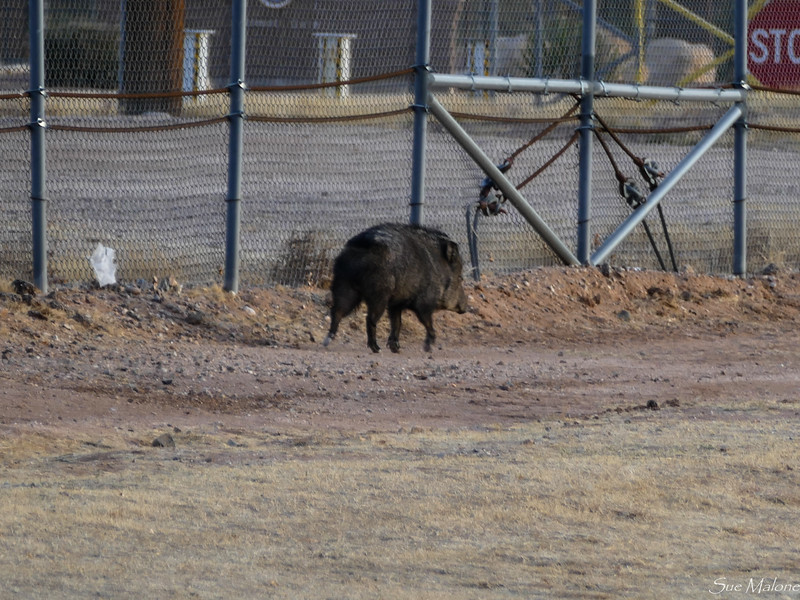 Does this qualify as a “the end” photo?