One of the reasons we decided to visit DC was a chance to visit the soils exhibit at the Smithsonian. We waited for the day with predicted rain thinking it would be a good time to be inside a museum. The rain never arrived and instead we were treated to another gorgeous blue sky and high winds.

The shuttle provided by the Comfort Inn in Falls Church has been a great service. One more time we enjoyed our free breakfast, boarded the shuttle for the Metro, and discovered that just a bit beyond our usual stop at Metro Center was another stop called Smithsonian. Hmmm. After 20 minutes of fast, sometimes swaying train travel, we emerged from the darkness right on Capitol Mall in front of the museums. Nice.

Mo has been to Auschwitz and this morning she suggested that we see the Holocaust Museum. “It might be difficult, but I would like to see it. I think it’s important”. I thought it might be like some of those difficult movies; sometimes we are better people for watching them. So we walked around the corner and down 15th street. Even though it was only 10am, the line had already formed for entry. Mo had said she wanted to compare the difference between the way the museum presented the Holocaust and how it was in Auschwitz. In my opinion, the best part of the museum was the depiction of the complexity of what led up to the Holocaust. The timeline showed how the German people were so ripe for change and full of fear that they bought into the Nazi propaganda. Walking through this display of human depravity was sobering. I have seen photos of the atrocities in the past. As a young person I read Exodus, and The Source, and always wanted to learn more, wanted to somehow understand. However, the image that struck me most deeply on this morning was an enlarged black and white photo of ordinary people in Germany. A lovely young blond girl was caught up in the excitement, her face lit up, enthralled, her arm raised in the Nazi salute. She was so young and looked so fresh and honest. I still don’t understand.

We left the museum sobered, wondering how anyone could say it didn’t happen. The photos of the US servicemen, when they found the camps, was also sobering. The history of what happened and how so many people didn’t believe it was happening was new to me. The magnitude of the Holocaust, the Pogroms, the hatred toward the Jews, made me angry to think of how this word “Nazi” is thrown around today in the political arena. Angry! It wasn’t easy, but it is important to see it. It was important to go there. Mo said Auschwitz was different, with less history portrayed, but being at the actual site had a different impact. 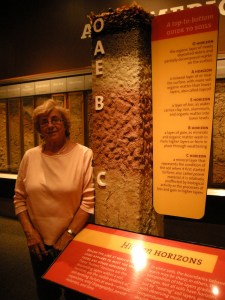 After that visit, we were quite ready for some time at the Smithsonian. We were ready for something light and airy and positive. Thinking a trip up the 70 second elevator for a view of the city from the Washington Monument would be nice, we headed back west. The winds, however, were gusting to 50 miles per hour and when we arrived the monument was closed for the day.

After that momentary disappointment, we continued to the Museum of Natural History and the soils exhibit. It was a ‘pleasant’ exhibit with a focus on many aspects of soil in our society. There was a bit of science, but as a working soil scientist, it was less than I would have liked. It was soils 101 for the layman, a good thing I suppose, but in other parts of the museum, science isn’t dummied down for people. The soil monoliths from all the states showed just how variable soils can be. I loved seeing them, but there was very little information about soil science as a science. After a short visit we wandered off into the halls to discover the rest of the museum.

It was magnificent, overwhelming, and educational; full of surprises and knowledge. I could have stayed in the earth science hall much longer than we did. Complex exhibits on plate tectonics, meteorites, earthquakes, volcanoes, rock building and so much more, enthralled me. We saw the Hope diamond, not such a big deal after all the other exhibits. After a few hours, both of us felt completely overloaded with information. The ocean exhibit itself is enough to keep you occupied for hours. When we finally started to leave, we realized that we hadn’t entered the mammals section. We detoured through rooms filled with more than 200 animals from all the continents. The display was in the typical style of a natural history museum with habitats and sound effects. We saw some animals neither of us had ever heard of. We could have stayed longer, but our brains were too full, and it was hard to absorb all we were seeing and learning. I hadn’t expected that. Overload! I had heard it was true. I knew that it was easy to spend a week just at the museums on Capital Mall. I now see that a full week isn’t enough to rest the brain in between subjects!

It was getting late in the day, so after visiting the Natural History Museum, we had to choose one other that we wanted to see. We decided on the nearby Museum of American History. It was much simpler, but still interesting. Especially delightful was the display of the First Ladies inaugeral gowns, and the history of their political styles and focus. A surprise was the number of First Ladies who were sisters, nieces, or daughters of unmarried presidents.
Very nearly brain dead after only one day, we made our way back to our Smithsonian stop on the Metro and went home to Falls Church. We ended our evening with a fabulous dinner at the Dogfish Head Brewery. Perfect day!