Once again we headed for a coast, but this time instead of the Oregon Coast our destination was the Northern California coast.  For the first time in the 13 years we have been traveling in this MoHo (not counting the two prior years in the baby MoHo) we had a guest traveling with us. 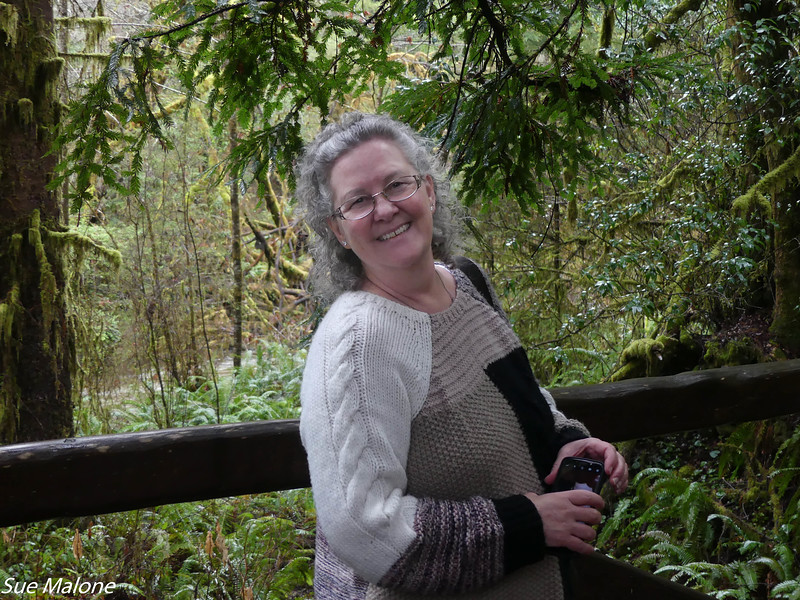 My eldest daughter Deborah often visits on Sunday mornings.  She only lives an hour away and comes to spend some time with us and with her son who lives across the street from us.  Especially in this time of COVID she and her son are part of our “bubble” and the visits provide a sweet interlude.  On one such visit, as we were talking about our upcoming travels, we came to a great idea.  Deb has been working from home, has had her first vaccination, and has lots of leave accumulated that she needed to use.  In moments, we decided that a joint trip in the MoHo would be a great way for her to use her leave. 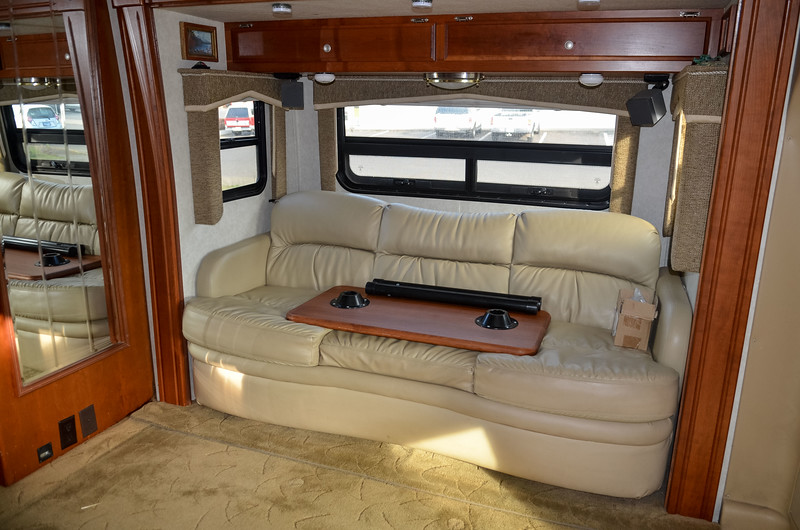 It was in 2013, three years after purchasing the MoHo, that Mo and I had the large sofabed replaced with a comfy dining booth with seats that make down into a reasonably comfortable bed.  In all that time, except for when it was first installed, we have never used the bed.  Mo and I tested it before this trip to be sure we remembered how to convert the booth to a bed and packed a large cushy sleeping bag for Deborah.

On this Saturday morning we woke to rain, but we had been following the weather and knew this would be the case.  Predictions for our six days on the road indicated rough weather for most of the trip.  Undaunted, we didn’t even consider trying to reschedule.  Changing dates is easy for us as retired folks, but not so easy for my working girl.  Besides, we were all excited for the trip.  Deborah works hard, has a partner who is disabled, so doesn’t get away very often.

The predictions for the weekend included rain and snow over some of the passes, including sections of Highway 199 that is our route to the coast from Grants Pass.  The predictions were just a bit off, thank goodness, with temperatures on our route remaining in the low 40’s and no snow except on the mountains around us.

For Deborah, the winding road along the cliffs bordering the Smith River was thrilling, with waterfalls cascading down the mountainsides at every turn, and the Smith at the highest level we had seen yet in our years of traveling this route.

When we began the trip, I prayed to the travel angels to be with us and let it be a memorable time for Deborah with no glitches.  The first day out lived up to every expectation in spite of the rain.  As we approached Jedediah Smith State Park the rain stopped and there were a few moments of sunshine peeking through the clouds.  It was Deborah’s first visit to the redwoods. 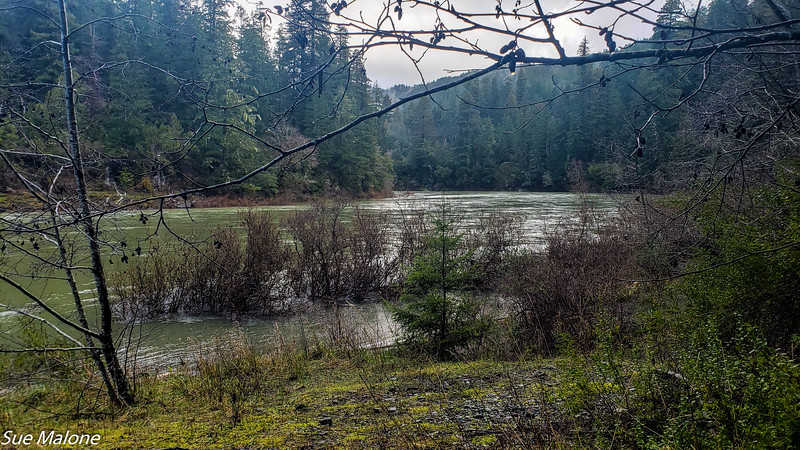 We parked the MoHo and took the Tracker on the park roads.  The campground had recently opened and the day use area was easily accessible.  The Smith River was running high and wild and people were fishing along the bank. The park road meanders beyond the river to a place where we know there is a very large tree and a little bit of a wide place in the road to park. 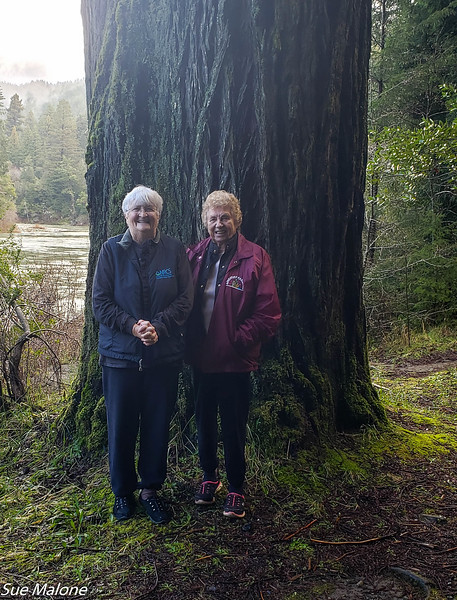 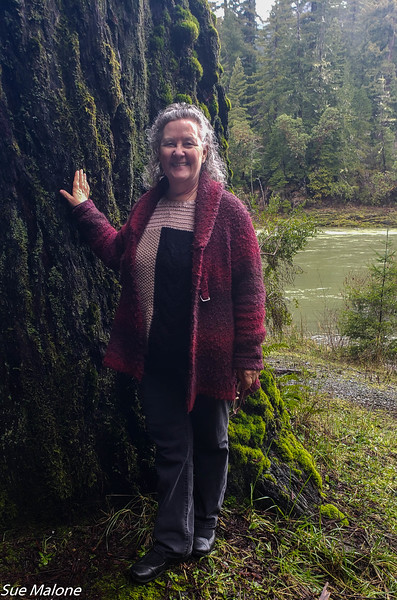 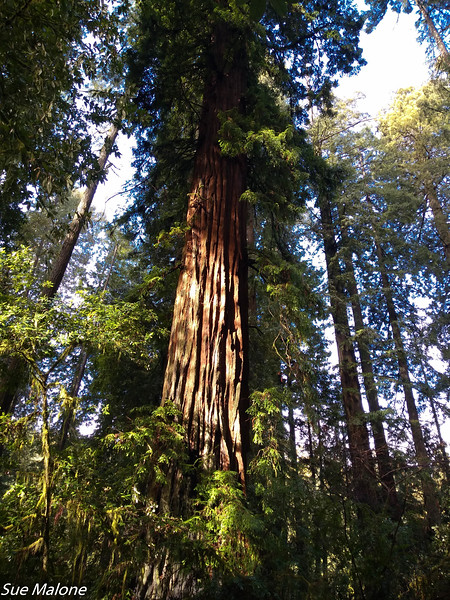 We stopped, the sun came out again, and we enjoyed taking photos of the huge tree that seems to draw us each time we visit this area.  I have photos of Nickie and Jimmy and Erin and Mui at this same tree.  I used the opportunity to teach Deborah how to do vertical panoramas with her phone the same way Erin taught me at exactly the same location. 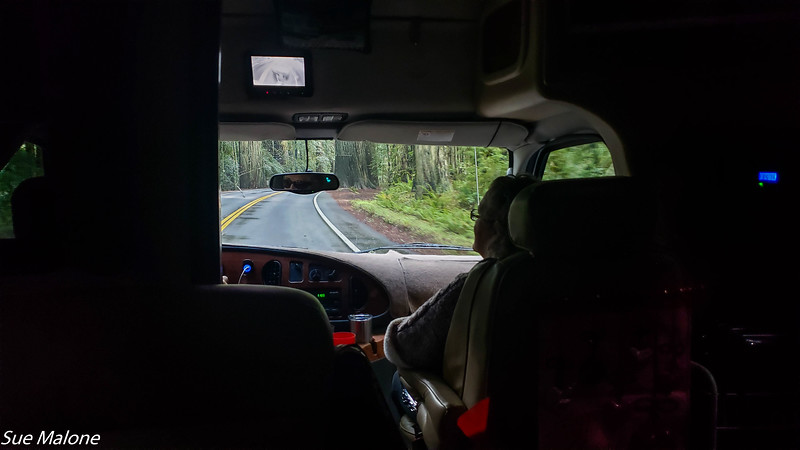 Leaving the park, we continued on the Redwood Highway toward Crescent City, with the mist making the redwoods even more mysterious.

Once again the travel angels were with us, bringing out a bit of sunshine and letting up on the rain as we parked at our favorite Chart Room to order fish and chips to go.  The dining room was open for inside dining, since numbers in Del Norte county are down.  Deb and I looked inside and it felt claustrophobic even though people were spaced well. 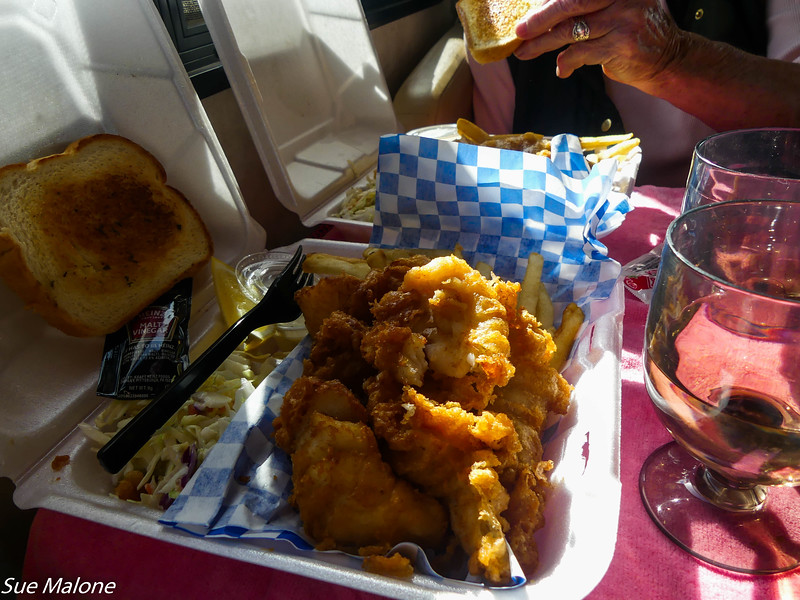 Sticking to our “to go” plan, we ordered our fish and took it back to the comfy warm MoHo for a perfectly fabulous lunch.  The servings are huge and we knew that there would be plenty for our early lunch and for dinner once again when we got settled into our park in Eureka.

Leaving Crescent City, we traveled along the coastal highway 101 through misty rain.  At a location about 20 miles south of town there was a traffic stop due to a huge slide that was being repaired.

As we were parked waiting for our turn to pass, we saw large amounts of mountainside continuing to slide toward the road. UhOh.  We were lucky to get through, and learned later in the afternoon that Highway 101 had been closed at that slide after we passed.  Thank you again, Travel Angels!!

Checking the map, we decided to take a short alternate route south for about ten miles that meanders through the Prairie Creek Redwoods State Park.  For reasons I cannot explain, in all our trips south on this route, Mo and I have never stopped at this state park.  It was gorgeous with huge groves of trees that seemed even taller due to the steep slopes on either side of the road.  We parked at the closed visitor center where Mo took Mattie for a walk in the meadows and Deborah and I ventured onto a short trail where dogs weren’t allowed. 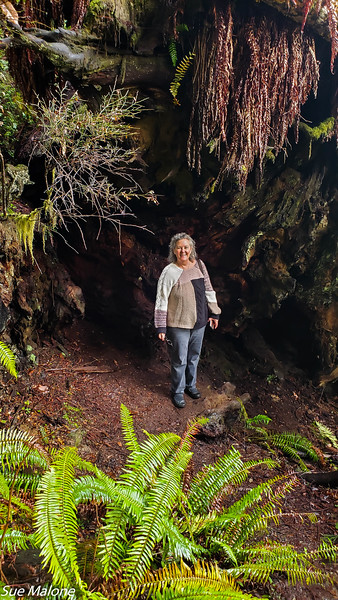 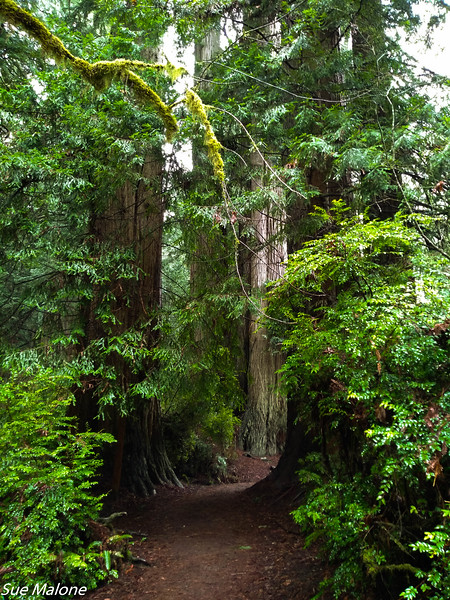 For Deborah, it was even more fascinating to be up close to the big trees in the beautiful groves along the trail. I had the camera and the phone, but Deb was the one snapping away with her phone.  I think she had more than 1000 photos when we returned at the end of the trip.  It isn’t easy getting good shots in the dark woods, but between the two of us we managed a few good ones. 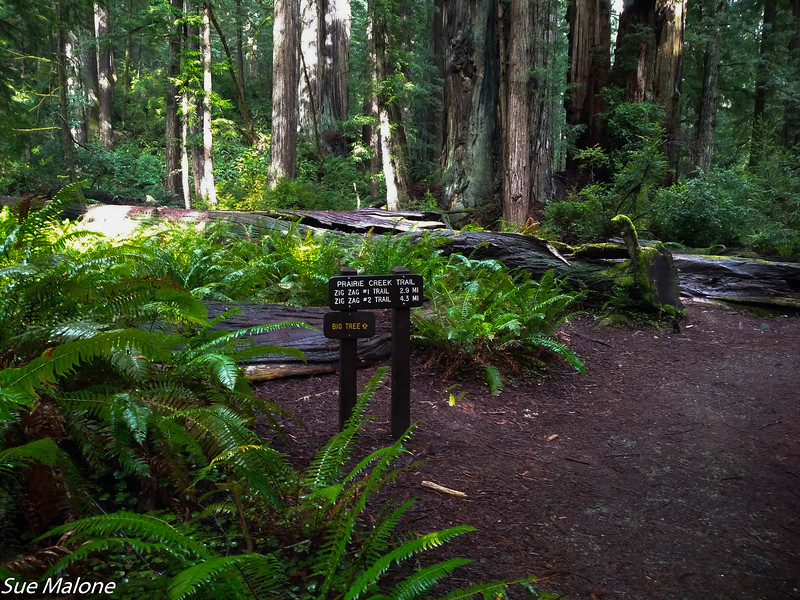 The rain held off again for our short hike, and only started up when we got back on the road.  By the time we reached Eureka, the rain stopped long enough for us to enjoy an easy setup at Shoreline RV Park, right on the edge of town close to Highway 101. 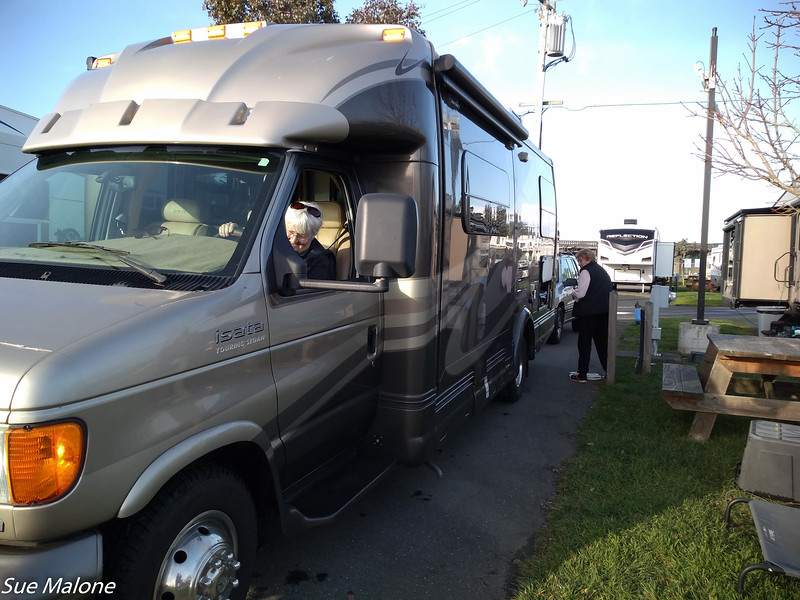 I think Deborah got a kick out of watching Mo and I do the unhook/setup thing since she hadn’t experienced it before this trip.  We take it for granted and are pretty quick at the shared process after so many years traveling together.

Mo and I have stayed at this park in the past.  It is convenient and close to town for exploring areas around Eureka, but not particularly exciting, with sites spaced fairly close together. Still, it was for only 2 nights and the main purpose of staying at this park was to have close proximity to Eureka and Samoa.

The biggest surprise of the evening happened when Deb and I decided to take Mattie for a walk and after crossing under the highway on a paved pathway found ourselves on the beautiful Eureka Waterfront Trail.  Completed in 2018 and meandering along the salt marshes of Humboldt Bay the trail was a complete surprise.  Reading about the concept and construction of the trail was wonderful.  The project is beautiful and a great accomplishment for the city of Eureka. 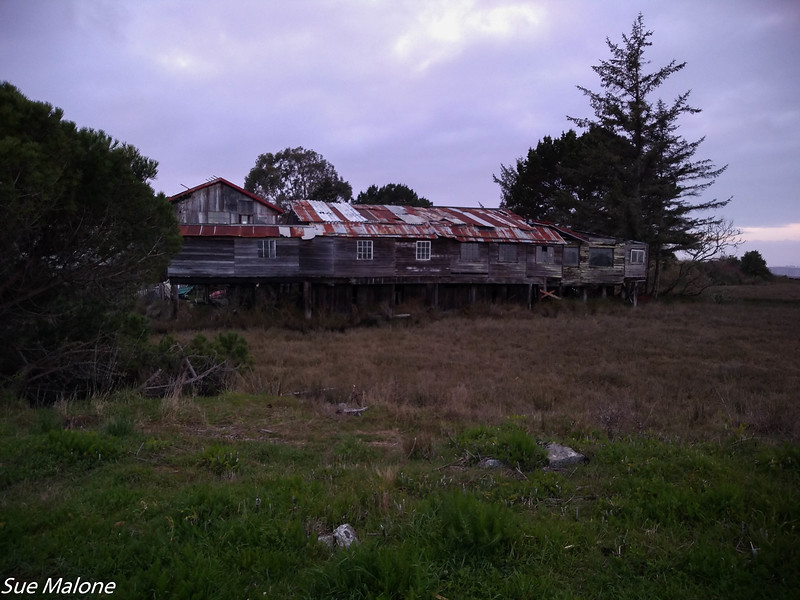 There were many interpretive signs along the paved path and long boardwalk.  We also enjoyed the creative benches scattered along the way, although it was too dark to get good photos of any of them

We walked much farther than we planned and it was dark when we returned to the MoHo.  Mo was getting a bit worried about what happened to us, and it hadn’t occurred to me to take a phone with me to explain why we were gone so long. After all, we were just taking the dog for a short potty break when we started out.

After our left-over fish dinner we settled in to watch a little bit of TV.  Seems as though the park now uses some kind of cable box for TV that requires plugging in a bunch of stuff to the TV. Ours is installed behind the wall and we have no easy access to the back of the TV without removing screws and such.  Instead we once again decided to try the mirror casting capability of the phone.  That wasn’t very successful at this park because there were so many rigs so close to us that the phone kept trying to cast to several tv’s that weren’t ours.  Funny stuff!

It only took a few minutes to shuffle things around a bit for Deborah to make down her bed. We settled in for the night listening to the rain on the roof of the rig, a wonderfully soothing sound for all of us.