When we woke on Saturday after such a foggy Friday, we were thrilled to once again see brilliant sunshine.  The temperatures had warmed a bit and the winds were quiet.  It was time to drive down to the beach parking area once again for a last walk. 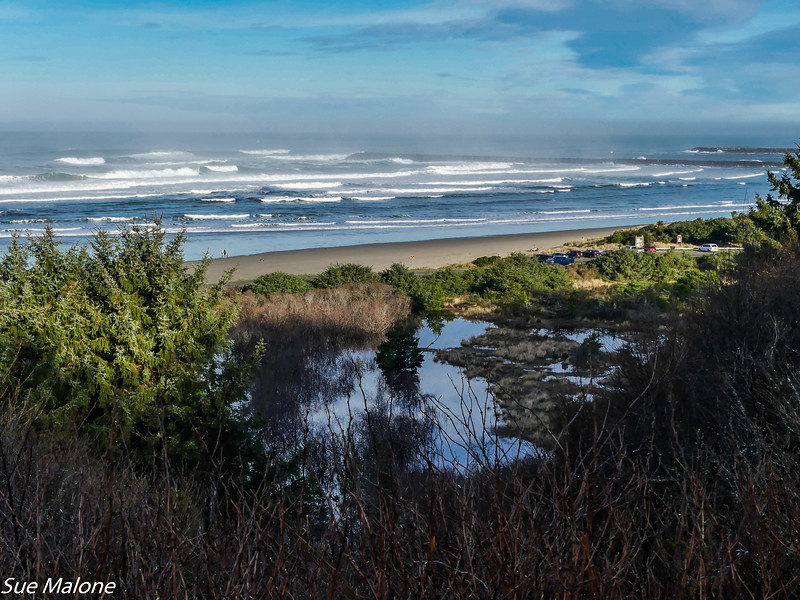 Being a Saturday on a three day weekend, the beach was already filled with people and dogs by the time we arrived around 9.  We had Mattie on a leash, but some people didn’t follow the rules and big and little dogs were running free everywhere.  One dog especially was a problem.

The owner of the dog told us that his dog didn’t like other females, but he didn’t leash her.  She was an older chocolate lab and we avoided them as we walked in a different direction.  We didn’t realize that he and his dog were coming our way until it was too late, and the big brown dog that was off leash came after Mattie.  It was too fast for us to pick her up which we try to do in these situations.  Instead, as the dog was attacking Mattie, I tried to push the lab away with my walking sticks as the owner came over trying to control his dog.  She wasn’t paying any attention to him but finally she backed off.  In the mean time, he started yelling at me saying I had no reason to beat his dog!!  Right!!  Am I supposed to just let my dog get injured??

I lost my temper, and yelled at him to get that dog on a leash!  I was so furious and my adrenalin was so high I yelled at him that I would beat him if I had the chance, along with some choice colorful words.  He said, “Yeah right”, but at least he didn’t come after me.  I was ready to light into him physically whether he killed me or not!  Don’t make an old lady with a cane angry.

It took awhile for my adrenalin rush to ease as we continued our walk toward the jetty.  The ocean was wild and the waves were huge and finally that inner shaking settled down as we watched the drama unfolding along the jetty.

People were walking along the edge of the rocks as the waves crashed over the sides of the jetty.  I heard one guy tell another one, “Hey Buddy, don’t be walking on that jetty today”.  Sneaker waves that sweep people away are notorious is this part of the Oregon Coast.

It was a lovely walk and by the time we got back to the car the bad guy with the mean dog was gone.  I was grateful for that since I had no more adrenaline for another confrontation.

We took our time packing up the rig, thinking we had until 2 PM to check out.  I thought it might be nice to get some photos of the rest of the campground in the sunshine.  As I relaxed in the MoHo working on those photos in Lightroom I suddenly saw a photo I had taken of a sign that said “Check-out at Noon”. 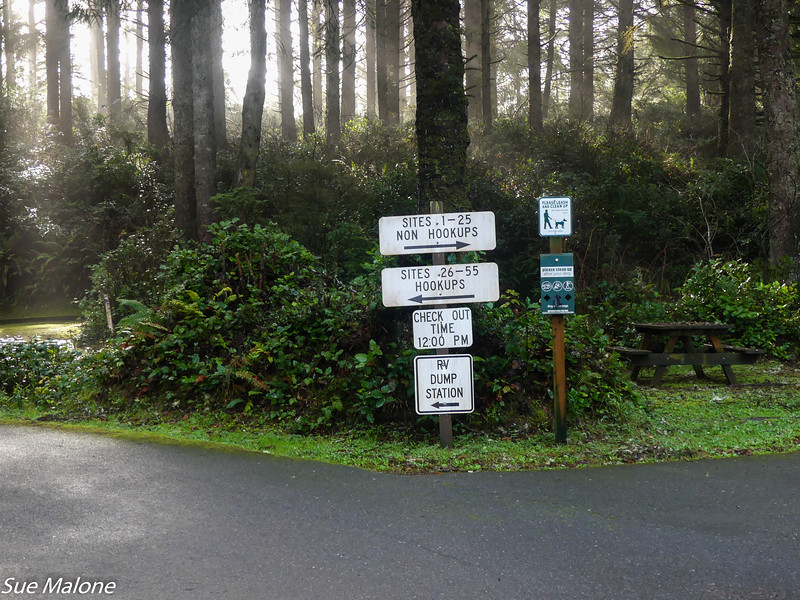 Our drive home over the coast range was gorgeous, with brilliant sunshine the entire distance.  We traveled Highway 42 again toward I-5 and then south toward home.  It was lovely driving in good weather and the weekend traffic was very light.  Delightful!  We fueled again at Seven Feathers to beat our Grants Pass prices and pulled into the driveway around 4 PM.  A perfect ending to a very nice getaway.

We enjoyed the beach and the campground was nice, but after our experience with all the people and dogs we decided that limiting our adventures to Oregon State Parks would be a bit safer for all of us.