The sun was shining on Wednesday morning when we left Eureka.  We knew that our weather on the route home from Eureka was going to be a bit of a challenge. The possibility of skipping the Trinity River and Highway 299 route east to Redding and instead driving back north on 101 was eliminated by the road closure due the the slide south of Crescent City. 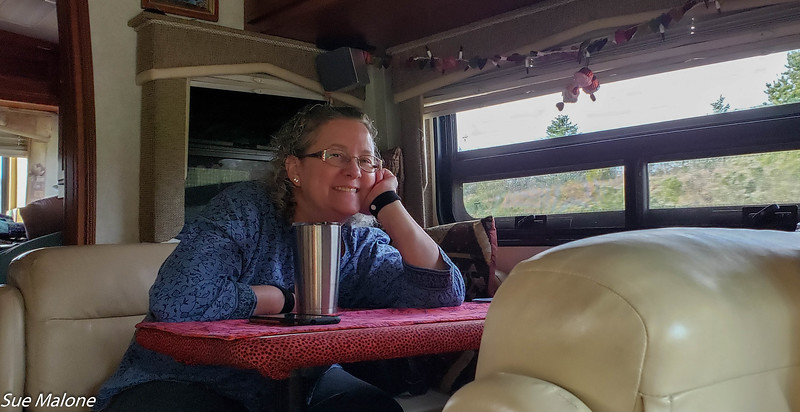 With weather predictions for snow on I-5 on the way home, we accepted the possibility that we might have to stop in Redding before we hit snow at Dunsmuir and Mt Shasta.  The other option was that we might have to stop in Yreka.   We thought about simply driving fast and going directly home on Wednesday, skipping our planned night of camping at Hayden Flat.  The thought was so disappointing to all of us, especially Deborah, who said she had no problem returning a day or two late since she was still on work leave for the rest of the week. 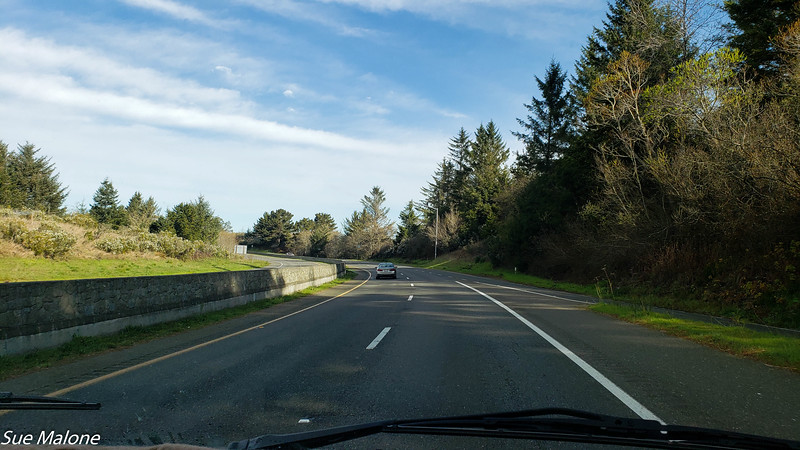 When we left Ferndale and drove back north to Arcata the sun was shining brilliantly and the weather reports for the day ahead were close to perfect.  Traveling east on Highway 299 is a beautiful route and the best way to cross the coast range of California from the ocean to the Sacramento Valley.  There are other routes that Mo and I have taken and said “never again” in the MoHo.

The initial climb to Berry Pass isn’t particularly difficult, with a few steep hairpin curves.  The road is wide and well marked and we arrived at the Burney Point Vista just west of the pass in time for lunch.  The parking area wasn’t full but there were several Cal Trans work trucks lined up.

Must be their lunch time too.  We parked with a view over the distant mountains, opened up the slide for comfort and settled in for a nice lunch.  The sun was warm inside the MoHo but it was brisk and breezy outdoors. 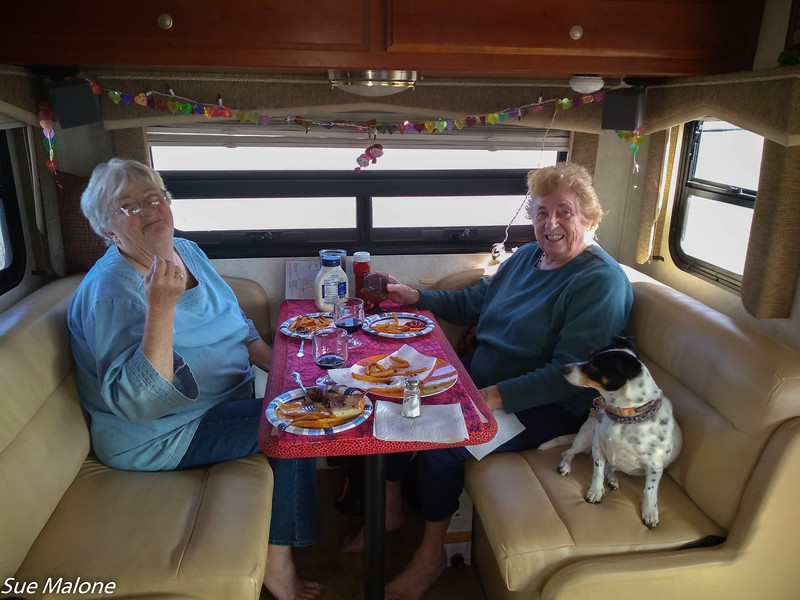 I brought out the frying pan and the olive oil and we managed to turn our cold limp french fries into something delightful for a yummy lunch.  Deb and I enjoyed a bit of the sandwich meat also heated up and much tastier than it had been the previous evening at the restaurant.

We switched drivers, so that I could drive and Deb could be in the front seat during the next section of highway which was much more curvy than the first part.  The route along the Trinity River is beautiful, climbing several hundred feet above the river far below and then dropping down again to river level. 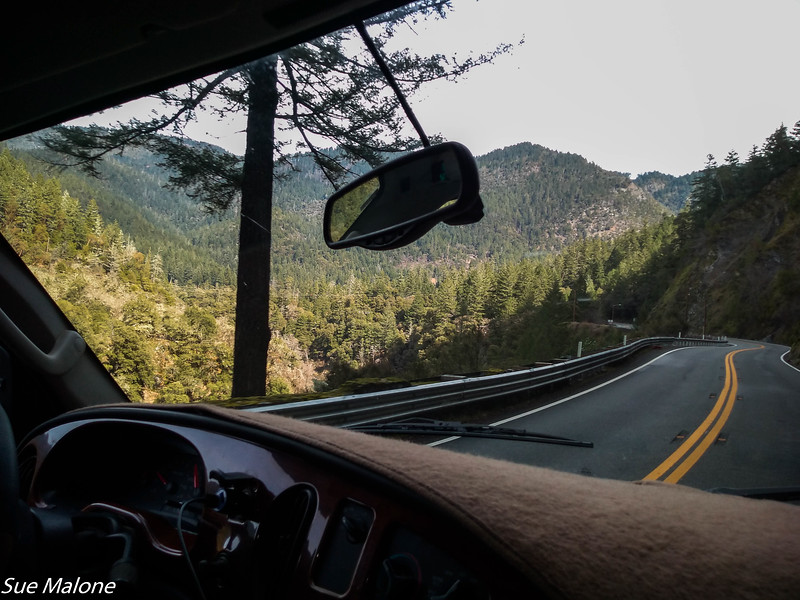 Mo and I had camped at Hayden Flat several years ago, and hoped to do so again.  There are two sections of the campground, with the lower section on the river side of the highway and the upper section across the road from the river.  As we approached the campground, we saw the road down to the river camp, but missed the turn.

It seemed impossible to get down there in the Mo Ho from the vantage point of the road.  As we continued a few hundred feet toward the upper camp we were disappointed to see strong green gates announcing that the campground was closed.  Previously reading on the internet (when we still had a signal) we also discovered that the upper camp had been converted to a group site campground. We wouldn’t be able to camp there without reservations even it if had been open. An important side note; we had NO internet signal on any of our phones from Berry Pass on Highway 299 until the next day as we approached Weaverville)

A bit disappointed we slowly continued east along the highway, exploring the possibility of boondocking in one of the wide flat areas along the river.  There are many access points and even a spot with porta potties for the many people who kayak this river.

Continuing past an RV Park which looked a bit iffy and very crowded, we decided to turn around and keep looking for a pleasant roadside night spot along the highway.  Surprise surprise!  On the return trip we saw a wide spot for Hayden Flat Lower Campground, and pulled off to check out the access road.

It wasn’t as bad as we thought.  We unhooked the car to drive down and explore our options and decided getting into the empty campground was a piece of cake.  I drove down in the motorhome while Mo and Deb walked around to select our site.

We finally settled on the perfect spot, with a fire ring overlooking the river and a nice level place for the MoHo.  As is often the case, an empty campground provides way too many choices to make it easy to decide where to be. The road was above us so there was a bit of road noise, but we didn’t imagine that would be a problem as evening progressed.  The sound of the river was loud as well, so that masked anything unpleasant that drifted down from the road.

Within minutes of getting settled in, Mo had unloaded the firewood and started a nice campfire.  She had packed enough wood for a possible fire on one night, and decided that it was time to get it going even though it was only 2:30 in the afternoon.  Mo does love her campfires.

We sat in our chairs in the warm sunshine, enjoying the fire, the river and a glass of wine letting the afternoon slide by peacefully.  Deb laughed and said she had wondered what we might have had planned for our time between parking and dinner.  She said we usually had some kinds of plans, but this time our only plan was to simply sit and enjoy.  She loved every minute of it. 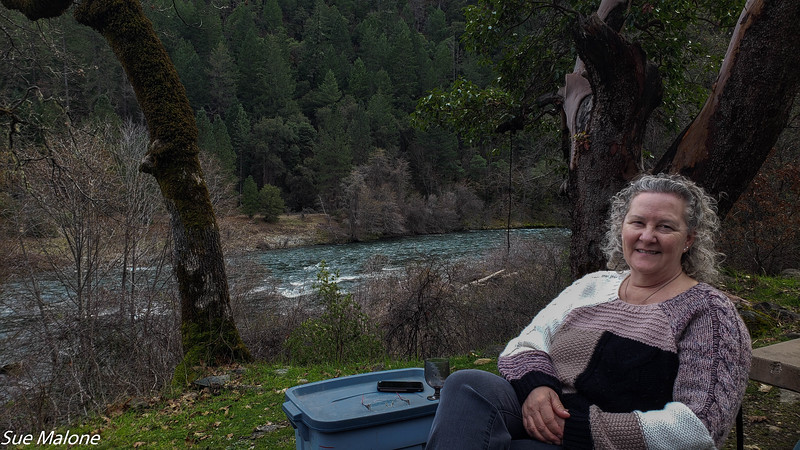 Our firewood was getting low and the fire was burning low as well when we all tried to find some kind of wood lying around camp.  Deb offered to drive off in the car to the RV Park we had seen earlier to get some firewood.  Sure enough she returned with a big bunch of wood for only 5 bucks.  In state parks it costs 5 bucks for about a quarter of what she got.  The extra wood extended our campfire long enough that we were able to heat the enchiladas over the fire and still have plenty of coals left for roasting marshmallows together.Dinner was delicious, with homemade enchiladas heated on the fire and another bit salad. 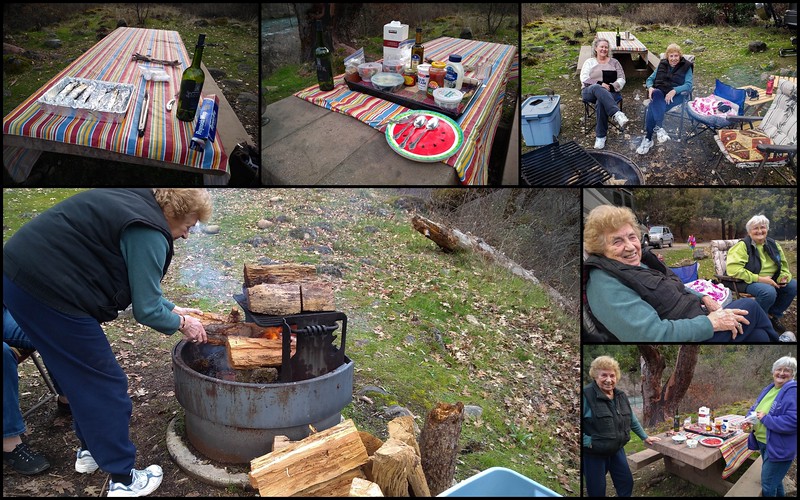 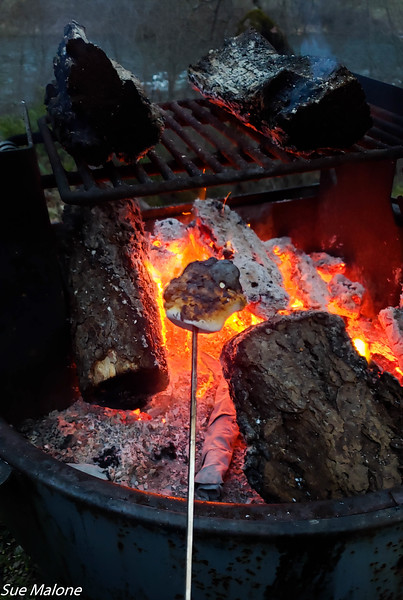 It doesn’t take much for Deb to notice small details.  This morning (a week later) a package arrived on the porch. It was a gift from Deborah thanking us for the trip and a nice little canvas case of telescoping marshmallow sticks!!  Yayyy!

The night was dark and cold and beautiful if not starry.  The clouds moved in shortly after sunset and we all slept well.  By morning, it was dark and dreary once again, and as we packed up to drive east the rain began. 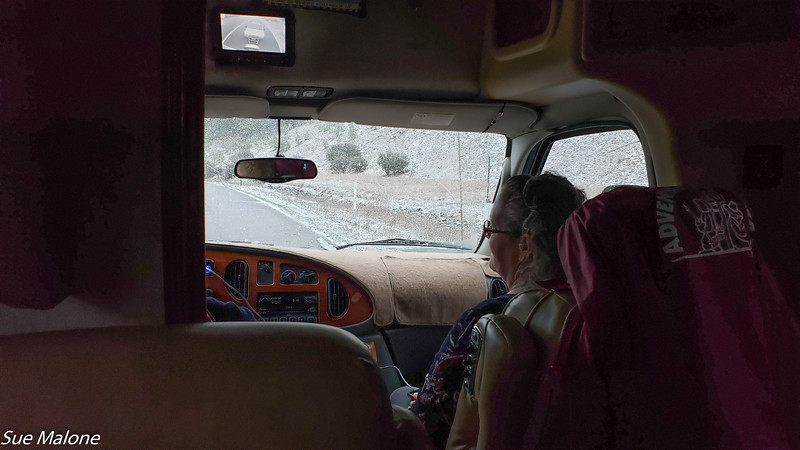 I drove for a time, following the river and watching the rain get heavier and thicker until it turned to sleet and then to snow.  We were still 50 miles west of Redding as the snow started sticking to the road in earnest.  At a particularly snowy summit we decided it would be best to unhook the Tracker.

Mo drove the MoHo and I followed in the Tracker.  As fate would have it, very soon after we passed the summit the snow once again turned to rain. 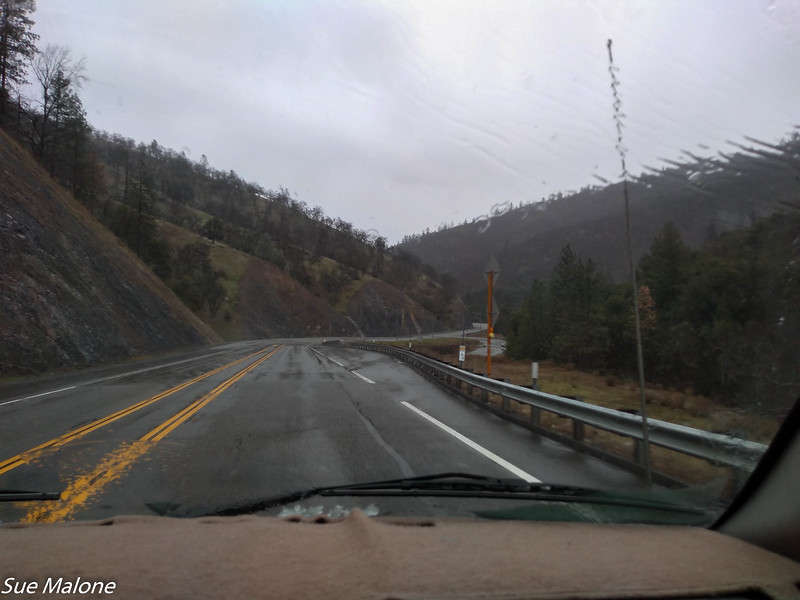 A few miles before we reached Redding we pulled over again to hook up the Tracker and continued toward town.  Stopping just outside of the city where 299 intercepts I-5, we once again checked the weather.  Although we thought we might stay in Redding for the night, the predictions for I-5 over Mt Shasta were encouraging.  Mixed rain and snow over Shasta was predicted, however the weather cams for Siskiyou Pass at the Oregon state line were daunting.  We decided to continue north toward Yreka with a plan to stay at an RV park there to wait out the storm. 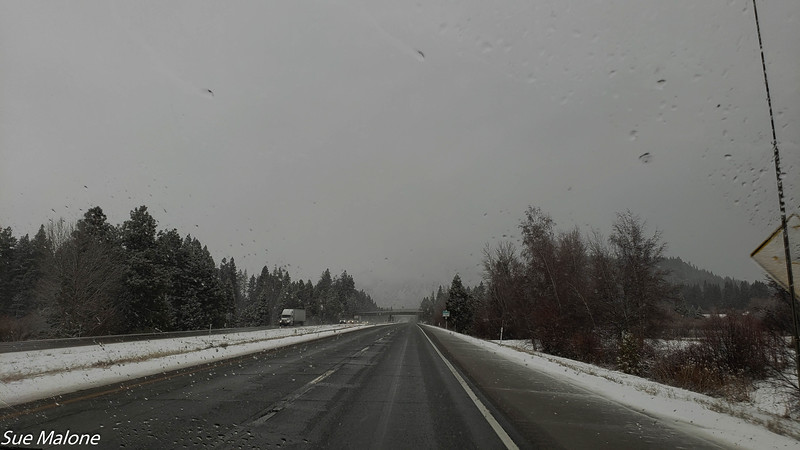 Crossing Shasta was easy, with just a bit of snow, but nothing Mo and I haven’t managed in past years traveling to and from Grants Pass on I-5 over Mt Shasta.  Once down in the valley south of Yreka the snow let up and it began to rain.  We searched the internet and found the Waiika RV Park.  Near the Rain Rock Casino, it was an excellent choice.

We pulled in, signed in, and settled in for a night of waiting and watching the weather cams over the mountains on our route toward home.  The park was pleasant enough, with a level site with full hookups, and very nice, very clean bathrooms with great showers.  A quarter for 5 minutes of good hot water seemed like a real luxury.  I used three quarters and I think Deb said she used 4.  Another big salad and leftovers for supper were perfect.

I don’t think any of us slept very well, wondering what the next morning would bring.  We didn’t know for sure if we would be able to get home or not.  As soon as it was light, I started checking the web cams, Trip Advisor, ODOT Road Conditions, and any other resources I might find to let us know how the route ahead was being affect by the weather.

We were thrilled to see that the route looked do-able and packed up the MoHo and were on the road by 9.  With only a tiny bit of ice and fog at the Siskiyou Summit we were pulling into the driveway at home by 11:15.  It rained off and on along the way, but once again for the last time on this trip the travel angels kicked in and the rain stopped just long enough for all of us to unload the car and the rig as we settled back in here at home. 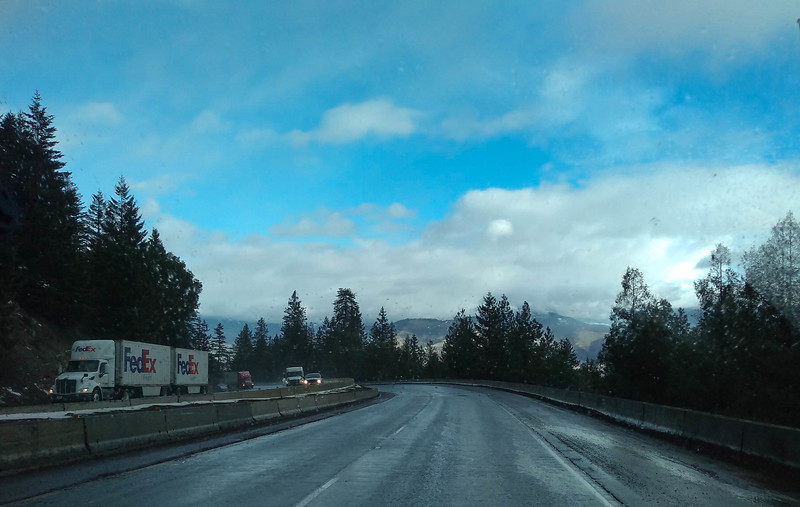 From the beginning to the very end it was a perfect, delightful trip and a wonderful way to share our travels with my daughter.  I will treasure the memory always.