It only took five hours for us to cross four states today.  Being from the west, where it can take two or more days to cross just one state, this was a new experience.  It flew by in a blur.  We left early because we had wanted to be sure that we arrived at Round Pond, the Military Family Camp at West Point, in time for our 3 PM tour of the historic academy.

When I first began planning our cross-country trip I had aspirations to actually camp in every single state that we traversed.  Time constraints made this impractical, and I had to back off a bit and decide that if we at least traveled through each state, maybe stopping at a park or buying fuel, it would qualify for a visit with the MoHo.

It was Mo’s turn to drive, and with great cell reception, I entertained us by reading out loud about the states through which we were traveling.  I read a bit about Massachusetts, and as we entered Rhode Island along the northern part of the state, I started hunting around on the internet for interesting facts about the state.  I didn’t even have time to read the entire Wiki article about Rhode Island.  We were in and out of the state in less than 22 minutes.  I didn’t even get to take a photo of the state entrance sign as Google Girl said calmly, “Welcome to Rhode Island”.

Somehow between attempting to read a bit about the state and navigating for Mo I didn’t manage to get a single photo of the state of Rhode Island during our 22-minute journey.

Our only previous experience with our smallest state was on our cruise to New England in 2011. Looking back, our day in Newport RI might have been the best day of the cruise.

We spent a day in Newport, completely aghast at the huge mansions and gorgeous views along the Cliff Walk.

Such wealth!! And such history as well.  I found it interesting that while RI is the smallest state in area, it is only the 7th least populated state in the country with more than a million people, most of them surrounding the capital city of Providence.  All I know about Providence is what I remember from a favorite TV show from many years ago called Providence.  The opening credits showed a beautiful city that I thought I might like to visit someday.

I barely had time to read this interesting tidbit before we were greeted by Google Girl once again letting us know that we were leaving Rhode Island.  “Welcome to Connecticut”.  Another sign missed as I finished reading this sentence:  “Rhode Island was unique among the Thirteen British Colonies for being founded by a refugee, Roger Williams, who fled religious persecution from the Massachusetts Bay Colony to establish a haven for religious liberty. He founded Providence in 1636 on land purchased from local tribes, creating the first settlement in North America with an explicitly secular government.” 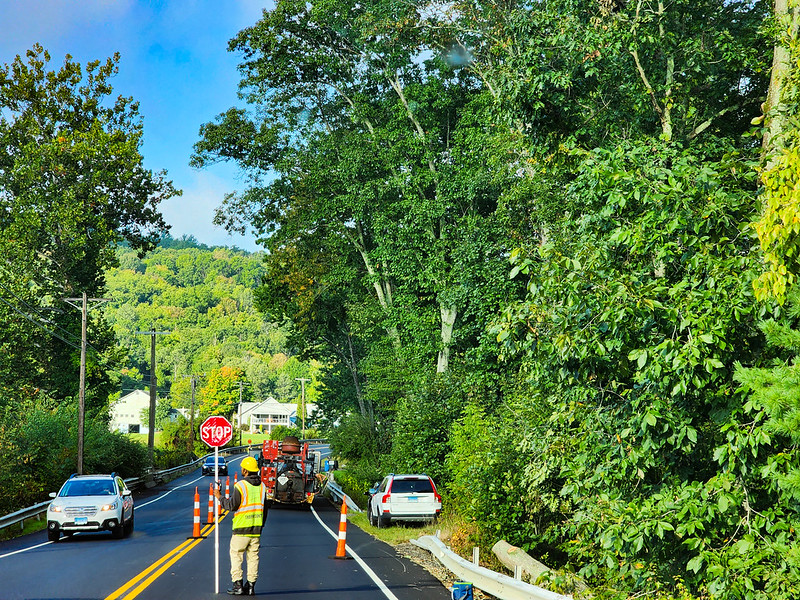 Our route through Connecticut was sometimes narrow and winding

In Connecticut, I had a bit more time to read in-depth about the state, and both of us were enthralled with the Revolutionary War history of the state as well as the great contributions Connecticut made to the industrial development of our nation.  It is the state with the highest per capita income, although the disparity between income in the northern part of the state is very high compared to the southern coastal portions and the capital city of Hartford.

We got a kick out of traveling the freeway through Hartford, thanks to the lack of a roundabout interstate.

On all sides of us were huge buildings with all those names we know so well in the banking and insurance industry.  Aetna, The Hartford, and many other familiar names.  No wonder Connecticut has the highest per capita income of any state.  I am sure there is much to see in the state, but we didn’t have time to dawdle.

When I made a reservation for Round Pond, the West Point Military Family Camp, I learned that the camp isn’t actually on the academy grounds.  Reading the website for information on the camp, I learned about the bus tours available to see the campus.  I was glad I read about these tours in advance because same-day tours aren’t available.  When ordering our tickets we had to upload our passports, driver’s license numbers, and photos in addition to Mo’s retired military ID to be cleared in advance for the tour.  We also were told the tour begins exactly at 3PM, with arrival suggested half an hour early.  Ok then…no dawdling in Rhode Island or Connecticut!

With an easy day of travel on good interstates and no traffic, we pulled into camp at 1:30 in the afternoon.

Plenty of time to get set up, make an attempt to get at least somewhat level, and hook up the power.

There was no water available at the campsite.  We took Mattie for a walk to burn off some energy while enjoying the gorgeous weather.

The campground was beautiful, especially this time of year when most of the tourists were gone.

The lake was open for kayaking but the swimming beach was closed.  We settled in and enjoyed the views.  One thing to mention is that the road from the highway to the camp is VERY steep and VERY curvy.  I am glad we read about this ahead of time and made sure that we unhooked the Tracker from the MoHo before we attempted the climb.  Even with a short rig, it would have been a challenge with the car hooked up.

We arrived early at the WestPoint Visitor Center for our tour

I thought it would be nice to explore it a bit, but the gift shop was closed and there wasn’t much to see inside.  A guide suggested we take 15 minutes to check out the West Point Museum, pictured above, but that seemed a bit silly.  What could we see in 15 minutes?

Our tour was conducted by “West Point Tours” in a somewhat dated school bus and much of the tour was simply driving through the base after we entered the security gates.  It wasn’t easy getting photos or remembering the details that our guide was explaining.  The one thing I remember is her trying to be “cute” saying, “Please do not approach, touch, or attempt to feed the cadets”.  Mo and I were not impressed with our guide.  She seemed bored by the whole thing and then would say really dumb things trying to be entertaining.  She wasn’t.

We did see a few cadets running along the road.

We did learn that the facility was properly called the United States Military Academy at West Point.  After riding through the winding roads of the academy we finally got off the bus for a short visit to the Cadet Chapel.

Dedicated in 1910 and constructed of native granite, the architecture combines the techniques and shapes of Gothic with the massiveness of medieval fortresses. This architectural theme is seen in other buildings throughout West Point.

The great Sanctuary Window, inscribed with the words of the motto of the Academy, “Duty, Honor, Country,” was beautiful in the afternoon light.  We also enjoyed sitting in the first pew where silver plates engraved with the signatures of previous Academy Superintendents are located, including Generals MacArthur, Taylor, and Westmoreland.

The organ key desk pictured above was impressive

There is a total of 874 speaking stops controlling 23,236 pipes. The impressive four-manual key desk is possibly the world’s largest “horseshoe” console. We didn’t get to hear the organ, but later I did find a video on YouTube to get an idea of what more than 23,000 pipes might sound like.

During our time at the Chapel, our guide talked about some of the details of cadet life at the Academy.  Rather than attempting to repeat all that she said, I will link to this discussion of the “West Point Experience”.  The culture of West Point is complex and interesting, and I have a different concept of what it might be like to attend the Academy after visiting and learning about some of the details of being a student in that elite school.

Leaving the chapel, we continued through the Academy grounds to the second and only other stop on the tour.  Parking near the Battle Monument, we walked to the edge of a cliff overlooking the Hudson River.  There our guide gave us a reasonably thorough rundown of the history of the Academy.  There is much written about this, but what I took away from this discussion was that George Washington was the founder of the Academy, with visions of a Civil Engineering School that he believed was necessary for the United States to thrive.

I took the following paragraph from the West Point website since my ability to write about this complex history is limited without plagiarizing from websites.

“The United States Military Academy was established in 1802, but West Point had a major role in our nation’s history during the American Revolution. Both the American patriots and the British realized the strategic importance of the prominent plateau on the west bank of the Hudson River. General George Washington considered West Point to be the most important strategic location in America and in 1778 selected Taddeus Kosciuszko, a Polish engineer, to design the fortifications for West Point. Washington later transferred his headquarters near West Point in 1779. American Continental Line soldiers constructed forts, gun batteries, and redoubts and installed a 65-ton iron chain across the Hudson to block British invasions along the river. Fortress West Point was never captured by the British, despite Major General Benedict Arnold’s treasonous attempt to turn over the garrison to the British in 1780. Today, West Point is the oldest continuously occupied regular army post in the United States.”

This interactive map was helpful for me to get a more clear picture of the grounds and the areas that we visited.

The Battle Monument was impressive, allegedly the largest granite monolith in the world.

The Parade Grounds were impressive as well, surrounded by statues of famous military figures in US history.

The tour lasted just over an hour, and Mo and I both decided that we were glad we did it, but not sure it was really worth the $19.00 per person fee.  It might have been a bit better with a more skilled tour guide.

By the time we returned to our campsite we were ready to settle in for the evening with a campfire and a movie.  It had been a long day with lots of driving and we were ready to settle in to prepare for the next day of driving. Our “touring” portion of the trip would now evolve into the “visiting” part of our cross-country trip. The next days of the trip were routed to visit people living in the Midwest that we don’t often see.