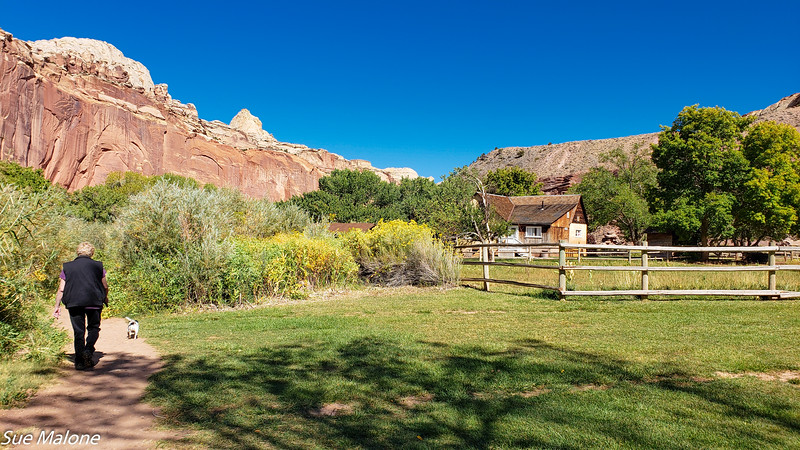 I knew from past experience that it was important to arrive at the Gifford House in Fruita very early if we wanted to score some of the famous pies.  We made sure we were on the road traveling the 11 miles into the central portion of Capitol Reef NP by 7:45.  When we arrived at the parking lot it was nearly full, with folks entering the little shop that had signs saying no more than 12 people could be inside at once.  Sure enough, pies were still plentiful, with 5 varieties available. I didn’t manage to take photos of the big buck deer with a nice rack wandering around to greet us.

After Chere and I bought our pies, we jumped in the car to quickly get on the Scenic Drive that begins adjacent to the Gifford House barns just east of the main Fruita campground.  We first took a quick drive around the campground so that Dan and Chere could check it out, but it was full and had been completely booked for months.  No matter, Mo and I have enjoyed the campground in the past and this time our camp with an open view and hookups at Thousand Lakes RV Park is perfect.

The Scenic Drive is 20 miles round trip, and ends at the trail leading into Capitol Gorge.  There are no words or photos that can actually capture the intensity of the vermillion, burgundy, carmine, and coral variations of color on the various rock formations of Capitol Reef.  There are 19 different geologic stratigraphic formations identified in Capitol Reef.  What I learned on this trip with the purchase of one more geology book about the area is that my adored Moenkopi formation actually has four different members!  Always something new to learn.

It was still early as we traveled along the narrow road, and the cliffs get bigger and closer and more impressive as the road continues south.  The first important side road is the short spur that leads to the Grand Wash trailhead.  Silly me, I suggested that we continue south to Capitol Gorge first and catch Grand Wash on our way back.  Things have changed a lot since our last visit in 2019.  But more about that later.

We stopped at the marker for the Golden Throne and laughed a lot at our attempts to figure out which large monolith was actually the throne.  Capitol Reef is actually named for the plethora of monoliths along the Waterpocket fold that is the main geologic feature of the park.  These monoliths are called by many names, including domes, thrones, cathedrals, temples, and chimneys.  After reviewing my geology book I finally figured out which of our photos was actually the Golden Throne.

At the end of the paved road is a large parking area with signs that prohibit vehicles longer than 27 feet traveling the dirt road toward the Capitol Gorge trailhead.  Dan enjoyed driving his nifty Suzuki tow car on the narrow road, grumbling at times at the stupid tourists in big fancy cars driving fast and taking their half out of the middle on the narrow dirt road.  By the time we reached the trailhead, the parking lot was filling quickly, and as we checked license plates they were from all over the county, with many plates from the eastern part of the US.  People have definitely discovered the national parks, even remote, previously unknown and quiet Capitol Reef.

The flowers in the protected canyon were wonderful, with several rare species that I didn’t have time to identify.

We decided to hike into Capitol Gorge for a bit, going as far as the Petroglyph Narrows.  The trail continues on a steeper uphill portion to the Tanks, which I hiked to many years ago, but it was too far to enjoy on this day.  We had other places to go and other things to see.  It was a lovely walk, with just enough slickrock along the edge of the wash that I could show Dan and Chere the delights of walking on slickrock, which is not slick at all.

We returned along the Scenic Drive with plans to hike into Grand Wash.  Entering the side road with cars in front of us and behind us we saw that the parking lot was packed and cars were parking along the entrance road.  We probably could have found a space along that road, but hiking with all those people wasn’t the least bit appealing, even in a place as wonderful as Grand Wash.  I’ll include a couple of  photos of Grand Wash from the time Mo and I hiked it in 2019.  I am sure that there were at least 50 people emerging from their cars as we drove away from the trailhead and probably hundreds in the wash.  So sad.  Hiking Grand Wash might require a commitment to arrive at sunrise, and maybe even then it might be more crowded than I would like.

Leaving the Scenic Drive, we drove back past the Gifford House with roads and parking lots completely filled and overloaded.  The visitor center is only partially open, but Dan dropped off Chere and I while he tried to find a parking place.  Happily, he was successful.  The bookstore was open, but the tee shirt selection was sad.  But as I mentioned previously, I was thrilled to find a great book on the geology of the park that I didn’t already own.  This one is just technical enough to be interesting, but has lots of photos and illustrations and maps.  Mo couldn’t believe I bought another Capitol Reef book but I loved it.

We decided to take the short drive east on Highway 24 toward the Petroglyph site along the highway.  There were hordes of folks lined up at the first viewpoint and more walking along the boardwalk that parallels the glyphs and hopefully protects them from vandalism.  We parked behind a huge tour bus, and when we returned it was gone and replaced by another huge tour bus.

The petroglyphs are considered to be from the Fremont culture which inhabited the valleys along the Fremont River from about 300 CE.  Of course, as with most estimates of prehistoric cultures there are various theories which are often disputed, especially by native people who consider their tribes as direct descendants of the prehistoric people that lived in the area.

We returned to the campground earlier than expected, but enjoyed the leisure time before supper to rest, walk the dogs, and catch up on blogs and photos.  Supper was a delicious shared meal created by Chere at our picnic table with a view of the cliffs to the north and beautiful sunshine.

After supper we drove 9 miles back east on Highway 24 to the Observation Point road.  There is a viewpoint that is at the end of the pavement that was full of cars and full of people.  We chose to skip that point and drove the half mile or so on the narrow dirt road back to the trailheads for the Goosenecks Overlook and Sunset Point.  Both trails are under a mile round trip, with a different view of similar landscapes at each point.  The parking lot was again packed full but Dan found a spot to squeeze into with the Suzuki.

We chose the Sunset Point trail because it looked as though there were fewer people taking that one up to the viewpoints.  The trail isn’t difficult, with only a few steps toward the beginning, and wide slickrock steps in some places. The drop off the cliffs is breathtaking, with the Fremont River close to 1,000 feet below. It is a great place to see the geologic strata in the park with the oldest rocks visible at the bottom of the gorge.

Mo and I walked back toward the east and Sunset Point where we joined many groups of people settling in among the rocks to await the sunset.  I love the view from this spot, with Mt Ellen visible in the distance and the red cliffs of Wingate sandstone lit up by the setting sun.  It was lovely, in spite of all the people that were around us.  It takes a certain kind of mental gymnastics to enter my own mind in the silence of the place, feel the expanse as if I were alone.  I am grateful that I have been visiting this park regularly since 1996 when it was an unknown place and people were few and far between.  Those days are gone forever I am afraid.

We walked back to Dan and Chere to watch the rest of the sunset.  Dan decided to hike up to the top on his own and surprised us when he popped out of a nearby drainage after his explorations.  He got some good photos of the deepest part of the gorge which is very hard to photograph in the contrasting light.

It was the end of a nearly perfect day.  We settled in for the evening with plans to travel over Thousand Lakes mountain the next day and explore Cathedral Valley. Little did we know that those plans would be thwarted by “stuff that happens”.  But that is for the next post.