Mo has made it an important priority to get out in the MoHo at least once a month.  Weather be danged, we need to go somewhere!  Often our winter getaway begins in late January and includes a week or a month or whatever it takes to get south to the warm deserts.  We had reservations in early February for a trip to Catalina Spa, but with COVID raging in Southern California finally decided that we needed to cancel or at least delay that trip until it feels a bit safer to be traveling to that part of the world.

We can stay fairly well distanced in the MoHo, but much of what we love to do in the warm deserts while near Palm Springs include dining out, spending time in the pools and the hot tub, and going to the big movie house with wine and comfy recliners.  When I called Catalina I found out that the pools are open, but the spa, restrooms, and all other facilities at the park are closed for now.  Ah well, time to figure out something to do in January since our early February trip is a bust.

Mo spent a bit of time researching coastal locations and parks and found a Coos County park near Coos Bay that sounded interesting.  When I called  Bastendorff Beach County Park the lady on the phone said we probably wouldn’t need a reservation and could waive the $12. reservation fee by just arriving, finding a caretaker, and picking a site.

We loaded up the MoHo in the rain the day before our departure, and planned once again to spend some time at the beach, in spite of the predicted rainy weather. The familiar drive north on I-5 was uneventful.  We stopped for fuel in Canyonville at Seven Feathers since they have the best price around, even less than the Love’s Truck Stop just a few miles north.  Neither of us can figure out why gas is sneaking back up again, and instead of the $2.29 we have been paying it has risen to $2.57 at our local Fred Meyer, and $2.45 at Seven Feathers.  I read some old blogs of mine recently talking about gas being close to $4. a gallon on some of our trips, so the complaint isn’t a huge one, just a bit of a surprise.

Arriving at the park right at 2PM we were a bit lost as we attempted to figure out the process of checking in.  We unhooked the baby car in the big parking lot and then saw a caretaker near the main office/garage and the mechanic took us inside to check for empty spaces.

He was surprised that the park was almost filled up beginning Friday night and we planned to stay through Saturday.  Both of us laughed when we looked at the calendar and realized that the upcoming weekend was the 3 day holiday weekend for Martin Luther King Day. We drove through the park a bit, first leaving the MoHo in his recommended site #46 with “an ocean view” before driving up the hill to a sunnier part of the park, minus the view.

We decided on site #69, long and fairly level, with a table and a firepit in a space that looked like it got lots of sun.  That was important to me for this time at the beach, and the older sites in the lower part of the park were intensely shaded.  It didn’t help that a storm on the previous night had left lots of tree branches and debris all over the camp road, and site 46 while somewhat level was surrounded by mud. 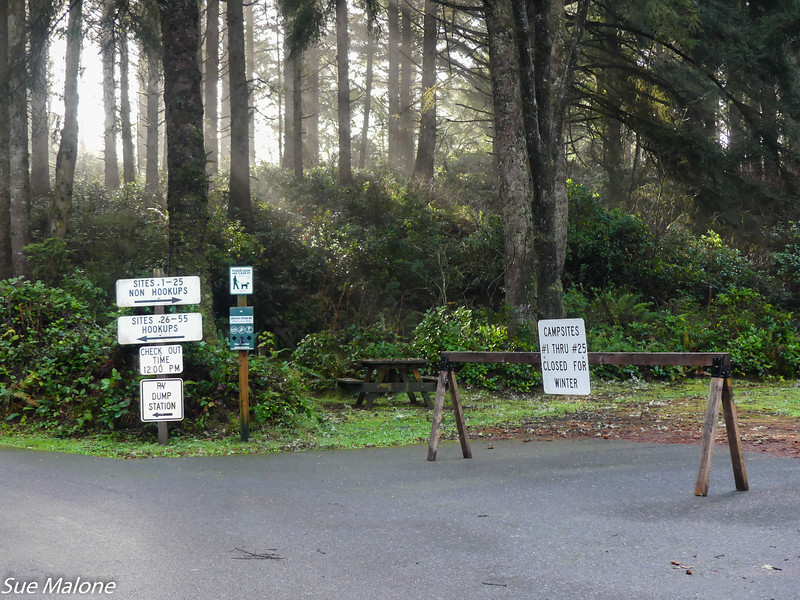 The roads through the park are quite narrow

Settling into our spot, we were quite happy with our choice.  Within a short time we were ready to bundle up and go explore a ‘new to us’ beach.  There are a few narrow roads north of the park that wind toward Coos Head and a Coast Guard facility high on the bluff overlooking the point where the water from Coos Bay enters the ocean.

There is a rock jetty on each side of the river, with the one by Bastendorff Beach having a paved walking path at the top of the jetty.  With high tide warnings and king tides ongoing this time of year on the Oregon Coast, we knew it wasn’t wise to walk on the jetty.

Instead, we walked down along the path that bordered the BLM off-road area that crisscrossed the sand.  There is no driving on the actual beach, but the off road section seemed quite popular.  There are also no enforced dog leash rules, in spite of what the sign said.  Someone later told me that the rules don’t apply to the hard sand portion of the beach where dogs can run at will.  We let Mattie run a tiny bit that first afternoon.

Heading back home to our cozy spot we settled in with a card game, casting a bit of live news from the phone to the TV, and enjoying a good pre-cooked chile verde supper brought from home.