When I last wrote, it was Tuesday morning and I was reeling from the overnight devastation that blew up in Oregon with very little warning.  I had no idea then just how extensive the damage would be, and wrote about our winds and our trees and our friends who had only disappeared the day before into the beautiful Cascades for a camping trip along the Rogue River.  It was a few days before we heard from Jimmy and Nickie (Out and About with Nickie and Jimmy) and if you would like to hear their version of this wild and wooly week, be sure to check in on Nickie’s blog. 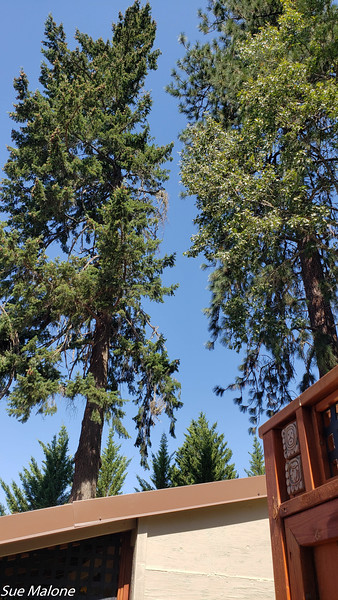 However, on Saturday when they arrived at our home here in Grants Pass, the skies were gorgeous and if memory serves me right, there were no big fires burning anywhere near us.

It was great to see them pull into the driveway and we were happy to share our home and fresh air with the refugees from fire and smoke in California.  Little did we know. 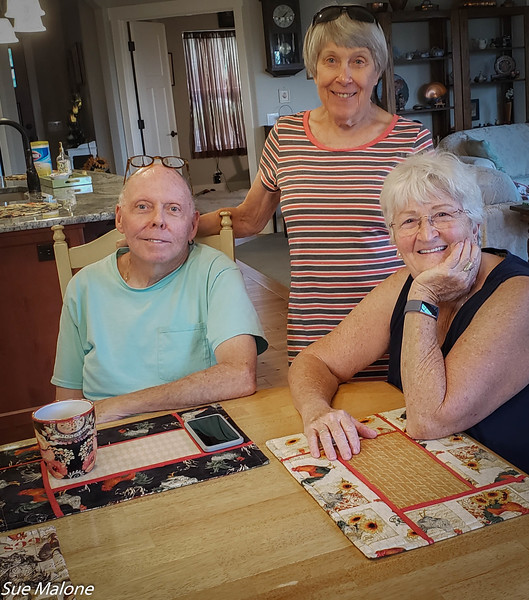 With much to catch up on since our last in person visit, we settled into the house for conversation and some relaxation before supper.  Even though our skies were clear, it was much too hot for al fresco dining on the deck, so I only stepped outside long enough to grill the marinated chicken for some tasty fajitas.

On a bit of a silly side note here:  I have to note how my word choices may have changed over the years.  I say “al fresco” much more often to describe outdoor dining since knowing Erin who now writes on FindPengiuns, and of course “tasty” was a favorite word of Awesome George the keeper of almost daily blog posts and many great “tasty” recipes.

But back to the weekend. Saturday was hot, but the air conditioning worked beautifully and dinner was enjoyable indoors.  After watching the weather predictions for record heat coming on Sunday we thought it might be nice to spend the day at the coast. It is just a 2 hour drive, much of it along the beautiful Smith River.  Highway 199 passes Jedediah Smith State and National Park on the way to our destination in Crescent City.  The entire idea seemed just perfect until the smoke began to thicken as we headed west.  What??  Smoky at the beach?  Unheard of! 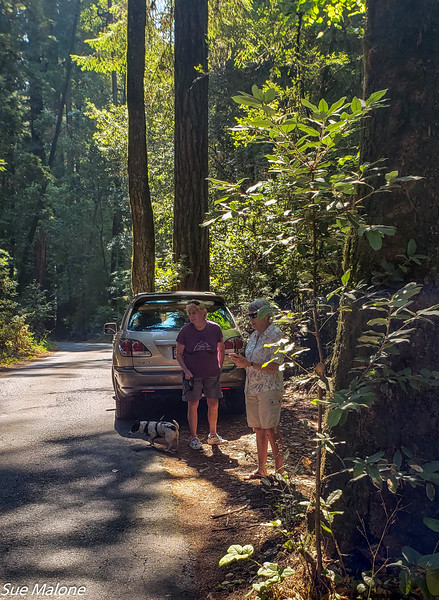 We watched the thermometer drop from 95 degrees at 10 AM in Grants Pass to just under 85 degrees in the shade of the huge redwoods in the forest at the park.  Even the smoke cleared a bit under the trees as they pumped oxygen into the surprisingly warm air. 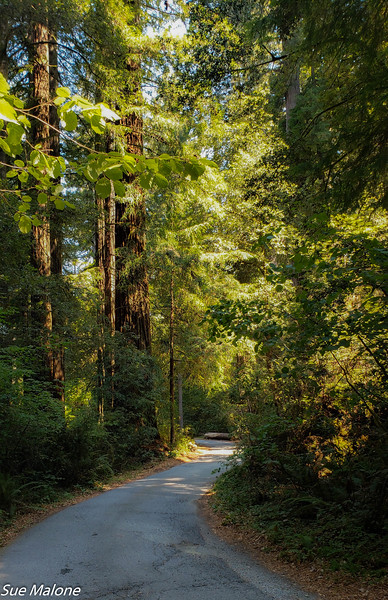 Driving into the park, we had planned to travel the back route along the Howland Hill Road but were told that road was temporarily closed at the end closest to Crescent City.  Instead we drove to the day use area, and as fate would have it, found one of the few open spots for parking right under a favorite giant redwood along the narrow one lane road.

In Nickie’s blog she mentions light traffic on 199, but as regular travelers of that road Mo and I kept remarking to ourselves that we had never seen so many cars heading toward the beach as there were on this day. Admittedly, we rarely go to the coast in summer, for this very reason, usually much too crowded this time of year.  On a day of record heat in the Rogue Valley, it wasn’t surprising that everyone was headed for the coast.

We enjoyed the trees in the park, laughing and trying to figure out how to get panoramas that would depict the incredible height of this magnificent tree.   Nickie wandered off, (something she does often), and came back exclaiming that she had found a trail along a river down the hill through the brush.  We followed her through the thick vegetation till we came upon a lovely flat trail surrounded by huge trees, ferns and thick vegetation.

The walk was superb until I realized we were in the midst of legendary poison oak, with some of the evil vines extending 20 feet up in the trees.  Time to turn around! Walking through poison oak isn’t too difficult if you don’t have a happy little dog along that wants to explore every single thing. 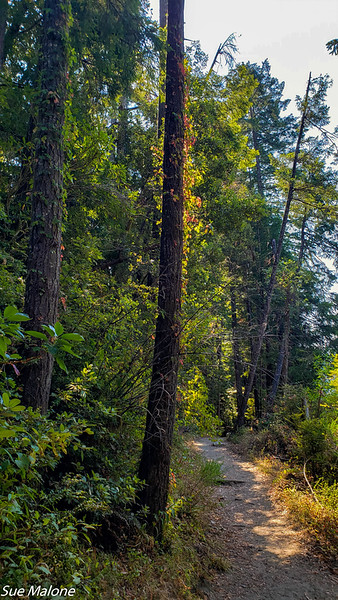 Yes, the red stuff on that tree is poison oak

We returned to the car and continued toward Crescent City and our major destination, The Chart Room.  It isn’t a fancy place, and dining is often accompanied by the loud barking of the resident sea lions that take over the pier.  Today they were out on the floating docks nearby, and the pier was thick with parked cars and many people lined up waiting for the same legendary fish and chips that brought us here.  The last time Mo and I were at this restaurant as we drove south last February it was a Monday and was closed.

We were really looking forward to the fish and chips, the predicted 69 degree coolness of the coast, and the fresh air.  Sadly, the temps were in the 90’s, feeling much hotter as we stood in the hot sun for 50 minutes waiting to place our order.  We then waited another half hour to receive the order.

Then it was a matter of deciding where to eat our glorious meal.  The beach was thick with people and hot with blazing sun.  No tables, nothing to sit on, no shade.  Instead we decided to drive south toward Crescent Beach looking for a parking spot.  Every single wide place in the road was filled with parked cars and people, people everywhere! 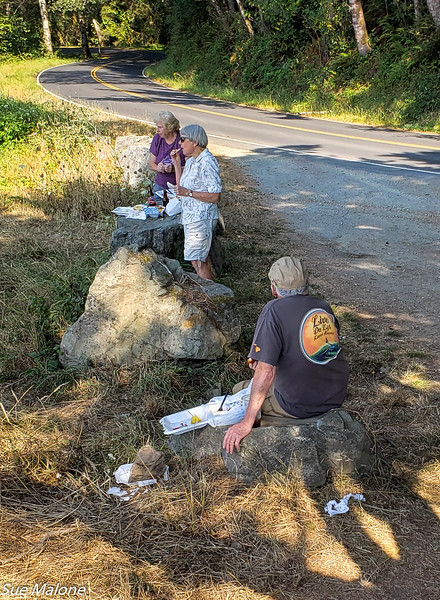 Driving farther south on a side road to the west of Highway 101 toward Endert’s Beach we were thrilled to not only find a space to park, but perfectly level rocks in lovely shade for tables and a distant view of the ocean below us.  I wasn’t sure if the fish and chips were as good as they seemed or if they were enhanced by what it took to get them and the fact that we were really hungry since it was after 2PM. 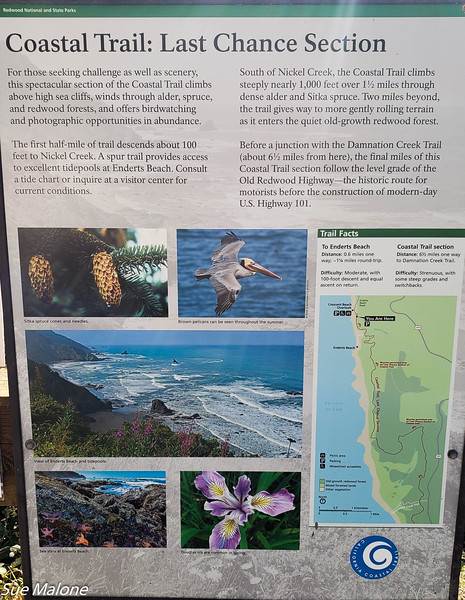 After lunch we continued down to the end of Endert’s Beach Road to the beach trailhead.  The parking lot was filled to the brim, but one of the little compensations of a crummy disease is that little blue card I can hang in the windshield that gives me premium parking when it is needed most.  We parked in the handicap site right by the bathroom at the head of the trail.

The sign said it was only .6 of a mile to the beach.  Piece of cake!  I hiked Boundary Springs, and National Creek Falls, and through the redwoods.  I could do a mile standing on my head. 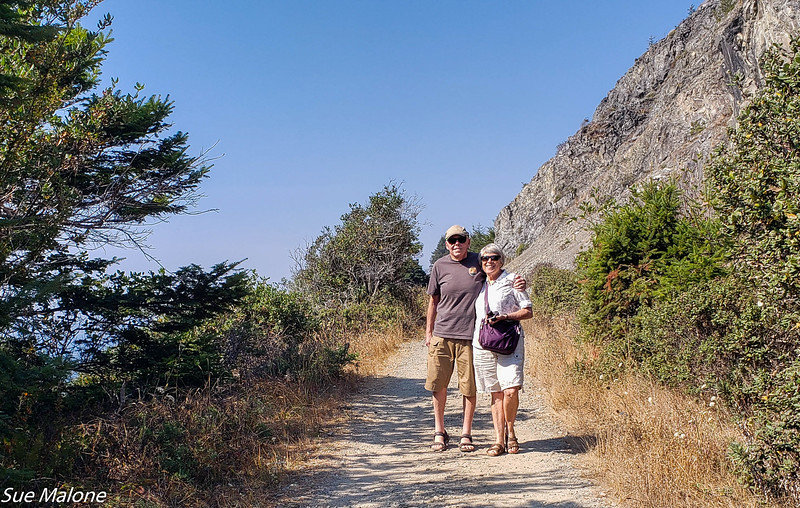 I discovered that a mile isn’t always just a mile.  The trail started out smooth and level but then descended rapidly over the coastal cliffs and ended at steep rocks that were a barrier that I couldn’t manage to navigate.

Even Mattie couldn’t go down and run on the beach because of the many other dogs off leash with the same idea and they were a lot bigger than she was.  Still, in spite of the struggle for me and the disappointment for Mattie, I was glad we did the hike.  It was hot and a bit smoky, but the little beach tucked away at the bottom of the cliffs was delightful. 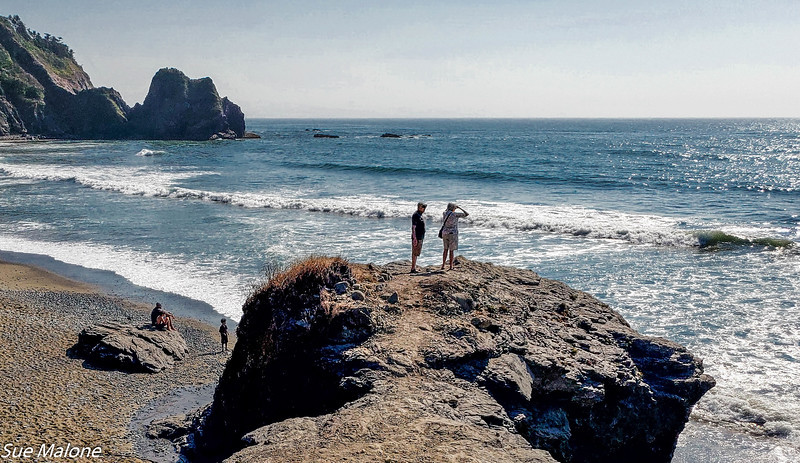 Back in the car we decided to try to find a spot of sand for Mattie to run free a bit, her favorite thing.  Mo parked across from Crescent Beach and took Mattie out to the sand.  She ran wild for about 20 seconds and then stopped cold and tried to run back to the car.  Either it was just too darn hot for her, or she was exhausted from all the previous hiking.  Our little girl is getting older, I guess, just like me. 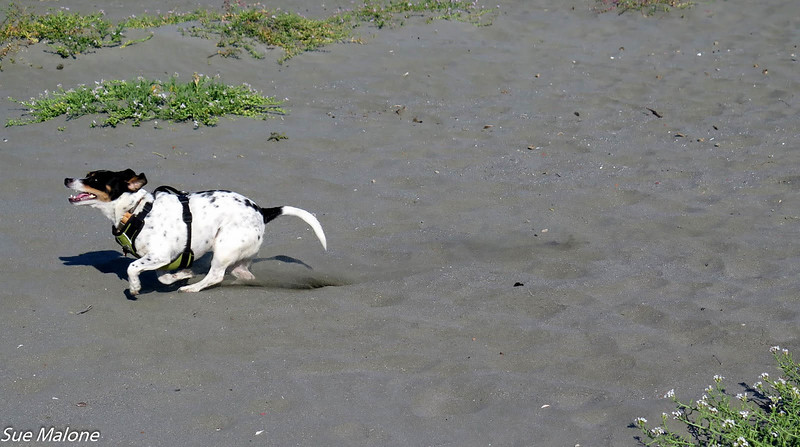 We piled into the car and I think as Mo drove home along the winding Smith River, all three of us and the dog slept at least a little bit.

Even though the smoke had been present at the beach, as we approached Grants Pass we were greeted with extreme heat and hot temps.  Dinner wasn’t needed after our late afternoon meal and we settled in to visit a bit before bedtime.  It was then that we heard reports of a wind advisory for the following night.

When we woke on Monday, skies were clear and except for the wind advisory, everything seemed to be just fine.  After more visiting, and waffles and farmer’s market peaches for breakfast, Jimmy and Nickie packed up their rig and headed east toward the Cascades for their camping trip along the Rogue.

Not one of us had a clue what the coming week would bring.  But that is the rest of the story.