Just a short note here: If you click on a photo you will be taken to the high resolution image on my SmugMug site and will also be able to see the entire gallery.

After breakfast this morning we loaded ourselves and the dog into the Tracker and headed north to find the fabled headwaters of the Rogue River, Boundary Springs. Even though I had downloaded the Google map for offline use, it didn’t work well enough to see detail. 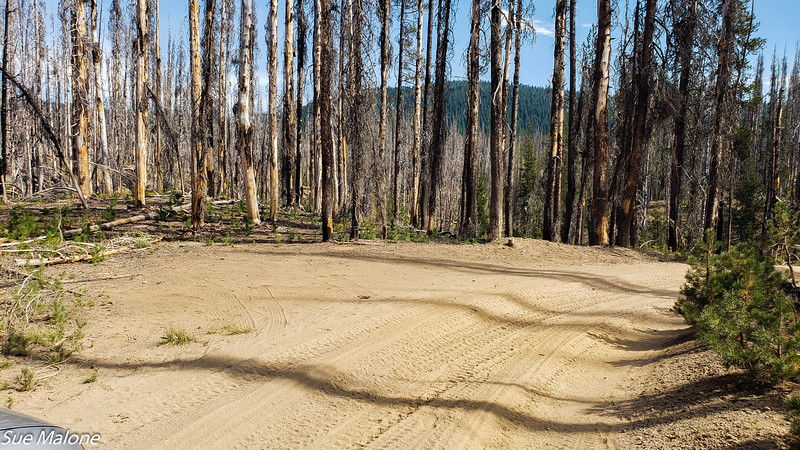 Following what was supposed to be the route to Boundary Springs, we bounced along the dirt on the Old Diamond Lake road for almost 4 miles to a small lake lake we thought was it. Google maps even binged that we had arrived at our destination, but the small lake certainly didn’t appear to be any kind of spring.

We drove back where the road crossed the Rogue River and I walked a bit up the trail realizing that we had discovered the upper portion of the Rogue River trail that we were fairly certain led to Boundary Springs.

Google was no help whatsoever, with a curving line of random white dots indicating the general direction of the spring.  Time to give up the search without more information at hand.

We headed back down highway 230 looking for a road we had seen previously leading to the National Creek Falls trailhead. In all this time on back roads we had seen no other cars or people. At the trailhead there was a large parking lot with room for a boondock site and the lot was completely empty. 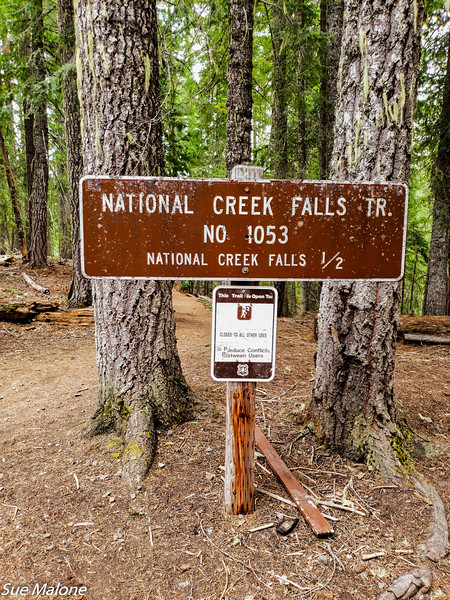 The trail sign said 1/2 mile to the falls so I figured I could do it. The trail was mostly easy down to the top of the falls but we couldn’t see below. Mo didn’t know if the trail went to the bottom but I couldn’t imagine the trail didn’t go to some kind of viewpoint. I knew it had to be close because we  were getting close to half a mile in distance according to my Fitbit. 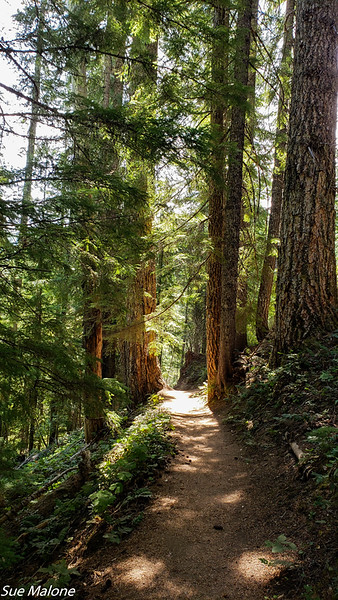 Sure enough after a few more switchbacks we were at the base of a gorgeous double falls. I am so glad we continued. Its hard for me to know if I am going to hold up so Mo worries about us going too far and not being able to get me back out.

I did OK. Up was a lot easier than down and we are both glad we made it to the waterfall viewpoint.  Standing in the cool mist and listening to the roar of the water was perfect for a hot afternoon.

Back to the rig the afternoon is still and muggy with heavy gray skies and fairly hot. Outside was better than inside but there wasn’t much air either way. Our friends from Rocky Point, Mata and Jim Rust, were to arrive at any time. We were ready with hot dogs and salad but didn’t have cell service to get any kind of message from them so we would know when they left Rocky Point.

We talked a bit about our day, and our plans for the next one.  Originally we had planned to visit Crater Lake, but decided that rather than going to Crater Lake we would backtrack to try to make it to Boundary Springs.

Mata and Jim arrived just after 3 in the afternoon. It was a nice reunion with cautious hugs all around. We stayed away from faces and I noticed I didn’t breathe while hugging.

Afterward we all sat nicely apart while visiting.  I noticed that we were a bit closer than 6 feet apart at the picnic table, but since we were outdoors and no one was sick or had been around anyone sick we felt safe enough.
Supper was nice and Mata brought peach upside cake. The girls shared Creamsicle cocktails with Jack and Coke for Jim, his favorite. They left a bit after six in order to get back over the mountain to Rocky Point before dark.

Mo started a fire but it was so hot and muggy that we couldn’t enjoy it much. Also, the chocolate filled marshmallows that I had purchased with such excitement were a bust. The chocolate had a weird flavor and wouldn’t melt even though the marshmallow got all runny and tasted very strange.

After dishes we were worn out and went to bed at 7:30 after running the generator for just half an hour. I noticed it had dropped to 11.9 and wondered about it.

Sure enough we were wakened at 5:30AM by the screeching CO2 indicator. The batteries were completely dead. Mo wasn’t able to open the battery cells before we left on this trip to check for water thinking we would have to take the rig in to get them checked. We hoped that low water was the problem and that the batteries at least take a charge. After running the gennie for two hours, we watched the charge drop again and simply put the rig on “store” for the rest of the day.

Hopefully we can get sealed no maintenance batteries when we get back home. That is what we wanted last time but we are not sure why we didn’t get what we asked for. It was something about availability but I will have to go back to our records to remember. We are lucky there are no posted rules about generator hours here. Our spot is fairly isolated with only one other rig several hundred yards from us. Thankfully our generator isn’t very loud.

We woke after a very dark silent night feeling ok about our options. We ran the generator long enough to charge the batteries and put the coach back on store for the day. There was nothing in the fridge that would spoil and it stayed cool enough with the doors closed. Ice cream was a little soft by evening but we could live with that.

Our first instinct to give up and just go home dissolved with the light of another pretty day ahead. Even though a camping trip is a goal in itself the other goal for this trip was to view the headwaters of the Rogue River and I didn’t want to miss my chance to get there.