View from the Path, with smoke from the fires showing on the mountain above Montepertuso and over the sea

Waking up on Sunday morning was lovely.  The bells on the big church just behind our apartment started ringing early, and the clarion call sounded lovely echoing around the village.  We had noticed the bells on other days, but on this day they rang several times. I am sure that the odd hours were announcing another mass for the townsfolk.  99.7 percent of Italian people are Roman Catholic.

When we first arrived in Montepertuso, Enzo was emphatic about making a reservation for us at a local restaurant, famous for its fish and wonderful food.  We finally settled on Sunday night for the reservation, but by the time Sunday rolled around we knew that we needed to be ready to catch the train on Monday morning and didn’t want to go to dinner.

Neither of us are particularly attached eating fancy meals at expensive restaurants so it was an easy decision.  Dinner at Ristorante la Terra would have cost at least 100 EU.  We chose instead to spend that extra money on our tour day of the ruins and skip the expensive dinner.

The day was gorgeous and sunny, with only a slight breeze.  Both of us were so appreciative of the fabulous weather we had enjoyed throughout our entire week on the Amalfi Coast.  In spite of the winds, it was a perfect week.

We saved the famous hike along the cliffs for this last day.  It seemed like a fitting end to our visit.  There is much written about the Path of the Gods, and it is something that should be experienced during any extended trip to the Amalfi Coast.

The path itself follows the cliffs along an 8.7 kilometer trail from the town of Bomerano to Positano, along routes that have been used for centuries by farmers taking their products to market on the backs of donkeys. Each end of the trail has magnificent views of the Amalfi Coast and the beautiful farmed and grazed terraces gracing the steep slopes of the limestone mountains.

We knew that we were a bit worn from our week of stairs and hiking and with a bit of discussion decided that we would rather hike only part of the trail.  The length was less daunting than the fact that we would have to take the Mobility bus down to Positano, catch the Siti Bus to Amalfi, and catch another bus to Bomerano to access the trailhead at its southernmost entrance.

Instead, we decided to take the Mobility bus up to Nocelle, get on the trail at the access point there, and hike as far as we could manage before turning around to retrace our steps.  With my knee and vertigo, this seemed like a much smarter idea.

The bus was a bit late, as usual, but wasn’t a deterrence since we knew we could spend as much time as we wanted on the trail and catch the last bus going back to Positano via Montepertuso from Nocelle at 7pm.  The bus was also quite crowded, with many people choosing to hike only part of the trail as well.

It was a hot afternoon, and right at the entrance to the trail in Nocelle was a lemonade stand with lemon granitas.  On my!  This is nothing like ordinary lemonade although I have no idea what makes it so luscious.  Perfect start for our hike.

We walked a bit through Nocelle, meeting many folks coming our way from Bomerano.  Mid afternoon was a perfect time to be walking in the opposite direction as all those very tired hikers.  The standard question, “How much further”? was repeated often, with smiles and laughter and some big sighs for some.  The village is a lovely place, much smaller than Montepertuso, and the path is lined with small villas, a tiny grocery store, and a few eating places. Cars must park at the entrance to the village near the bus stop.

The path is through Nocelle is well marked 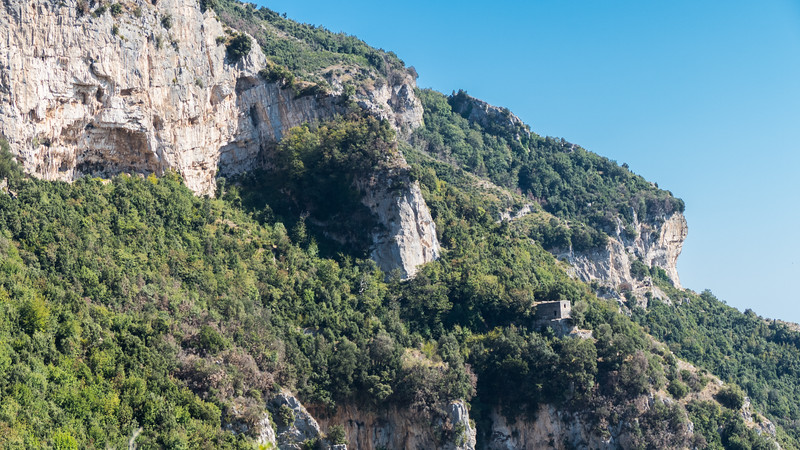 If you look closely, you can see our path on the right beyond the stone building along the cliff

I am not sure how long we walked, but after we climbed this particular set of stairs, we came to an area that was basically a rocky cliff.  There was nothing to break a fall to the sea below, far below. 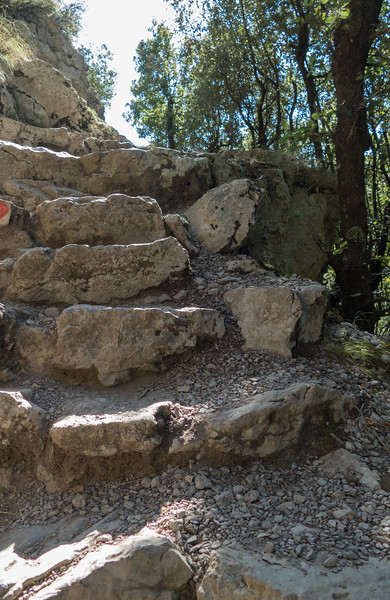 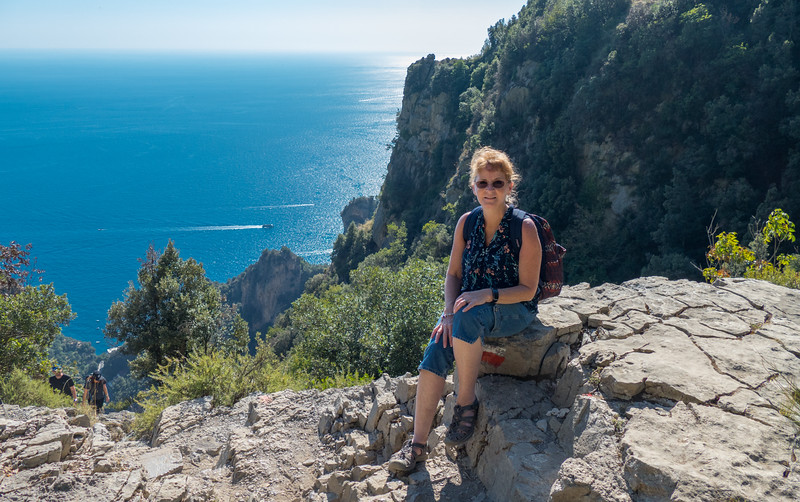 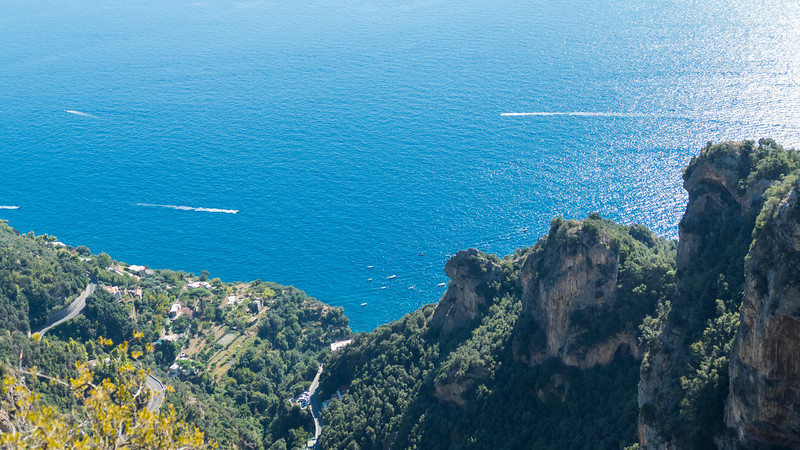 We had been hiking for 90 minutes or so, and according to the map were about half way along the trail.  It seemed like an opportune place to turn around.  It made us doubly glad that we hadn’t tried to to the entire trail from the far end.  We would have had no choice but to climb those cliffs.  I suppose we would have managed, but I wanted to remain alive for another day. I had to face the fact that with the bad knee and vertigo coming and going I probably would never manage Angel’s Landing in Zion in this lifetime either.

Retracing out steps just a bit led us to a charming picnic table in a ravine surrounded by wildflowers and shaded by huge trees.  There were just a few small pools of water remaining from what I could imagine were rushing waterfalls during the springtime.

People passed by on the trail and we were happy to have the table for our evening picnic of Sara’s goodies. The shade felt great and we were grateful for the water bottles we had carried on what turned out to be a rather hot afternoon on the trail.

Taking our time as the trail evolved from rough rocks to stone steps near Nocelle, we loved seeing the view from a different perspective.  We saw that the fires were still burning, and watched the big bellied planes dipping into the sea and flying over the ridges to drop water on the fires.

The few tiny establishments along the way tempted us, but we didn’t want to miss the last bus from Nocelle back to Montepertuso.  As luck would have it, the bus was on time and showed up not long after we arrived at the stop.  The pushing and shoving were a little less obnoxious by that time in the evening and we were grateful for that. We were ready to be home in our little apartment for what would be our last evening on the Amalfi Coast. Time to pack and prepare for our travels north to the city of Florence “Firenze” and a completely different world.