It has been a precious summer so far.  For the entire month of June I breathed in the blue skies and fresh air without a touch of smoke from wildfires to mar the loveliness.  Sometimes during a simple quick run to the grocery store I would be completely awed by the technicolor blues and greens that made me wonder if I hadn’t perhaps ingested some sort of mind altering substance without knowing it.

The colors were almost psychedelic, cartoonish, so brilliant that I would just breathe and drive and gasp out loud all alone in the car.  I know the fires will come eventually, the clear air will go gray and dingy when the smoke from the wildfires that are already beginning to dot the maps of the west finds our valley once again.  Then again…could we really be lucky enough to skip the smoke this year?  I haven’t lived here long enough to really know if that is a possibility.  Smoke always seems to come when everything is at its most beautiful.  Maybe not this year, I’ll wait and see.

This is our first summer actually living in Grants Pass full time.  Mo and I are enjoying having more time to fiddle around with projects.  Mo’s most recent creation was an arbor for the old front gate area, where she used two old doors that we saved from the cottage as side walls.  Thank you, Pinterest, for the ideas!  We loved the old doors in the cottage, built in 1926, and I think these doors were originals.  Mo cut and sanded and painted, figuring out the puzzle of using the old existing gate posts as standards, and making the whole thing fit in, level and even. 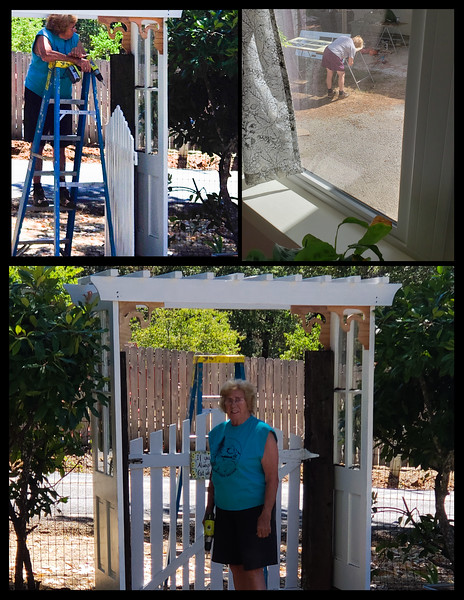 I love the arbor, and the old gate that it surrounds.  Somehow it feels like a portal to me, a portal from the outside world into a magical world of our own making.  I love the feeling of memories of the old cottage contained in those old doors.

July 4th was quiet this year.  Daughter Melody and her family had other plans.  For years she has missed sharing time with her old theater friends from the days she lived in Albany, and now that she is in Eugene, just an hour away from Albany where those friends live, she was able to attend the annual Fourth of July party with the theater group.  She told me a year ago that she would NOT be available this year for our traditional family time. 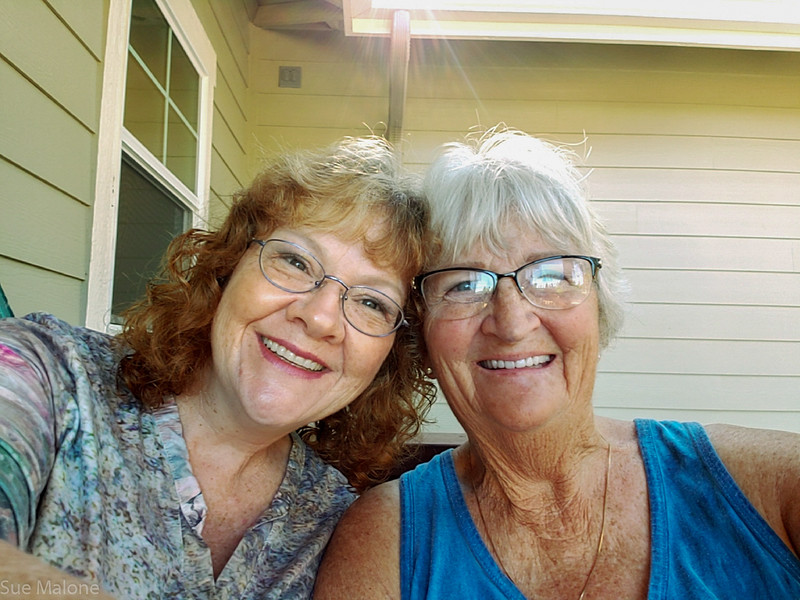 Instead she and Robert drove down from Eugene on Saturday to spend the weekend with us, and on Sunday daughter Deborah showed up for yummy brunch, family time, and the traditional game of Bocci Ball, which seems to show up every year on the 4th, no matter where we are.

On the actual 4th, Mo and I decided that we needed some sort of entertainment that was out of the ordinary house work, yard work, book work, and such, and decided to try out the trails in our nearby county and BLM park.

Cathedral Hills is a big park, with several miles of trails for mountain bikes, hiking, and horseback riding, no motorized vehicles allowed.  Still, when hiking, a mountain biker barreling down those trails can seem quite fearsome, especially when getting off the trail involves negotiating the thick stands of poison oak and corralling Mattie!

This view from the Hogback Trail is facing east toward our house, which lies on that terrace at the base of the mountain to the right of the big pine tree.

Close friends know that Mo has been having some ankle trouble lately, and it has kept our hikes short and to a minimum.  She has been seeing a physical therapist and felt good enough that she thought she could handle at least a couple of miles of walking.

We started early in the day, while it was still cool, and found our way to the main entrance to the park, farther west than the Walker trailhead that is just half a mile down the road from our house.  I hiked the Walker trail a couple of years ago, and knew it was terrifically steep with tight switchbacks to the Hogback trail on the ridge.

There were quite a few people in the parking lot when we arrived, but the multiple trails were not the least bit crowded.  In our entire 3.5 mile hike we passed just a few people, horses, and dogs.  Mo’s ankle held up well, and she was only a little bit sore the next day.  Both of us were encouraged, since for the past 16 years one of our major forms of entertainment has included hiking and walking.  We surely don’t want to give that up!

My crazy hip did fine as well, with the buckets of Aleve that the doctor said I should take, insisting that my kidneys were strong.

After our hike, we came home and relaxed a bit, did some chores, had a early supper, and decided to brave the city crowds for the fireworks show at Reinhart All Sports Park in Grants Pass.  Once a long time ago, when we first bought the property in Grants Pass, I discovered the pedestrian bridge, but hadn’t explored the park.

Official parking was less than a mile from the park grounds where the fireworks were going to be set, and the walk through the park and across the river was lovely.  Mo’s ankle did start barking, and we decided that if we do this again, we will save the big hike for another day and save our steps for the park.

The music was loud, but in the distance, the crowds were pleasant, and not too thick, the police presence was there but not intrusive.  We set up our chairs and waited, hoping we were in the right place.  Many people around us hoped for the same thing since the city fireworks show hadn’t been in this location in the past.  In fact, last year, Grants Pass didn’t even have a fireworks show.

The show itself was interesting, and quite different from any I had seen before.  Gone were the big loud booms, with the wait, and then the bursting flower of color high in the sky.  Instead, some sort of machine shot out many bursts at once, in all directions.  They were lower in the sky, but very colorful and there were a LOT of them.  We enjoyed the show, but I did miss the big ones.  There were no fireworks allowed in the park, so the scary prospect of a firecracker set off underfoot by some crazy person wasn’t a problem.

The parking was handled exceptionally well, and we were surprised at how orderly and easy it was to exit the parking area and within minutes afterward we were back home.  It wasn’t a typical July 4th celebration for us, and I did miss the family time on a lake somewhere, but it was still very nice.  My kids know I get all silly about July 4th if I don’t have family around, but this time I was perfectly fine. 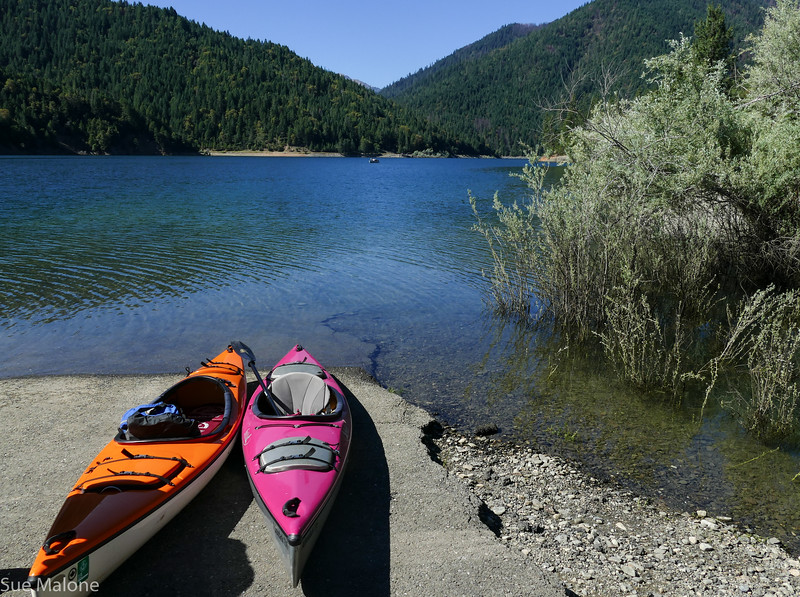 When Mo and I returned from our trip to South Beach, we left the kayaks on top the baby car, thinking that we would find a lake to kayak soon enough.  On the last Wednesday in June, we traveled south through the Applegate Valley beyond Ruch and the wineries, to Applegate Lake.  It is actually a reservoir, with only a little bit of shoreline showing and the water wasn’t terribly low as is the case in some of the other reservoirs in this area on the west side of the mountains.

I remember a couple of decades ago when Melody lived in Ruch, and saw Applegate Lake for the first time.  I still lived in Idaho, and she called me in a panic saying, “What is wrong with this lake??  It has a huge bathtub ring?!!”.  She had the luxury of being raised in the Northern Idaho Eastern Washington lake country, where every lake is real, and very few have dams that let out the water to levels that make for those ugly steep brown exposed shorelines.  Here on the west side, every lake we have found is actually a reservoir, with associated levels that are affected by the spring rains, snowmelt, and irrigation.  This year, with a drought officially claimed, those levels are going down fast.

Still, our day on the Applegate was perfect.  The skies were again that technicolor blue, with only a light breeze.  We first checked out the official campground and boat launch site, but it really didn’t have much to offer and was at the northern edge of the lake, without much to see on the shoreline.  There was also a $7.00 fee to launch and the manager of the place was rather rude.  I told him nicely we would look for another launch, and he said, “Your stuff won’t be safe there, why in the world would you want to be on that end of the lake?!”  Duh, we are kayakers, not boaters, and we want complex shoreline, little coves, and no big fast boats getting in our way!

The Copper launch was just about perfect.  Clear water, no silty mud, and nice long paved launch where we could take the car right to the water. Something I read on Wiki was fascinating.  The boat ramp is the upper part of the road that once went to the town of Copper, buried forever when the lake was filled in 1980.

Once on the lake we traveled south, and found a beautiful little cove the meandered back into the forest, shrouded with shady firs, and huge rock cliffs.  It was back here that we did see some birdlife, mostly geese, but with their little ones they were very entertaining. 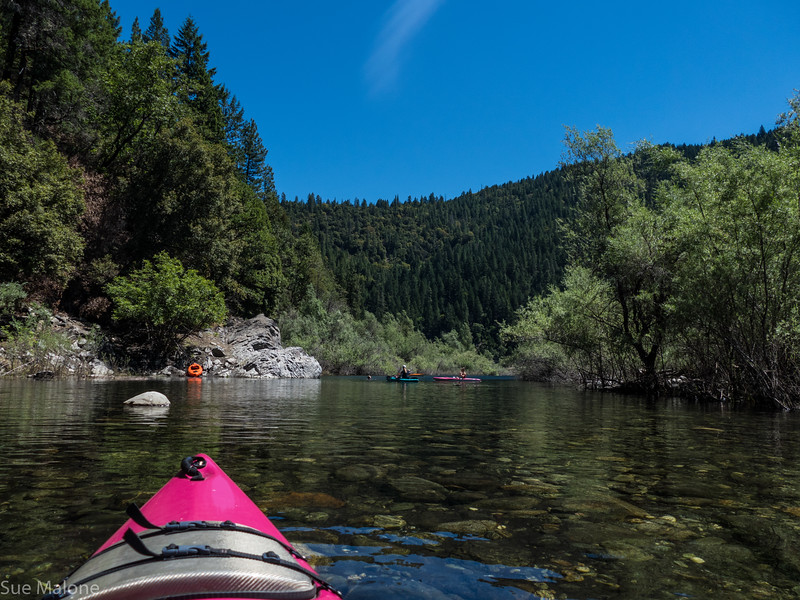 There were a few more kayakers on the water, but they weren’t intrusive, and told us about another cove farther south past a place they called “The Orchard”.  Sure enough, we continued south and found this inlet, along with a big open park that looked like a campground.  Still planning to check if it is a day use area only or includes overnight camping. 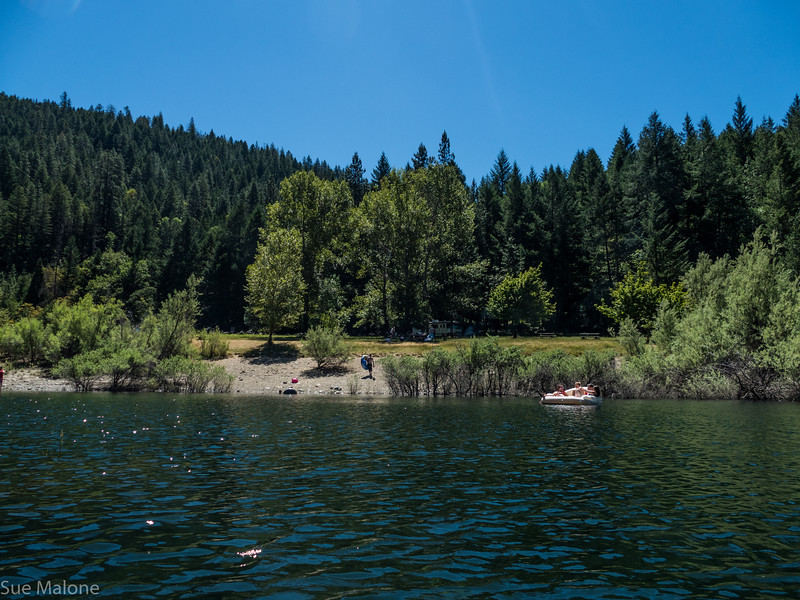 We spent about 2 1/2 hours on the water, enjoying every single moment of crystal clear skies. clear clean water, and brilliant sunshine. I am sure we will return to this lake in the future, since it is the best place so far on this side of the mountains for kayaking.  As I said before, the mighty Rogue River is a bit much for us, with a strong, fast current.  It is a big river, with lots of rapids in between the quiet places, and neither of us is particularly interested in that kind of kayaking in our long lake boats. 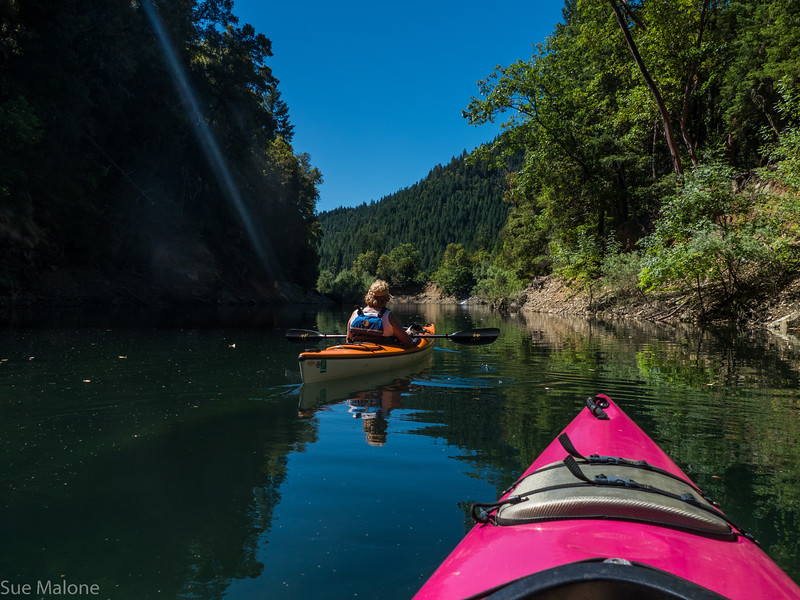 I packed a picnic for us and we shared it on a real picnic table overlooking the lake.  I have no clue what we did for the rest of the afternoon, but were back home by 2.

Being on the road and traveling in the summer can get so tiresome, with overcrowding, parks full of kids, hot weather, and no vacancies plaguing so many folks any more.  Our idea of good summer times is enjoying all the beauty of our own local world.  I think we are off to a good start.