We are home in Grants Pass after traveling once again to the Oregon Coast for a few days.  Mo’s brother Roger passed away last summer and his wife and daughters thought that it would be a good thing to have the family gather at one of his favorite places for a bittersweet good bye. 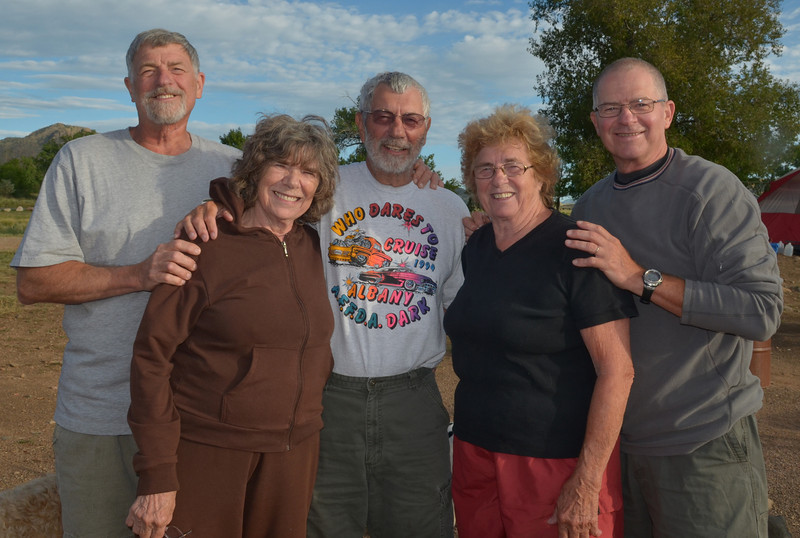 The Five Oukrop Siblings, Dan, Edna, Roger, Sharon (Mo), and Don at a family reunion in 2012

South Beach State Park is just a couple of miles south of the sweet coastal town of Newport, and boasts 227 sites with electric and water, and 27 yurts, 14 of them dog friendly.  Roger’s wife Nancy started planning the event many months ago, calling on the first day of availability to reserve several yurts and several RV sites, all within close proximity to each other.  She also arranged reservations for some of the out of town relatives without camping vehicles to stay at the nearby Holiday Inn Express.

When I counted everyone that was present in the family photo there were 41 family members there. The majority live in Oregon, but some came from Illinois, Washington State and Colorado to bid Roger a last goodbye.

The Oukrop clan is an amazing family, and as the years have passed I have seen the family reunions shift as the sons and daughters of Mo’s brothers and sister are now having sons and daughters of their own.  Mo and I are amazed at all the little kids running around that are now part of the ever expanding family.

South Beach is a great location for these kinds of gatherings, especially for a physically active and sports minded family like this one.  The park boundary begins at the southern edge of Newport along the Yaquina Bay Bridge and stretches several miles to the south.  There are walking trails and paved bike trails in addition to miles of sandy beaches. 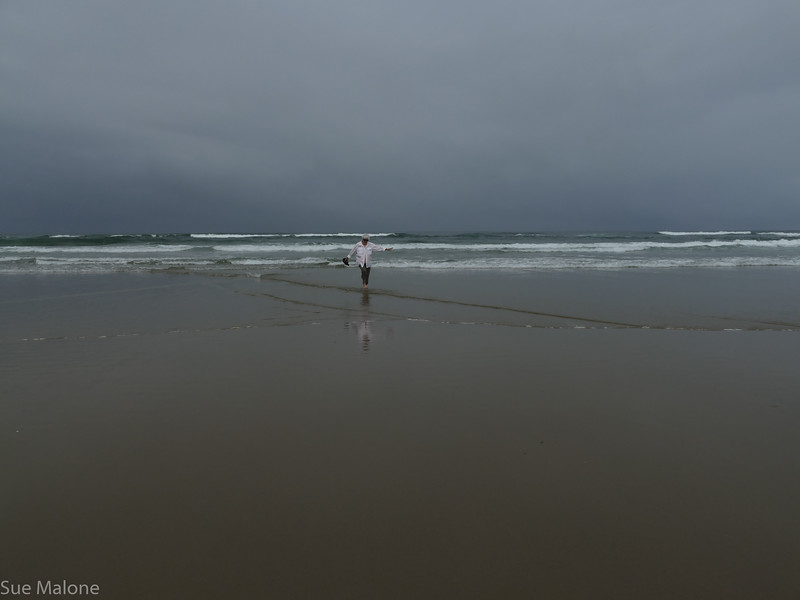 I love walking the beach here because unlike most Oregon Coast beaches which are rugged and rocky, this one is broad and flat, separated from the campground by dunes and sea grasses, much like some of the beaches in Florida.

We traveled I-5 north to Sutherlin and then turned west toward the ocean following the route of the Umpqua River.  Almost every road that crosses the coast range between the valley and the ocean is rugged and curvy, and this was no exception.  It isn’t a scary road at all, just a bit narrow, and with a few surprising curves.  The day was incredibly gorgeous, with temperatures going into the 90’s inland near home and dropping by degrees to the low 60’s as we approached the beach.

We arrived late afternoon, just about the same time as the rest of the group, and were happy to set up camp and then go to town for dinner with the rest of the RV campers.  The Chowder Bowl is a little seafood restaurant in the part of Newport called Nye Beach, and has never been a disappointment.  I ordered the special, chipotle shrimp tacos, and Mo’s sister in law Chere reminded me that I ordered the very same thing 2 years ago when we gathered with family at this same restaurant.  Of course, that time, Roger was still with us. 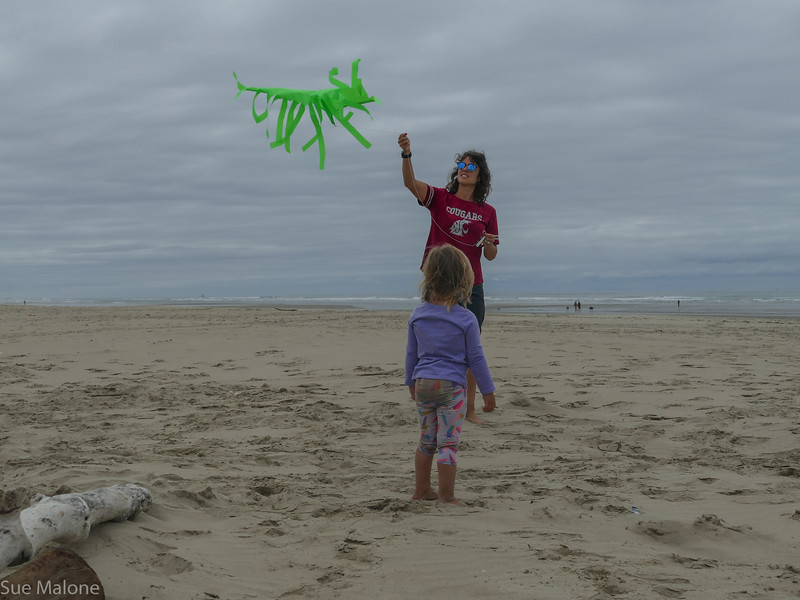 We woke the next morning to cloudy skies, but the temperatures weren’t terribly chilly, just enough for a jacket for our long morning walk on the beach.  Later in the day, some of the family gathered at the beach as well, and I had a great time trying to photograph the little kids doing all that little kid stuff. 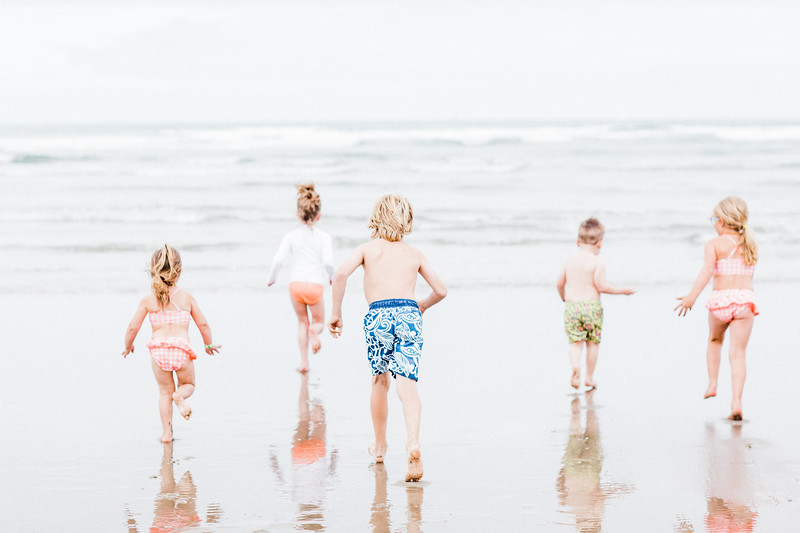 Brother Don and his son Lanson 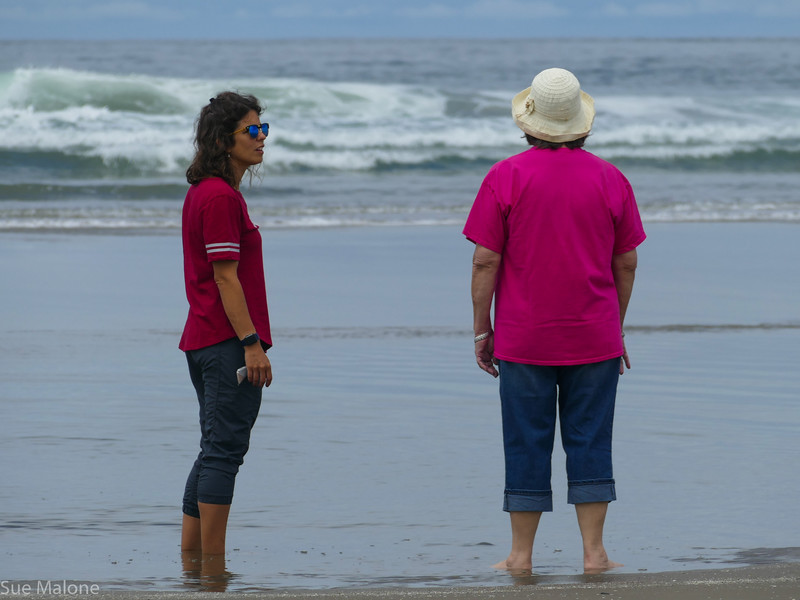 Lanson’s wife Mandy catching up with her mother-in-law Wynn. They are a very close family.

That evening there was another gathering of people around the motorhomes with shared horseshoes, good food, and campfires.

On Friday we drove south to the Beaver Creek boat launch.  Brother Don brought his sleek wooden kayak in addition to another tandem kayak and we had our two kayaks.

The two older boys, Roger’s grandson Logan, and Dan’s grandson Owen won the kayak lottery and we had a great time on the water.

We had kayaked Beaver Creek in the past, but this time it was prettier, even though the wind did come up on the return trip downriver.

Another gathering of food and family around the campfire that evening rounded out the day. Sitting around the campfire it seems that much of the entertainment involves watching the little kids.  I also love watching the mom’s doing their mom thing.  Each of Don’s offspring have 3 kids, and they are all close in age, so I get a big kick out of watching all of them without having to do a thing except watch. I was mother to 4 of my own, all very close together, and I remember how that felt.  Ahhh…so nice to be old. 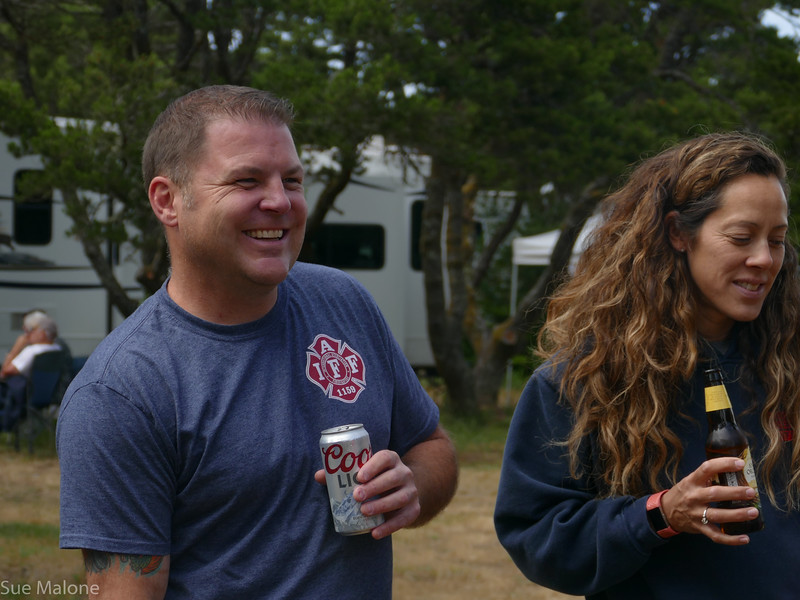 I enjoyed the chance to get to know some of the family members I hadn’t met before, including Dan and Chere’s son Zach and his wife Amy, with their two boys, and their daughter Rachel and husband Mike and their two kids.

Saturday morning finally brought a gorgeous sunrise with the promise of a lovely sunny day ahead, perfect for the main event for this family gathering.

Dan and I rose at 5:30 every morning to take the dogs for a walk on the quiet deserted beach

In addition to arranging all the camping and hotel facilities, Nancy also set up a lovely memorial celebration held at the beautiful Oregon Coast Aquarium in town.  It was a lovely venue, with the event room located at the edge of the bay in a beautiful garden with the big shark tank decorating one of the walls of the room.

We had an hour to socialize, then an hour to eat some truly good food, and then an hour to share thoughts of Roger with those who loved him and knew him.  As Mo and I were getting ready, we were concerned that 3 hours seemed like a really long time for such a gathering, but it wasn’t at all, it was just perfect. 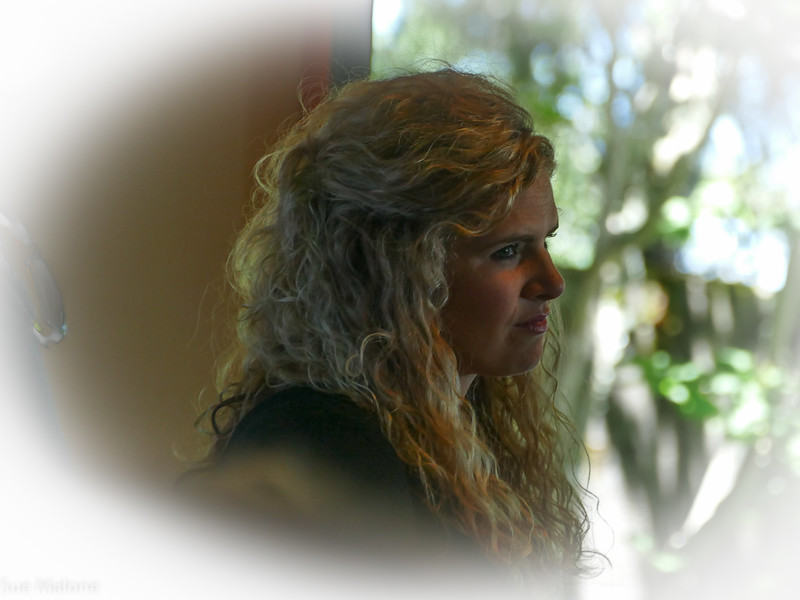 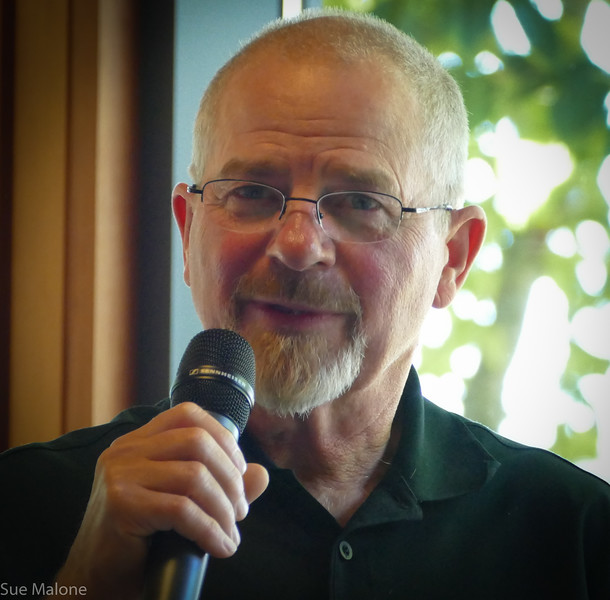 Don gave a moving tribute to his elder brother

When the memorial was over, everyone drifted out into the aquarium grounds to enjoy the exhibits.  It was a wonderful way to let some of the sadness of the memorial dissipate as we walked around in the sun and watched the animals.

On our final evening at the beach, Nancy and her daughters planned to spread the rest of Roger’s ashes in this place he loved. 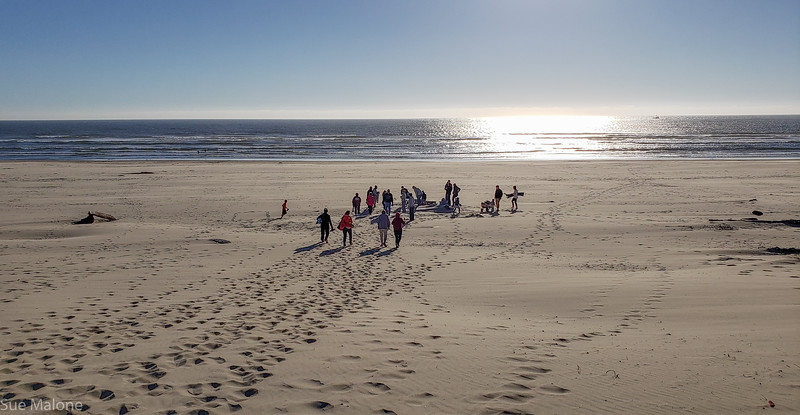 We gathered up big bundles of firewood, (no beach driftwood), and with chairs and jackets headed for the beach.

Some were a bit worried about whether we could actually get a campfire started with the wind blowing so strongly, but a cardboard box full of kindling and fatwood did the trick just fine.  The fire burned like it was fueled by a blowtorch.

Once the fire was going, Nancy and her daughters, Randi, Juli, and Angi, walked down to the water together with Roger’s ashes.  As cold as it was, they walked out into the surf and let the ashes return to the ocean that Roger loved so very much. 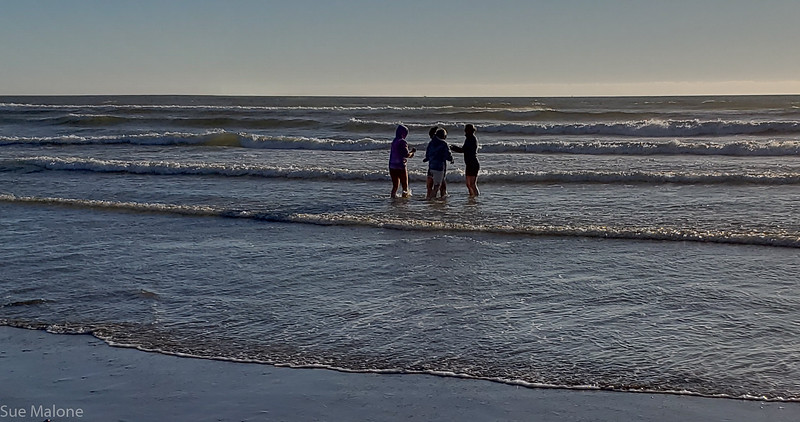 We returned to the bonfire, and just a few minutes later we looked out to sea and there they were.  Whales!  We saw the first spout and then more and more as several whales were traveling just beyond the surf. If there was one thing Roger loved, it was playing in the water.  The whales never breached, but I think they were calling Roger to come and play with them. 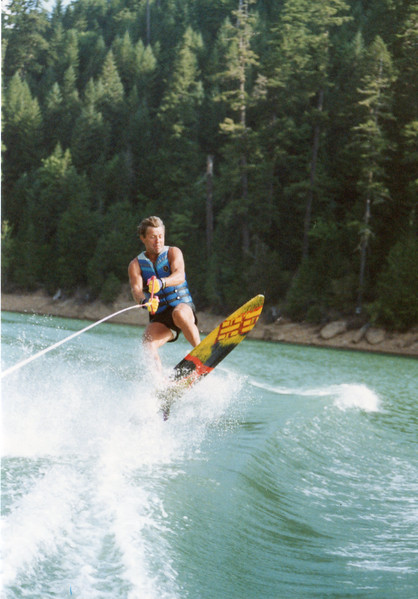