Remember that if you click on a photo, (except for maps and internet photos) it will take you to the larger version on my SmugMug site, where you can also see more photos in that gallery.

When Sunday morning arrived, the gorgeous clear skies over Tucson were showing a bit of gray.  Clouds were coming in.  We didn’t know at the time that there was a lot of rain heading towards the big city in the desert, and as the days passed with extended weather reports from friends and news sites, we knew how lucky we had been.  Our entire time so far had been gorgeous.  Sunny, warm, temperatures much above normal, no wind.  Who could ask for more?! 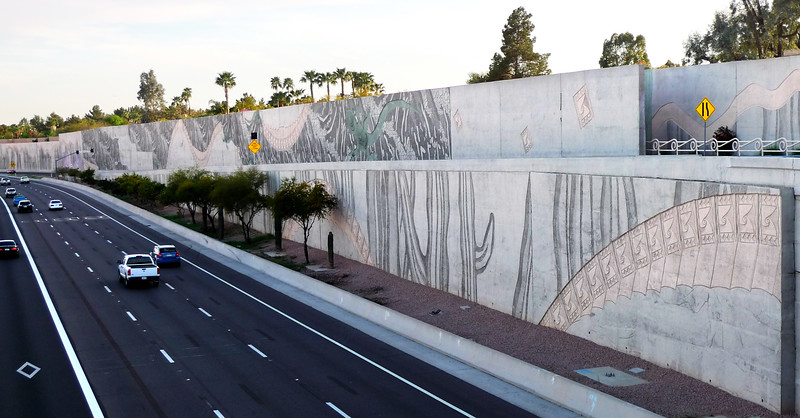 Leaving Tucson, we knew the best way out of town was on the interstate.  To our delight, I-10 at 9 on a Sunday morning was beautifully quiet.  Note to self, always leave big cities which require freeway travel on Sunday morning.  I was driving so we missed photographs of all the amazing freeway overpasses and bridges between Tucson and Phoenix.  Even the fences are covered with gorgeous sculptures, some in cement, some in rusted metal.  We enjoyed all the art along the highways, both in Arizona and in Nevada.  Next time I’ll have Mo drive this section so I can get some photos.

(The two photos here were taken from the internet just so you get the idea.)

I have noticed this trend growing in many places where we travel.  Made me wonder what it must be like to be a freeway graphic artist and to see your designs bigger than life in such a public venue.  Almost as much fun as the mural craze that seems to be everywhere as well.

We were still not absolutely sure about our route home.  I had checked the weather going north along Highway 395 in California, and it looked a bit iffy.  The fastest route would be to take Highway 95 directly north from Las Vegas to Reno, but geez that part can be boring.  We thought maybe we could boondock in the Alabama Hills if we could get through Death Valley.  Both of us remembered some of the climbs in and out of the valley.

The route we traveled from Tucson to Minden, Nevada

We decided to head for Phoenix, and then north, with no real idea of how far we could or wanted to go and where we might end up that night.  Beatty, Nevada was the goal, and then Stovepipe Wells in Death Valley, but who knew the timing.

I used the freecampsites.net website and found quite a few boondock sites north of Kingman.  I couldn’t believe how big Kingman was, and as we passed through, the boondock sites didn’t look all that welcoming.  We continued north, thinking we could find something.  Once again, freecampsites.net led the way.  We saw a big parking lot available across the street from the Hoover Dam Casino, just east of Boulder City and set a beeline for a free night spot that shouldn’t be terribly crowded.

Turned out to be a perfect place, and we never even bothered to cross the highway to visit the casino.  Dinner was once again some excellent leftovers from the freezer while we watched the sunset and settled in for the evening. A few rigs rolled in during the night, but they weren’t terribly loud.  By morning there were a few trailers, and some car and tent campers scattered around the edges of the big space.

Our plan was to continue north and then cross Death Valley, with a stay at Stovepipe Wells, but the weather had other plans.  It was COLD, and when we drove into Beatty I think the daytime temperatures were in the low 40’s, with a hard freeze predicted for the night.  I called Stovepipe Wells, where we were told all sites were taken, and we did a quick rethink.  We had passed a decent looking park on the way into Beatty, so gave them a quick call, and sure enough there was a space, full hookups.  Death Valley Inn RV Park was a good choice.

It was still early in the day, and as we thought about our options, it seemed like a good thing to relax early and spend some time playing and exploring.  We have been to Death Valley a few times, and the things we would see there are sights we have enjoyed in the past.  Something different would be fun. 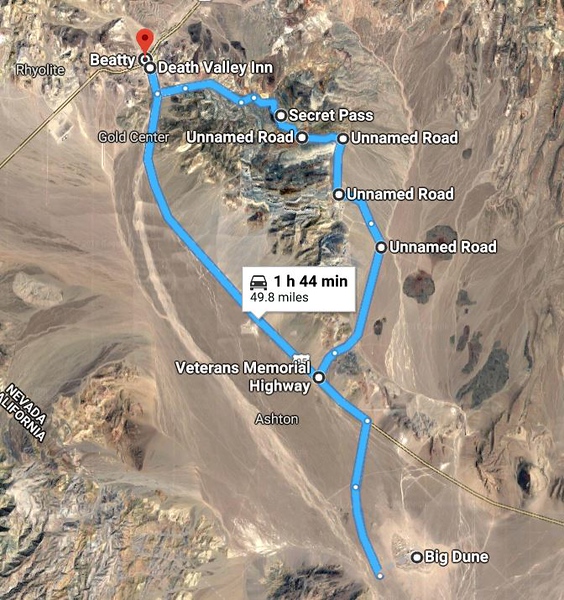 We headed for the tiny Visitor center in town, next to the cheapest gas in town, and gathered up some brochures on local interesting things to see and do.  Rhyolite is a ghost town that is fun to explore, but we had already done that a few years ago.  We decided to explore some of the back 4 wheel drive roads, and found an interesting loop that meandered past old mining cabins, through “Secret Pass”, south to the desert, and back via the highway. 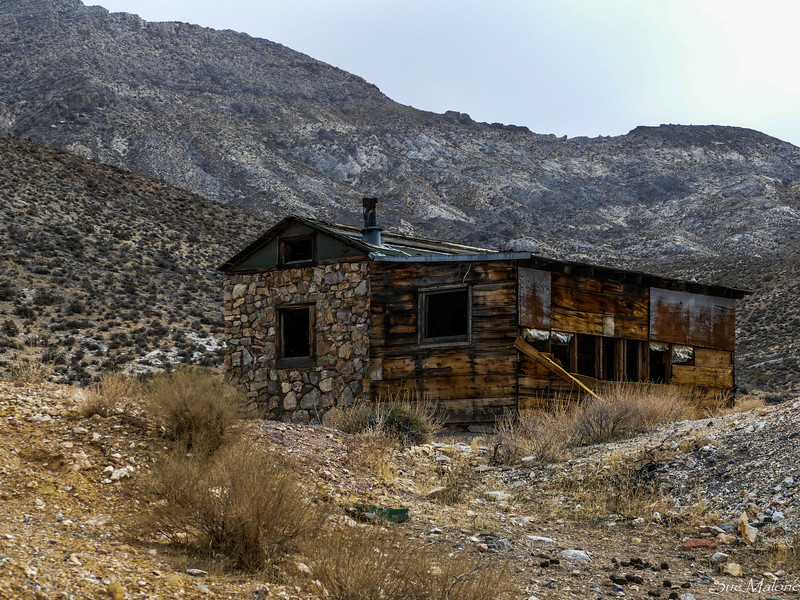 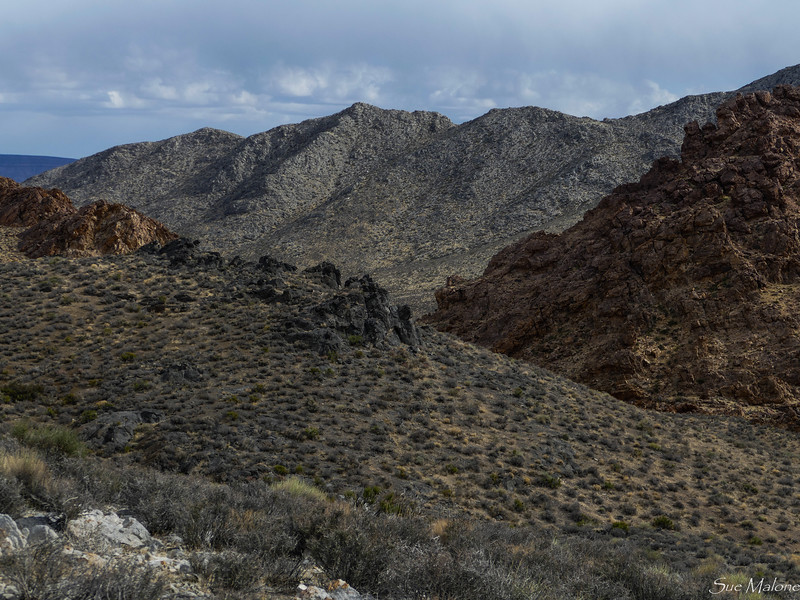 The 8 miles to Secret Pass was challenging, but that is why we were out there.  I was a bit of a wreck actually, as Mo crawled over the big, pointy rocks, with me jumping out now and then to move some especially big ones.  Once we were past the bad part, it didn’t seem so bad.  I think for me it was the unknown factor of whether the road actually continued through.  I didn’t like the idea of having to back up and out over those rocks and ditches and eroded dry streambeds.

When we got to an easier part, I started taking photos, and Mo asked why in the world we didn’t get photos of the scary parts?  I was too busy holding on and gasping! 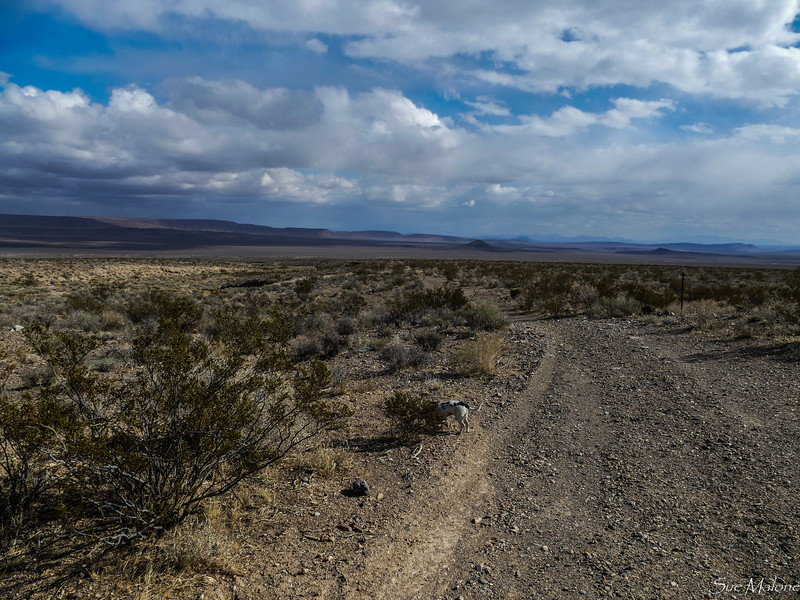 Of course, we didn’t have a good local map, and the phone map quit working about half way through.  We just kept going, and following our noses, found our way out of the mountains and across the desert back to the highway.  It was fun, and something we love to do when in the desert.  No flat tires, no getting stuck in sand or creekbeds, and beautiful views. 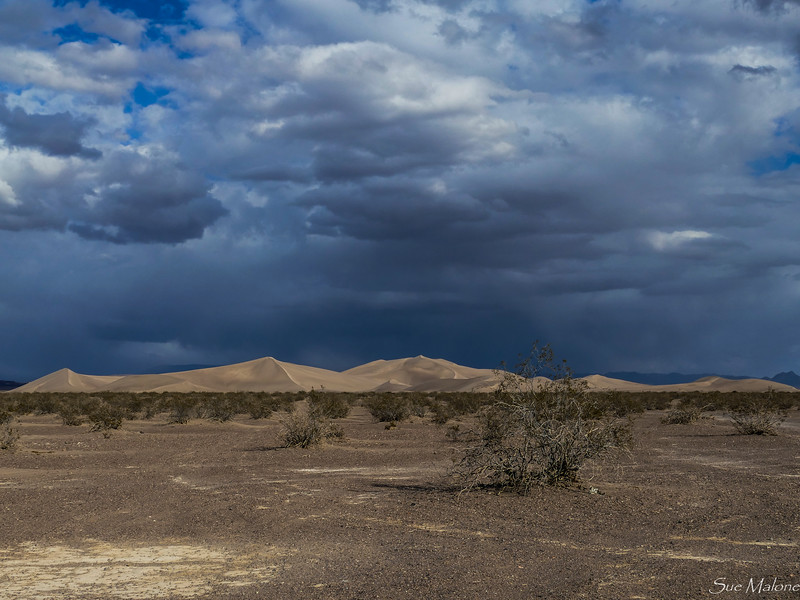 We had seen Big Dune on the way north to Beatty, and our dirt road intercepted the highway just a few miles north of the road to the sands.  We traveled the washboard gravel just 6 miles with the dunes looming in the distance.  This dune is incredible, a star dune out in the middle of the flat desert, and I loved it much more than the dunes in Death Valley.  Maybe because it rises all alone from the surrounding space, or maybe because it isn’t overrun with people, or at least it wasn’t when we were there.  Unprotected the way the Death Valley dunes are protected, it was covered with 4 wheeler tracks, but when we were there on this mid week afternoon, there wasn’t a soul around. 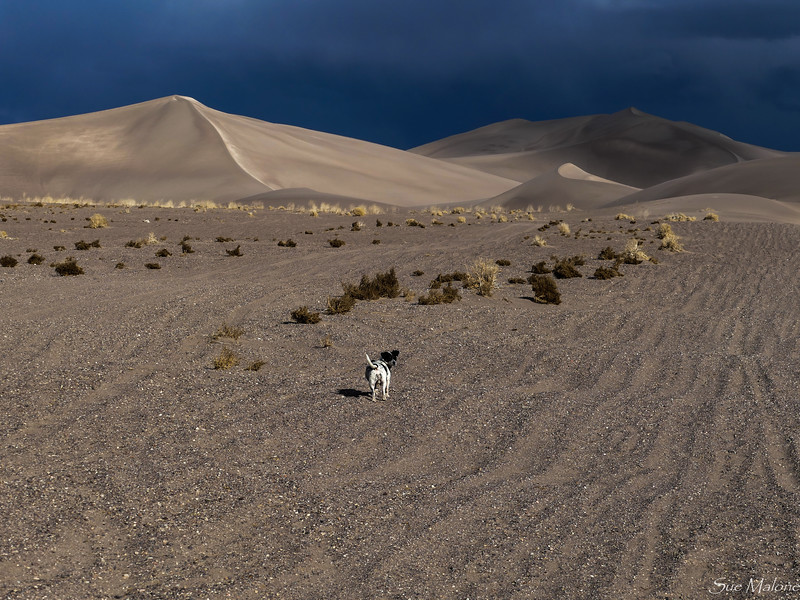 Mattie had more fun than she has had in a long time.  Something about soft sand makes her completely joyously crazy, and she ran around like a wild thing in the wind. 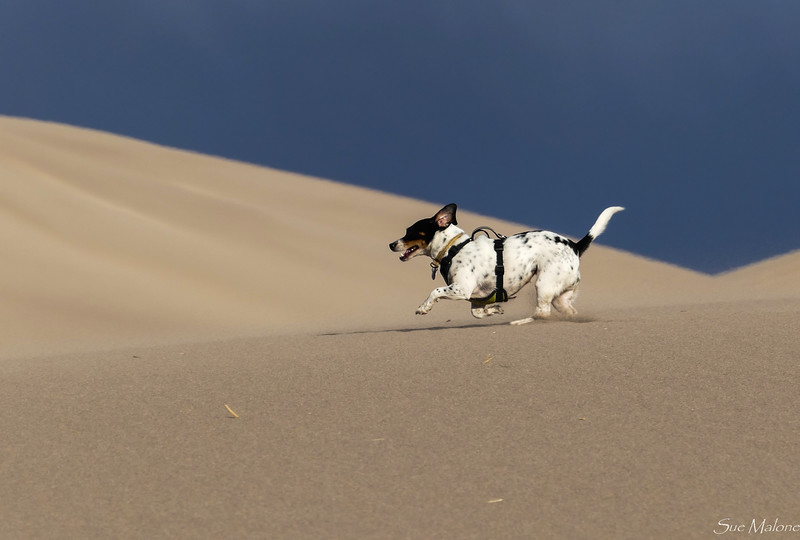 She does the same thing at ocean beaches, and in big soft grass as well.  The dune was lit from the west with the late afternoon sun and the backdrop of dark clouds was a photographer’s dream.  Gorgeous!

On our way back, along Highway 95, we finally spotted the wild burros that were touted in the brochure.  All along our route we had seen burro apples, but no burros, so we were glad to finally see them.

A great mural in Beatty along the main road into town 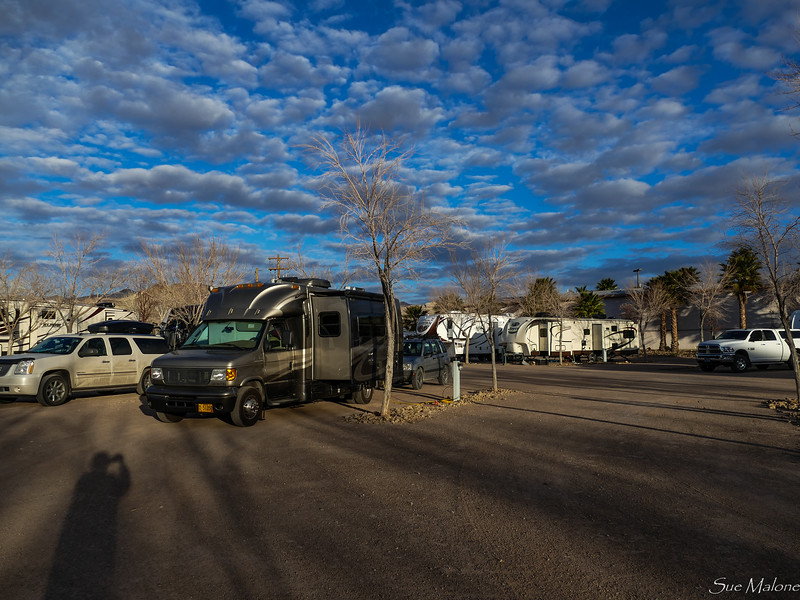 The next morning was cold, so we took our time heading west toward Death Valley.  Stovepipe Wells was busy with tourists, and I stopped in at the Visitor Center and General Store hoping for a really good sweatshirt to add to the one I found at Chaco Canyon 4 years ago.  No luck.  I am pretty specific in what I want, and I guess my current version will have to suffice.

I was glad we didn’t stay there, with all the people, visiting all the beautiful sights we have seen before.  It was enough to pass through this part of the valley and to save wandering around in the back country for another trip.

We knew about the long grade up from Stovepipe Wells, and then back down to Panamint Springs, not horrible, but definitely long.  We decided to unhook early on rather than waiting for the really big hill west of Panamint Springs.  Mo went ahead in the MoHo and I followed in the Tracker, making it much easier to stop along the way for photos. 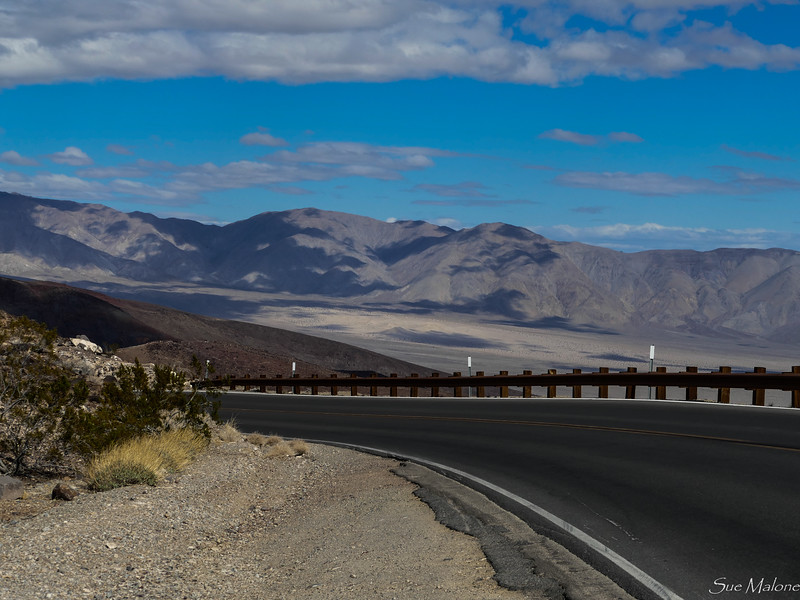 We negotiated the really steep hill up from Death Valley toward Lone Pine without any mishaps, and stopped at the top for lunch and a walk with the dog.  The sun was warm coming through the windows, but the wind was really cold!

As we approached the intersection with Highway 395, I was again enthralled with the magnificent view of the eastern face of the Sierra Nevada Mountains.  Often at this time of year, the highways are snow covered, but this year the snowpack in the Sierra’s is extremely low.  It was our window in time to travel one of our favorite highways without being worried about the storms and snows.  We have been in serious snow storms with chains required on this road as late as Memorial Day!

We didn’t stop along the way, passing places we have visited in the past, reminiscing about good food, beautiful hikes, historic sites.  Many good memories along this route for us, and it was fine that on this trip we simply passed through viewing the incredible scenery.  We were heading home, and no matter how long we are out, when it gets close to home time, we tend to move along fairly quickly.

There is just so much to see and do along this highway, the list is huge.  It deserves a month, preferably in warmer weather, not just a day.  We will return.

Our destination for the night was Minden, Nevada, where we had stayed at a new park back in 2014 on our way home from Florida.  At that time, it snowed on us, April 1, and we were happy for hookups.  This time the prediction was for temperatures in the teens, and once again we were happy for hookups.  I called ahead, and was glad I did since Silver City Resort seems to have developed into a very popular place in the last 4 years.  Most of the people there are in for long term visits.  That surprised me because it can be cold in this area south of Reno.

When we woke up the next morning, the temperature was 12 degrees F, the Tracker was covered in thick frost, and even the MoHo had frost on the lower sides.  We had turned on our tank heaters for the first time in a long time.

It was time to figure out our home route, and we cooked a nice breakfast while debating whether to take our chances over the northern mountains or give up and cross the Sierra’s over Donner Pass and travel home via I-5.  Decisions, decisions!