Most years when we travel south, we slip into one of our favorite little spots, Catalina Spa and RV Resort.  Last year was a bit of a shock for us, since one of our favorite things about this particular park  was the hot spring fed swimming pool that was open all night.  I have watched moon rises and sun rises from this pool, watched stars at night and one time tracked the space station as it crossed the sky.  I love swimming in the dark without the sun in my eyes. 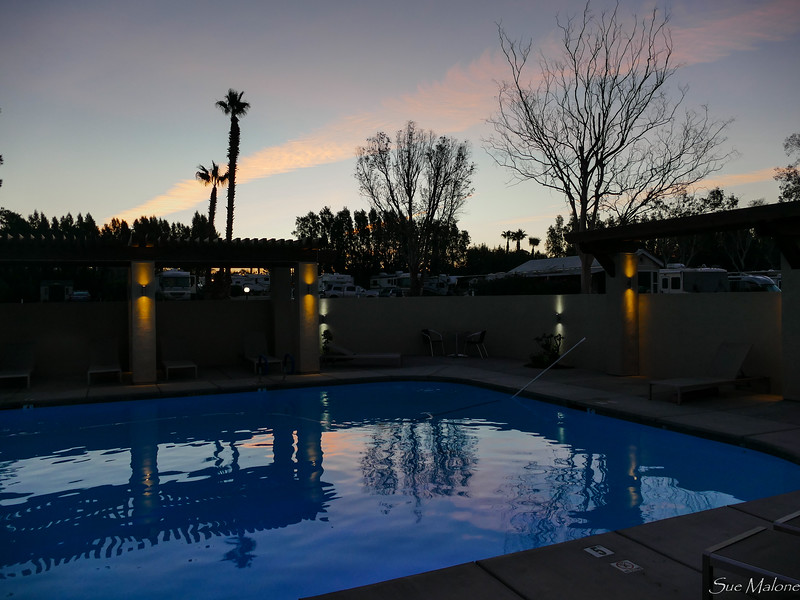 Last year the “adult” pool in the lower (older) part of the park was closed for renovation, and I had to either walk or drive in the middle of the cold night to get the the upper pool.  We knew that the lower pool renovations were complete and were excited and a bit nervous about the changes.

I discovered that I really am resistant to change.  It infuriates me.  Cracked me up when I realized how I was reacting to the shifts, just like an old person who can’t deal with change.  As time passed, I reminded myself, “change or die”, and I began to adjust to the shifts in our favorite place to camp in the Coachella Valley. 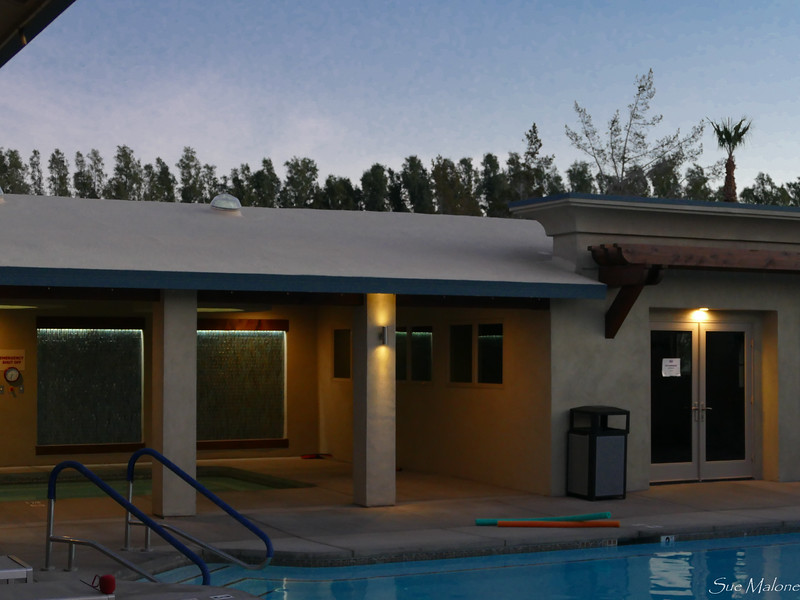 The new pool is quite modern looking.  The lovely old and somewhat amateur murals on the spa wall have been replaced with very spendy and lovely glass tiles.  The pool is spotlessly clean, with some kind of machine that runs during the night.  A very nice technician explained to me that California state law requires that all pools be treated with chlorine, and that not using it could result in the complete shutdown of the pool.  Sigh.  What I loved about that pool, in addition to the 24 hour open thing was the fact that it had no chlorine in it, and neither did the spa.  The hot springs at the resort completely replace the water in the pool every 3 days or so and in the spa more than twice a day.  Technician man said that even when he keeps the chlorine level up to state requirements, it is on the very low level of those requirements.  I only noticed it very faintly early in the morning, at 7am, when the pool now opens.  We also were told that the resort is now being billed as a “family resort destination”.  No such thing as an adult pool any more.  At least they still honor Passport America and our daily rate was a cool $22.50.  Not bad overall. Change or die. 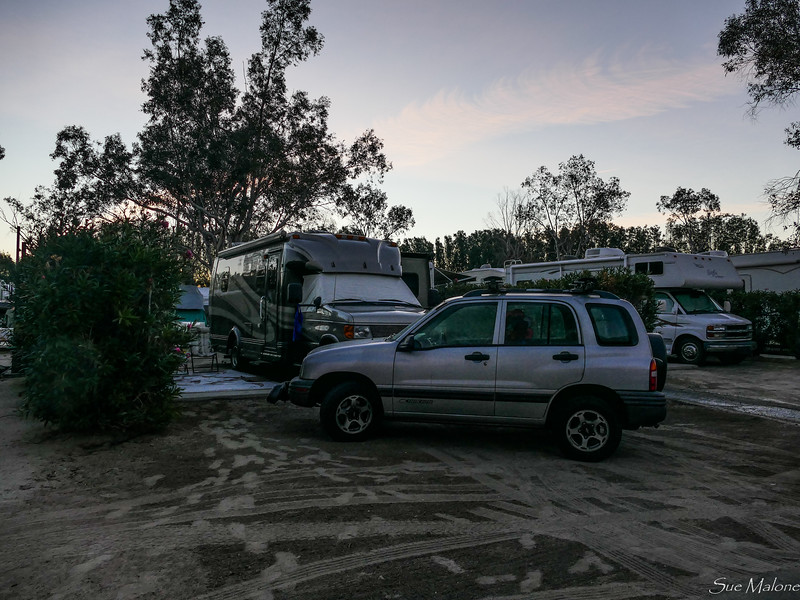 The camping area has changed as well.  Half of the lower park (including the area we always chose to camp) has been closed off for repairs, and for eventual conversion to park models only. We were directed to our spot by a volunteer in a golf cart, unlike in the past where we were allowed to make our own choice.  It wasn’t a bad spot, actually quite level, and the sand had been freshly raked.  Instead of the tall tamarisk trees at the rear of our rig on 11th street as we always chose, we had campers directly behind us, and our patio was completely visible to them.  Not exactly private, but tolerable, since we were lucky enough to have nice, quiet campers in those spots.

The park seemed fairly full, but with half of it shut down, that would explain why.  We were given pages and pages of rules and activities, how to create a “safe bag” for exiting in an emergency and all sorts of other stuff.  TV thank goodness is still not digital, so we were able to get it via cable.  (We left our cable at home somehow and had to buy another one)  So much for knowing where everything is located after our move. 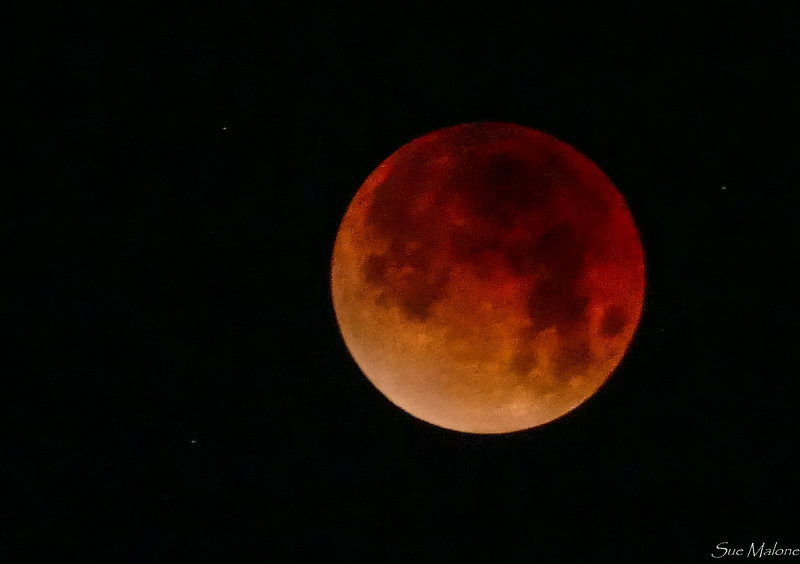 We were so lucky for our entire time in Desert Hot Springs with absolutely perfect weather.  It was especially lucky to be in a place with clear skies for the early morning spectacular show on January 31, the Supermoon and the Lunar Eclipse.  I didn’t even set an alarm, but woke up several times during the night to gaze at the moon, and was awake just after the eclipse started.  Didn’t pack a tripod on this trip, and thought that I really didn’t need to try that hard for a perfect photo.  So many good friends are really good at what they do, and they all have tripods.  I did want to at least try to capture the moment for my own memories, and the photos I got made me happy enough.  I was surprised at how many people around us in the park just slept through the entire display.  Of course, there were a few folks wandering about in bathrobes and slippers, smiling and laughing with me.

Once the sun was fully up the last morning of January, it was time to take Mattie walking in the big desert area just north.  The dog park is small and was muddy from the morning sprinklers, and the desert was much more inviting.  Within a few days, Mattie had made friends with several other dogs whose owners liked walking in the open, and several of us let the kids play off leash when everyone got along well.  As usual, Mattie likes the big dogs best, but there were a few little ones who were playful enough for her.  She can be a bit of a brat when she is on-leash, and gets all excited when she sees new dogs, wanting to play.  Her version of play can look kind of aggressive if you don’t know her, and I spent a lot of time saying, “No!!” 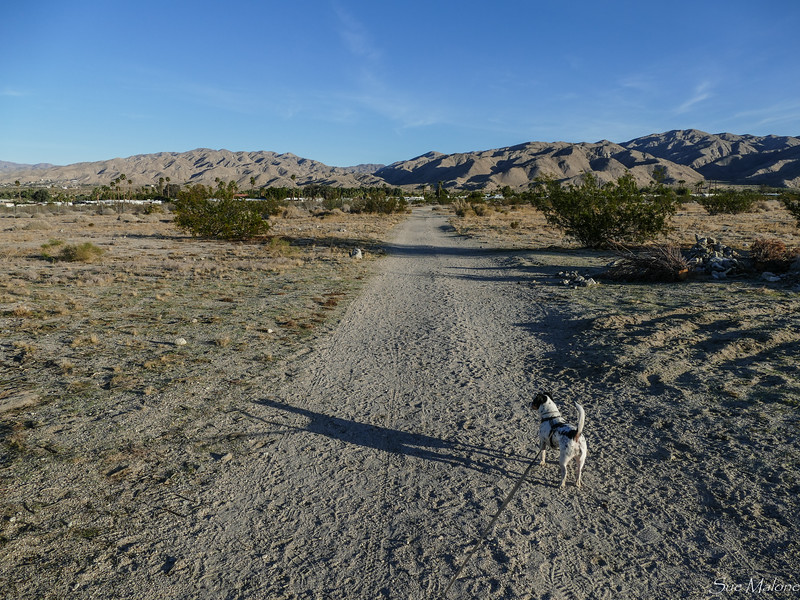 I was glad for doggie play time for her since she will be going to visit a doggie care center while we are in Mexico next month, and the place requires her to be well behaved with other dogs.  Of course.  At least she had some practice during out three weeks out on this trip. 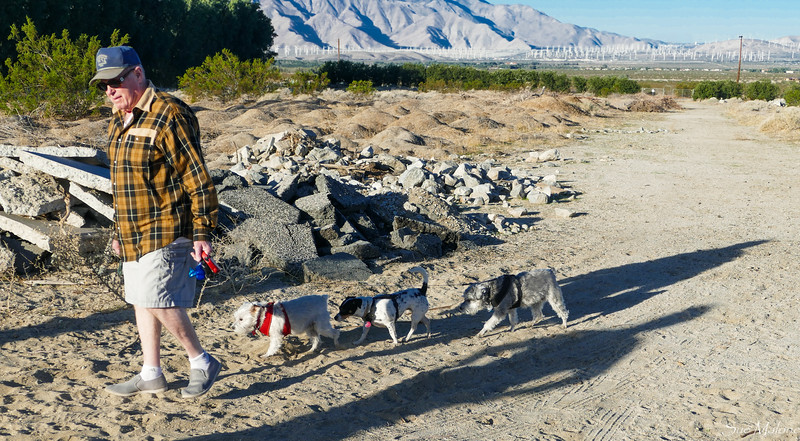 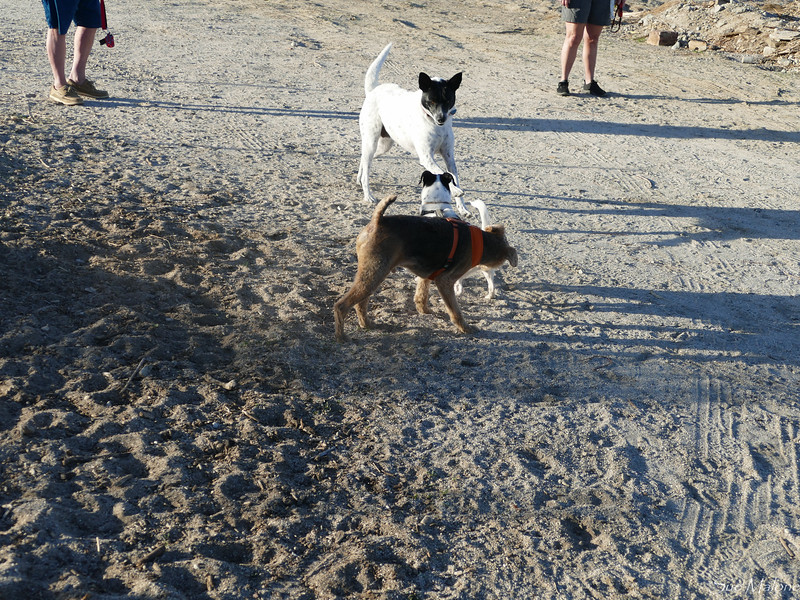 Time passed slowly for us at Catalina.  This year the weather was so great, with NO wind, an unheard of thing when visiting Desert Hot Springs at this time of year.  We had time to read in our chairs on the shady side of the rig, to swim mornings and evenings, to actually relax.  That is something we both really needed to do since we have been so much on the go for the last two years.  Real relaxation has been missing, and especially relaxation in warm sunshine!  Wonderful. 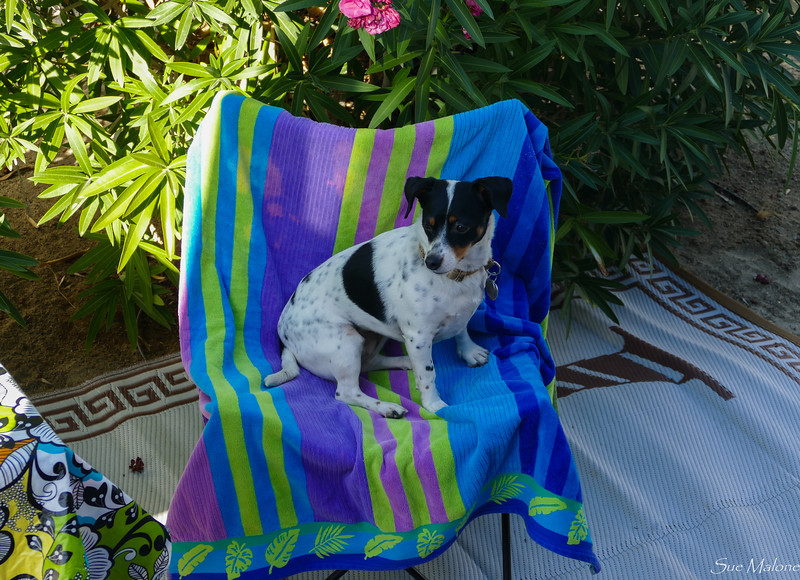 We had a few plans upcoming for the later part of our week, including some hikes, and some traditional treats like the Living Desert and Palm Springs Street Fair, but the quiet down time we enjoyed those first few days was extra special.