Mattie is completely unconcerned about thunder and lightning in Grants Pass.  Alert, but totally relaxed.

As I wrote last time, we knew that July had much in store for us.  Almost every single day was full, with tight schedules that made us often ask, “What are we doing next?  Where are we heading next?  Which house will be in on x date?”  Every minute was truly wonderful, and if we breathed a sigh of relief at the end of the month, it was only to catch some air and some down time.

Checking out the house at dusk with interior construction lighting on

I decided to write about each visit and adventure individually, to give each one the full credit it deserves, but wanted to get all the house update stuff done first, to clear my mind of that ongoing process so that I can relax and enjoy the great memories we made last month. 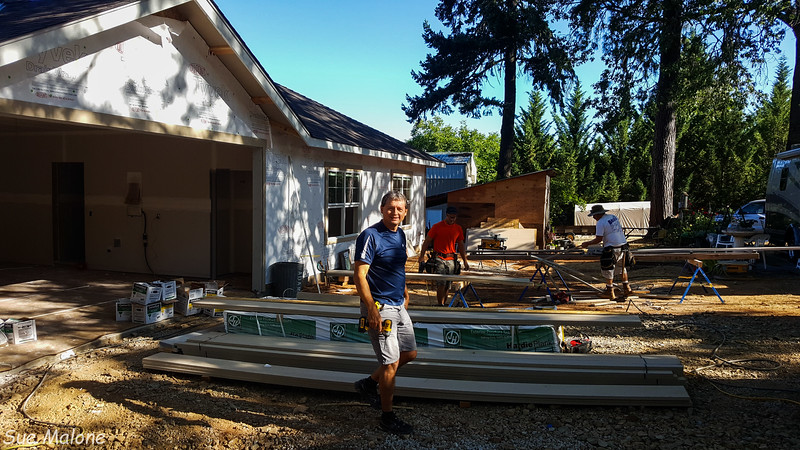 July 17 It was exciting to return to Grants Pass after a week away, partially because we knew Jimmy and Nickie were coming, but also because we knew that the A Team was returning to begin putting up the siding.

The interior was a surprise as well, with all the drywall completed, and the tray ceiling at last actually recognizable.

Gary spent quite a bit of time with us working out the details for our trim choices for the windows and doors, and deciding on what kind of crown molding would look best in the tray ceiling.

It was wonderful walking around in the house and seeing it with defined spaces, feeling the rooms more clearly, and enjoying the lightness.  With just the framing up, it was darker than I had imagined it would be with all the windows, but once the drywall was on, it changed everything.  Light!  It is so wonderfully light! 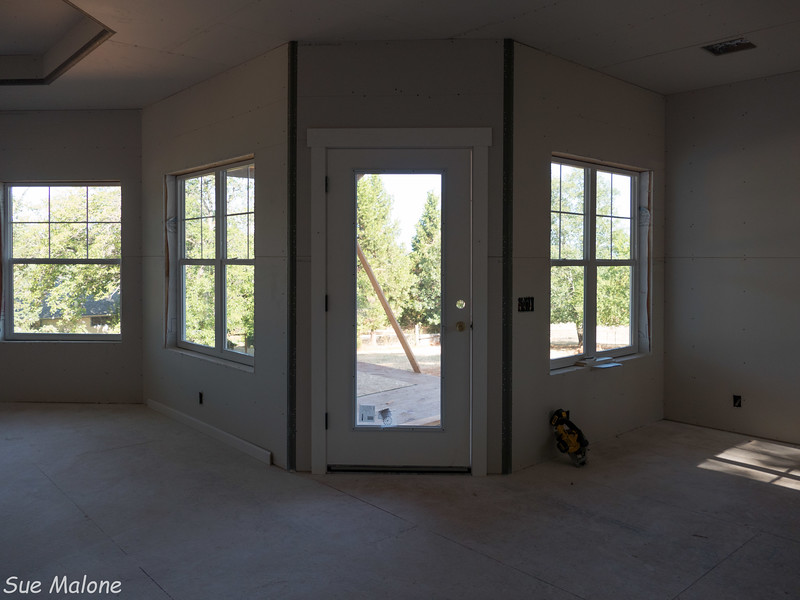 We spent a couple of days with Jimmy and Nicky, (I will be writing this post shortly) and returned to Grants Pass on Thursday to find that the A-Team really was there, and the siding was going on.  Exciting to watch that happen.  While they were working, the drywall contractor was completing the taping of the interior drywall.

I didn’t manage to get a photo of that guy walking around on his bucket.  I remember drywall tapers using stilts, but this guy just jumped up on his bucket and managed to rock and roll it around to do the 9 foot ceilings and high places.  That was rather amazing to watch.

By the end of the week, we were beginning to get a better picture of how the house will look when it is finished, with the siding and framing in place.  Gary also brought some samples of baseboard styles and we weren’t thrilled with the standard OG 3.5 inch stuff that is in modern houses.  We instead decided on a 5 inch flat topped baseboard that is more in keeping with the Craftsman feel of the house. 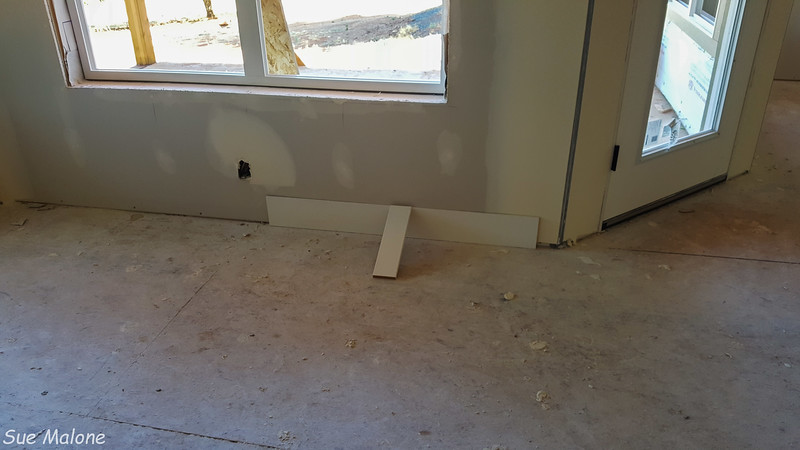 Made me really happy, reminding me of the house on Painter Street that was built in 1942 and had that same kind of baseboard. 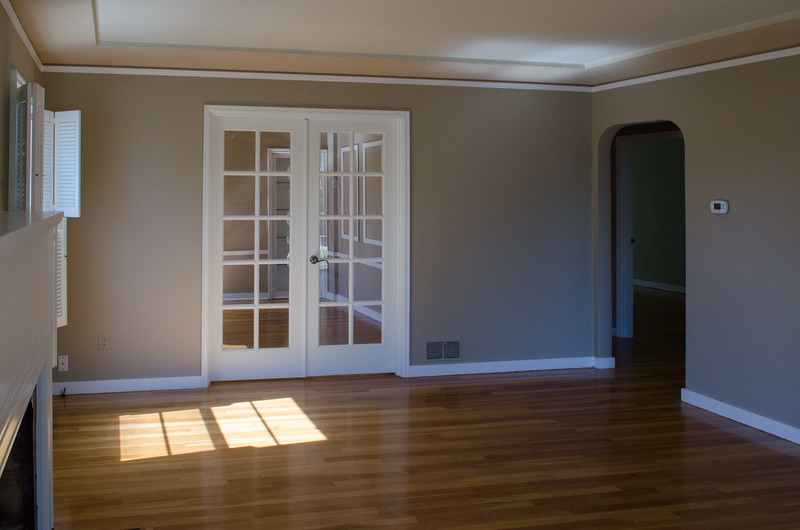 Just for fun, here is an old photo from the Painter Street house baseboard and trim

We also made decisions on doors, deciding that a “minimal” upgrade to the Shaker doors that we originally wanted but weren’t included in the original bid was worth it. So far, our only actual change orders have been for the doors and for the upgraded baseboards. 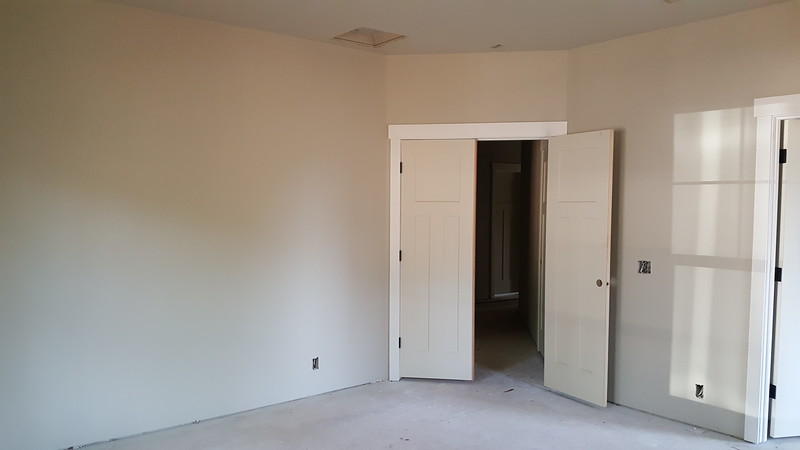 July 26 After a week at the Running Y, where we enjoyed a visit from Jeanne (I will write this post very soon), we returned to Grants Pass again to find exciting new changes.  The siding and trim were almost completed and ready for paint. 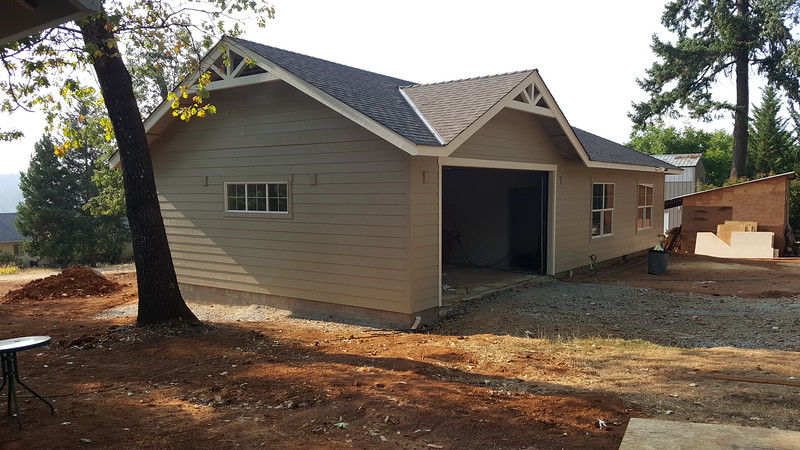 Gary did a fabulous job designing the gable treatments, and something we hadn’t even thought of were the custom attic vents.  Later that day, driving around town checking out new houses, we saw several examples of store bought vents, squares, rectangles, circles, and octagons. 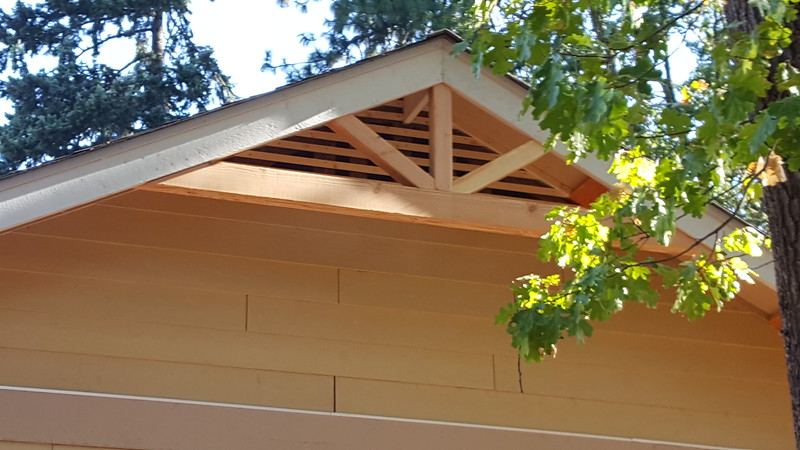 The custom vents under the gable treatments are a great touch, another reason we so appreciate our builders.

Gary also had a mock-up ready for us for the porch columns, and brought the box of our chosen rock facing that will cover the pillars to see how it would look with the planned column treatments.  We talked about different ways to trim the front porch upper cross beams, which will be stained rather than painted. 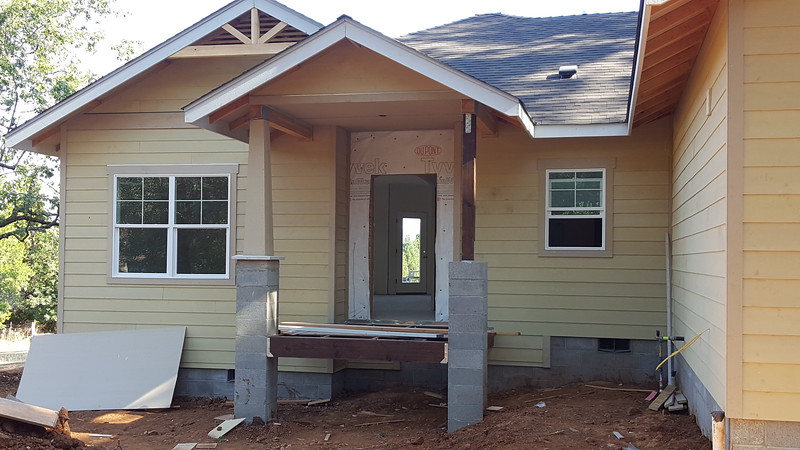 We drew out the proposed cement walkway that will meander from the garage and driveway around toward the front porch entrance, painting the dirt with blue paint and talking about how much Gary planned to raise the ground level with solid fill so that we will have only 3 steps and 4 risers at the main entry.

Mo and I will use the garage entrance most, and there is no step there except for a small lip from garage to laundry room,  perfect for us.  No steps, and all one level!

We had a great time with Maryruth and Gerald (another story to get posted soon) and returned once again to the Running Y on the last day of the month.  We were definitely ready for that few days of down time, especially since the temperatures in Grants Pass during that week reached 114 degrees.  Klamath Falls was in the triple digits as well, highly unusual for the Klamath Basin, but we stayed cool and comfortable in the air conditioned villa, and I took daily morning walks on the pathway before it was too hot.  I would check pavement in the evening, and if I couldn’t walk barefoot on it, I wouldn’t take Mattie, so mornings were the only time we could get out.

August 7 Every time we return to the house build, it gets more exciting.  It was actually a little bit scary, because we knew that the interior and exterior painting was going on in earnest.  We spent a long time deciding on colors, and knew we had to live with our decisions.  No going back once all that paint is on!.  I was really nervous driving up the road, praying that it was OK. 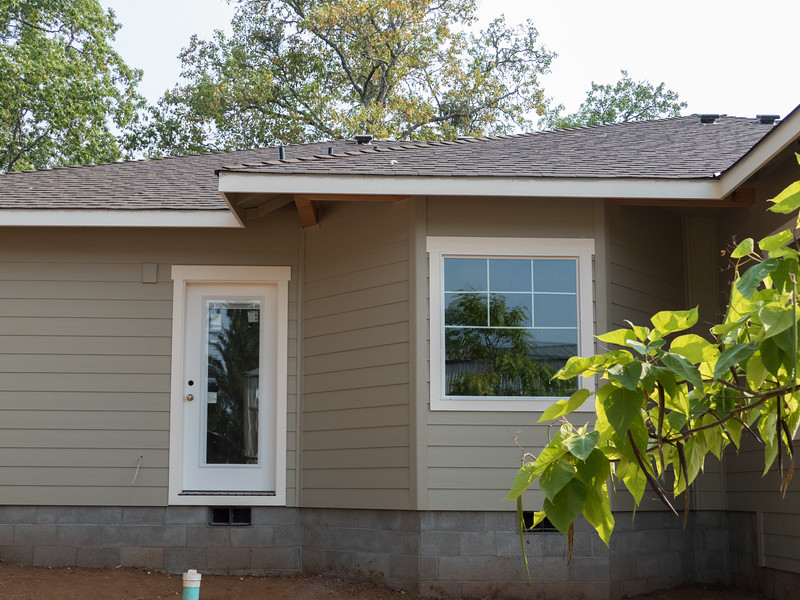 Surprise.  We loved it.  Or maybe not such a surprise because we spent a lot of time trying to match the color of the RV shed and choosing the interior paint with much reading and sample approval.

Funniest moment was standing in front of the house and seeing that the east wall of the house wasn’t anything at all like the south wall of the adjacent RV shed. (See the apparent difference in the above photo. )“Well shoot, it doesn’t match, but I guess that is OK”.  But then the next morning, with the rising sun on both eastern walls of each building, it was a perfect match!  Light and angle makes all the difference.  We noticed the same effect from the west side during different times of day. 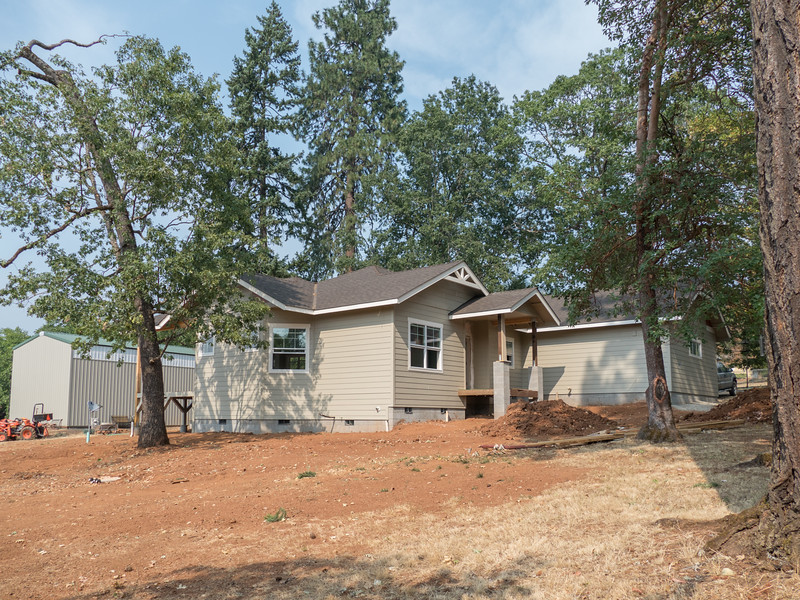 Deciding on a garage door was also a process.  There are only 2 colors that are standard, white and brown, otherwise the door can be overpainted with the house body color.  That isn’t really a good option because the exterior paint doesn’t wear nearly as well as the baked coating that comes standard on the door.  We were thrilled with the look of the door with the roof color.  We also were amazed at the quietness of the door itself.  You can barely hear it going up or down!

I was a bit concerned about our choice of Revere Pewter, a Benjamin Moore color, for the interior.  I searched and researched, and really wanted to try a warm gray.  But after years of warm earth tones in our homes, moving to gray was a big shift.  When I first walked in, I loved it, then I wasn’t sure, and then I loved it again.  The color is like a chameleon, shifting and changing with the different kinds of light in the different rooms. 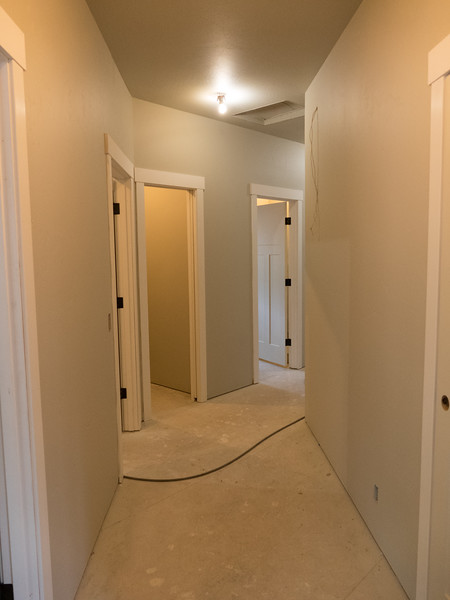 The subs all love it too, even the ones who say they don’t like gray.  Gary told of us a house they did where everything was gray, and it looked so cold and clinical.  Gary loves our gray and so do we.  It is soft and warm and will look great when the wood floors are in.

Another little glitch happened when the vinyl we had chosen for the bathrooms and laundry room was suddenly discontinued. 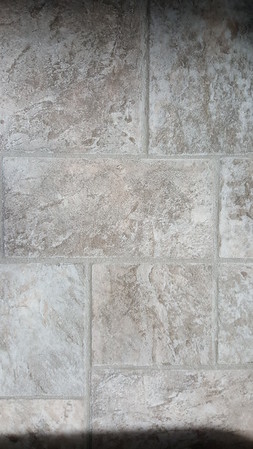 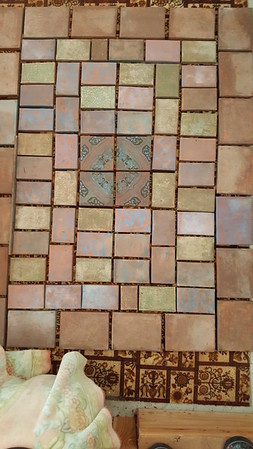 The one on the left was discontinued.  The new vinyl looks a little bit like our antique tiles on the right.

We spent some time at Lipperts, the flooring provider, and found something even better.  The first choice was an almost white that would have been similar to the marble surfaces that are in the bathrooms,  Instead, we found a diagonally placed stone pattern that includes grays, beiges, the blue-gray-green that is in our carpet, and the brown of the wood floor.  It looks much like the tiles that we are installing in the entry way, and even though it won’t be nearby, it will carry the theme throughout.  It will also be great for that main laundry room entry which I expect to catch most of the outside dirt.

Because the painter bid for only one trim color and only one interior body color, Mo and I decided to paint the upper interior of the tray ceiling ourselves.  We chose a shade of warm gray that is just a bit darker than the walls.  The separation of the two colors with the white crown molding will emphasize the architecture of the tray well.

Gary spent a lot of time with us this week, helping with decisions, working out the details of our custom closet packages, and helping with the final decision of the exterior accent color and which gables would be painted the deep brick color that we finally chose.  When we return, we will see how it all comes together.

Gary says we are doing great, that we are making quick choices and the build is going well and is on schedule.  Still, it is hard to not get impatient as we wait for each process to complete.  Cupboards are in the works, but the templates for the granite can’t be made until the cupboards are actually installed.  It is all so integrated, with each step forward required many steps completed prior to that next step.  We are amazed and impressed at Gary’s ability to keep everything moving forward and on track.  Lots of stories about private building contractors aren’t nearly so positive. 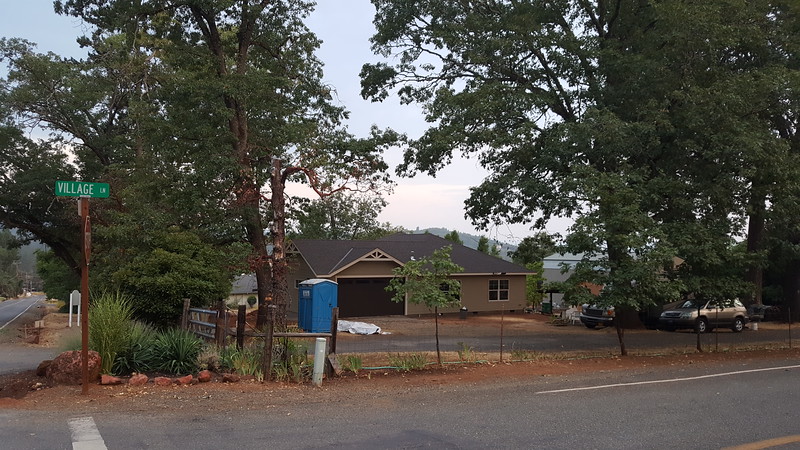 We are on schedule for a November 1 estimated completion date.  Let’s hope that everything keeps moving forward as well as it has so far.