Current Location:  The Cottage in Grants Pass, Oregon at 51 F and raining

For those who pay attention to this kind of thing, Mo and I have been off the road for two weeks after traveling in the SoCal area for a month.  Our winter trips are usually longer than this last trip, but life is calling, things are shifting, decisions need to be made and once again, boxes packed.  I wonder when we will ever be fully finished with moving.

Frost along Lakeshore Drive near Moore Park in Klamath Falls

Our 961 mile journey back to the apartments in Klamath Falls was accomplished without any major drama, in just 3 days, with an overnight at Orange Grove in Bakersfield, Flag City in Lodi, and a night at our very own Cottage in Grants Pass.  In spite of the major storms crashing into the Pacific Northwest during that time, we somehow slipped into perfect weather windows between storms, and sailed over all the passes between our desert respite and home.

Trying to shoot into the light to capture those icy diamonds.  Almost got it, but not quite

Most of the time, we chose to travel I-5 between Bakersfield and Lodi, but after that last extremely bumpy and very crowded trip south, we decided to take Route 99 from Bakersfield back north.  When we left Bakersfield, on a quiet Monday morning, we had not a lick of traffic all the way north to Lodi.  Most of the highway was resurfaced and smooth, albeit a bit narrow in places.  Turned out to be a great choice.  Checking google maps shows a difference of less than 10 miles between the two routes.

Once back in Klamath Falls, We had a day to unload, an evening to enjoy my grandson’s opening night of “Superman, the Musical”, a weekend to catch up on laundry and get things put away, and it was time for me to head to the office for a week of soil survey work.  I have no idea where the days go.  As soon as I signed off on Friday afternoon and turned in my timesheet, we started loading up for another drive to Grants Pass. 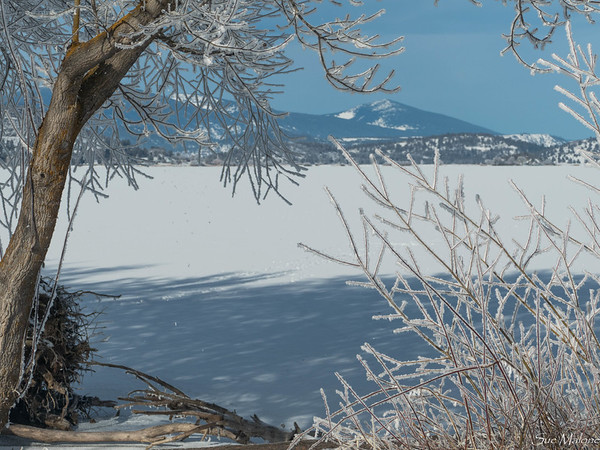 We knew we might be in for another storm over the mountains, but last Saturday morning when we left Klamath Falls we were treated to one of the delights of living in snow country.  The skies were crystal clear, the snow covered hills were sparkling with diamond dust, and the hoarfrost coated every tree and shrub along our route beside Klamath Lake.

Of course, I had to stop and take photos.   I knew from the weather forecasts that we were leaving behind the snow and ice and traveling west over the mountain into warmer but cloudy and foggy weather.  I need light, I need sunshine, but I also need to be able to walk, and ice isn’t my favorite thing.  I talked myself into being ready for the cold, wet fog that blankets the Rogue Valley during this time of year.  I soaked up that sunshine, running around shooting photos and trying to somehow capture that diamond dust sparkle.  I still have no idea how a photographer might do that.

From all that blue and crystal to this, but at least there isn’t snow on the ground in Grants Pass

During the week, we had a few more conversations with our builder and his foreman.  Little details were ironed out, and at last a price was agreed upon.  There was some touch and go for a bit, with Mo and I spending a few sleepless nights wondering if the project was going to actually happen, if we would have to start all over again from scratch, and how in the world that might look.  Thankfully, that isn’t going to happen, and the build is now officially on the schedule. 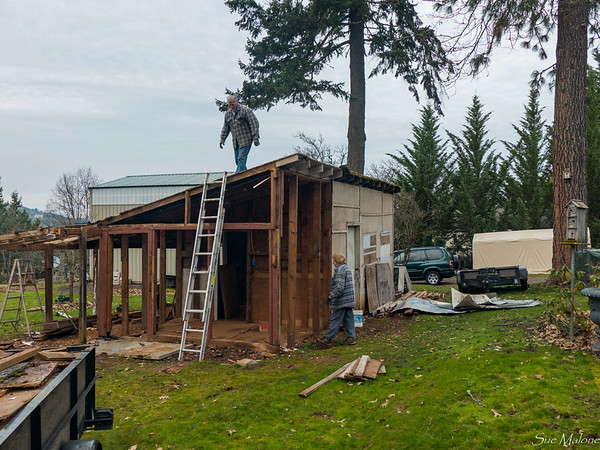 Still chilly at 37 F, but that didn’t keep these two from working long hours every day

March 20th is the big day, when the bulldozer and loader will arrive to knock down the sweet little cottage.  We still have quite a bit to do before that day, including Mo’s big project of getting the oldest part of her workshop down.  The people who lived on this place since the early 60’s believed in salvage building, and just added and added more and more stuff to the existing buildings.  Mo wanted the main part of the building, but not all those extra roofs and sheds and walls that were a crazy mess.

Mo did a lot of that demolition herself, with a bit a help from me, but I was incredibly grateful that her brother, Dan, once again offered to come and help with the hardest part, getting that roof off.  Dan showed up on Sunday, and spent 3 days here helping, and the two of them managed to get it all undone.  There was a bit of a scary moment, when Mo fell through the ladder, scraping up her legs and banging her chin, but thank goodness she was OK.  We all know ladders are scary things.  She knows better than to do ladder work with no one around, at least.

These two (Mo and Dan) are quite the team when they work together   FYI, we have no idea how we are going to get the debris off the top of the MoHo shed behind the little shop.  No ladder big enough around here

After Dan left, Mo and I spent a few more days hauling all the wood debris to the dump, and metal to the salvage yard.  Thank goodness once again for trailers and a truck to haul them.  In between rain storms, I even managed to get some of the fall leaves from the lower part of the acre raked into piles, ready to load into the trailers, once the debris was dumped. 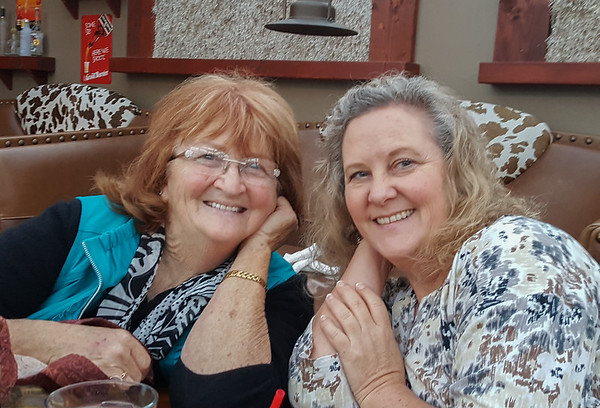 I won’t say how old she is, but my oldest daughter Deborah was born in 1963 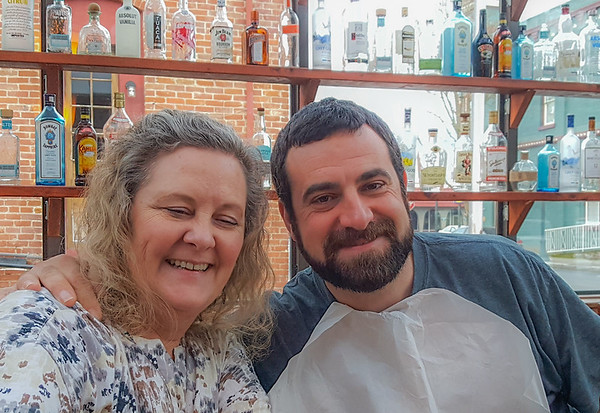 The food was fun, rather crazy pub food, with lots of creativity.  I couldn’t make up the sandwich the kids had, with some kind of mile high French toast smothered with cheese and ham, and drowned in maple syrup that was filled with bacon and serrano chilies. My Dragon Breath chicken was a bit more traditional, but incredibly tasty and also nice and spicy. 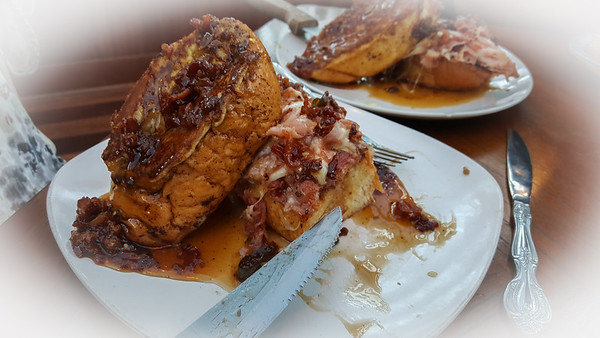 During our first few days here at the cottage, the skies were cold, foggy, and gray.  The forecast called for 50 degree temperatures, but with the foggy inversion, the temps never got above 37.  I was very happy to be working inside the cottage, packing up the few things we have used here during the last four years.

Then one afternoon, the skies opened up, and the sun burst forth in all her glory.  January was miserable, and on February 1st, it was like a huge shift.  The colors brightened, the grass seemed greener, and the 50 degree temperatures felt like tee shirt weather, at least for a couple of hours.

That night it poured all night, and the morning dawned rainy and drizzly again, but the foggy inversion was gone.  I think those inversions are my least favorite kind of weather, but I keep reminding myself that it may be foggy, but I can walk without crashing on some icy walkway.  At home at the apartments I can’t even manage to get across the road to the mailbox!

In between packing, raking and hauling, I have enjoyed some quiet moments reading my favorite blogs.  Erin is on a Round the World Tour, and it is a kick reading about her adventures without having to endure the wild seas of the Pacific Ocean.  It also has been great reading all about Nicki’s trip to Australia and New Zealand without having to get on 13 different flights.  Armchair travel leaves a lot to be desired, but on cold foggy days, it is pretty darn nice. 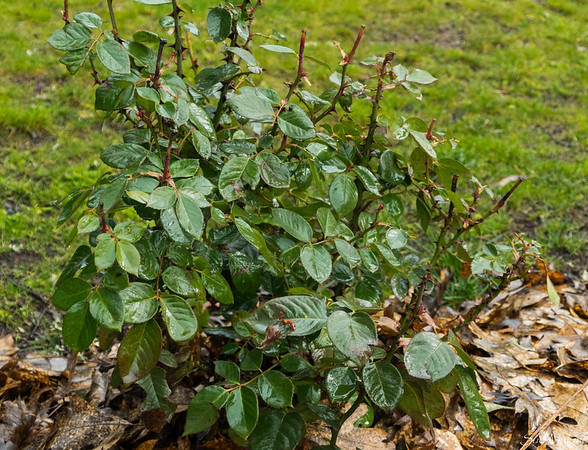 A mystery:  why haven’t the roses that I moved to Grants Pass from Klamath Falls not lost their leaves?

Our life is very focused right now.  I am working alternate weeks, and will be at the apartments while working. We will spend the alternate weeks at the cottage, finalizing the clearing out of the cottage, taking what we can salvage before the demolition, and making sure all is ready to go. So it will be a week at home, working soil survey, and a week at the cottage, working at whatever.  At least for the next few weeks.  After that….and on forward, it will be a week at home working and a week at the property, minus the Cottage, and staying in the MoHo, making sure the house build is progressing as planned! 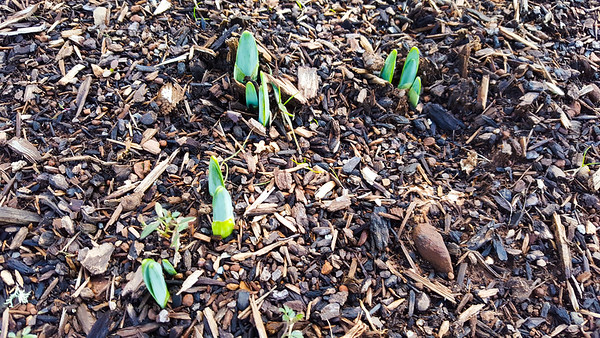 If the daffodils are emerging, it must be spring, right?!

The MoHo will have to come out of her home in the big RV shed for a time, while we store all our “stuff” inside during the building process.  I am going to miss our cozy little cottage getaway, but it is all for a good purpose, and eventually our new home on a similar but larger footprint should still have some of that cozy cottage energy that we have enjoyed so much for the last 4 years.