Amazing.  Before I say anything else, I have to say that the Tournament of Roses Parade is the grandaddy of them all, America’s New Year’s Celebration.  This was the 128th Rose Parade, celebrated every single year except 1942, immediately after Pearl Harbor.  In all that time, it has only rained ten times, and we were a bit nervous about the predictions for rain.  Those rains never materialized, and once again, the weather gods shined down on the celebration.

I have agonized a bit over writing this post.  Attending the parade was the main focus of this trip, the reason we signed up for our first group “Rally”.  I have been excited about doing this for a year now, ever since we signed up on January 1, 2016.

Was it all that I expected?  In some ways, more, in some ways less, and yet the overall experience was definitely all that I wanted and more.  The parade itself?  Maybe I was still caught up in my childhood memories of spending the night on Colorado Boulevard with a campfire on the sidewalk.  I have agonized over this post because part of me wants to make it easy and write about the parade, talk about the facts, the floats, how we got there and what we did.  That is easy.

I have an incredible number of photos, processed and ready for uploading, but that will have to wait until I return home to free bandwidth.  In the mean time, I have had the daunting task of picking favorites.

We were on the bus in the dark at 5 AM ready for the 5:15 departure.  Everyone was excited and as we rode the fast commuter lane from Pomona to Pasadena, the anticipation was palpable.  We were early enough that the bus parked along the sidewalk and there was plenty of room for our table loaded down with hot drinks, pastries, and fruit.  Just across the street was a bank of porta potties, one of several groups of such necessities, and the lines weren’t terrible and the potties were pristine.

This float is called “Echoes of Love”, sponsored by of all things, a TV show, “The Bachelor”.  It was on my top favorite list, but even more so after seeing it up close the next day at the post parade show.

Our group had three rows of seats, just back and up a bit from the sidewalk.  We were warned to do the necessaries before we attempted to sit in the stands, for good reason.  Once in the stands, it is not only difficult to get out, but difficult to even move around.  After 2 hours of friendly knees in our backs and rubbing shoulders tightly with our neighbors, we were ready to stand up. 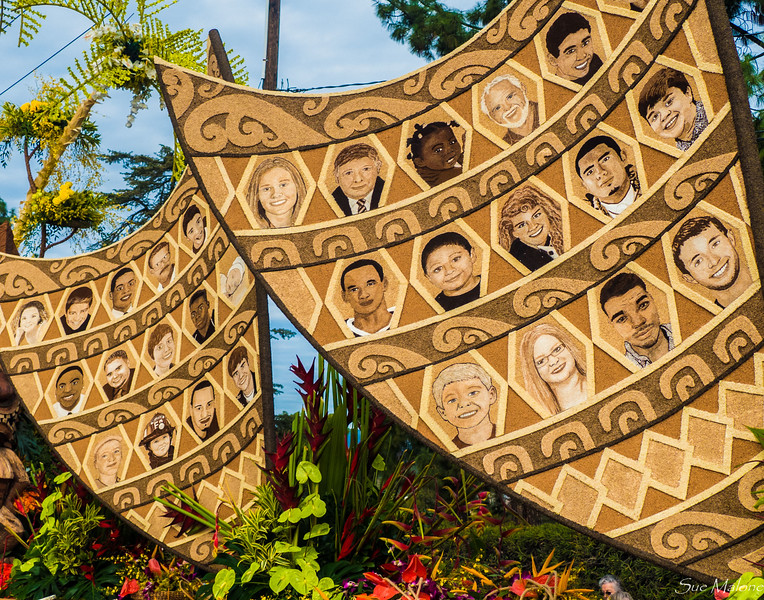 This float is called “Teammates in Life” made professionally by Paradiso.  The images are portraits of organ donors, done in many different shades of seeds and grains.  Up close it was breathtaking.

I spent so many years seeing the parade close up, and fighting the crowds, often standing the entire time, that I was tickled to finally have a chance to view it from the grandstand seats, something I had once coveted.  I discovered that grandstand seats are nice, but somehow you are a bit insulated from the thrill of the floats up close.  Everything seemed to pass by so quickly, and with no HGTV announcers to tell us what we were seeing, we had to refer to the parade program to figure it out, during which time the float was already gone.

Our friend Laura did the parade a bit differently this year.  She rented a space for their RV in a lot facing the street and set chairs up right on the parade route along the pavement.  I think she saw things up close in a way we didn’t, but we got to see things from above in a way that she didn’t.  A bit of a quandary.  One that was completely solved by the next day’s event, the Post Parade Float viewing along Sierra Madre Boulevard.

The parade lasted almost exactly 2 hours, with 42 floats, 21 marching bands, and 20 equestrian units.  Most of the bands performed as they passed our grandstand, located right at the beginning of the parade route at the base of the Orange Grove Boulevard hill.  Of course I had a few favorite floats, but as I reviewed my photos, I could see that the gray skies and viewing location didn’t really give me that old feeling I was searching for.

This float is called “Spirit of Hawaii” made by Dole to remind us of the rich history between Hawaii and Dole.  As you can see, the amazing detail wasn’t easily seen as the float passed by, but the after parade show revealed all.

That old feeling came back full force the next day, as we entered the Post Parade show.  Finally the fragrance of the flowers and the amazing complexity and magical colors of the floats were right there in front of me.  I was so happy I was beside myself, and that tiny disappointment that I felt from the day before completely evaporated.

“The Monkey King” by BDK, weathers countless trials on his journey to success.  Celebrating the ending of the year of the monkey.  This float epitomized what the commercial floats can do with unlimited funds and resources.

We spent four full hours walking the length of the show along the closed boulevard, enjoyed the most expensive big pretzel we ever ate for five bucks, and I took so many photos I wore out two batteries for the camera.

However the very best part of the day could have been the worst.  Stopping to buy a street taco for lunch, I put my wallet in my Adventure Caravans burgundy jacket to walk over to the kiosk.  Back to the bench for lunch, and then Mo and I wandered off to leave the show, with the jacket still on the bench.  I realized at the last minute before we reached the exit gate that it was gone and ran back to find it was no longer there.  No problem, I thought, I can replace the jacket, entirely forgetting that I had put my wallet in the pocket instead of back in the bag we were carrying.

A long walk and then a shuttle ride to the waiting bus, and as we were getting ready to pull away from the curb, Mo thought to check the purse. No wallet.  You know that sinking feeling?  Yeah, that one.  I jumped off the bus, in a panic, asking Claudia if anyone knew of a lost and found number.

“Doing Good in the World” by the Rotary Rose Parade Float Committee. Not a professional float builder.

Here is where the story gets really good.  Hex, our wagonmaster/rally leader jumped in, took my arm, and said, “I’ll walk back with you.”  He got us back into the show without tickets, talked to the white coat guys, found the lost and found where the first person had no clue how to use the radio, talked to more people, found a person with a radio, and lo and behold, some really kind family had turned in my jacket with the wallet still in the pocket.  Hex called the bus driver, who had to negotiate some crazy traffic barriers to get back to us, and we walked as fast as we could almost all the way to the freeway to meet up with the bus.

I have to say thank you to Hex, for jumping in so quickly to help me, and to all the folks on the bus who waited so patiently for the two of us to get back on the bus.  Finally, still a bit shaky over the whole thing, I settled in with Mo for the long ride back to Pomona and our final afternoon at the fairgrounds.

Adventure Caravans treated us to a catered dinner for the last night of the Rally, with folks gathering around the big tables, sharing stories of where they were going next, and praising the rally crew for the great job they did.

Here is a shot of Hex at the grandstands, still trying to herd cats, aka rally folks

Finally, would we do another rally or caravan with Adventure Caravans?  Possibly not.  Not because they didn’t do a great job, they most certainly did.  However the busy schedule and the focus on social activity is a bit much for our independent style of travel.  Most of the attendees were great people, with just a single exception, but that exception could make traveling in a group not much fun, and of course, there always seems to be “that one”.

Both of us were extremely glad we chose to do this rally, however, saying over and over again how grateful we were to not have to deal with all the logistics of attending the Rose Parade.  We loved having the extra venues, the extra shows, and loved not having to drive much in that traffic or try to find parking, or pay for parking, which often cost as much as the event itself.  We saw and experienced things we probably wouldn’t have managed on our own.  In that respect, it was a truly great trip and an excellent choice for what we wanted to see and do. 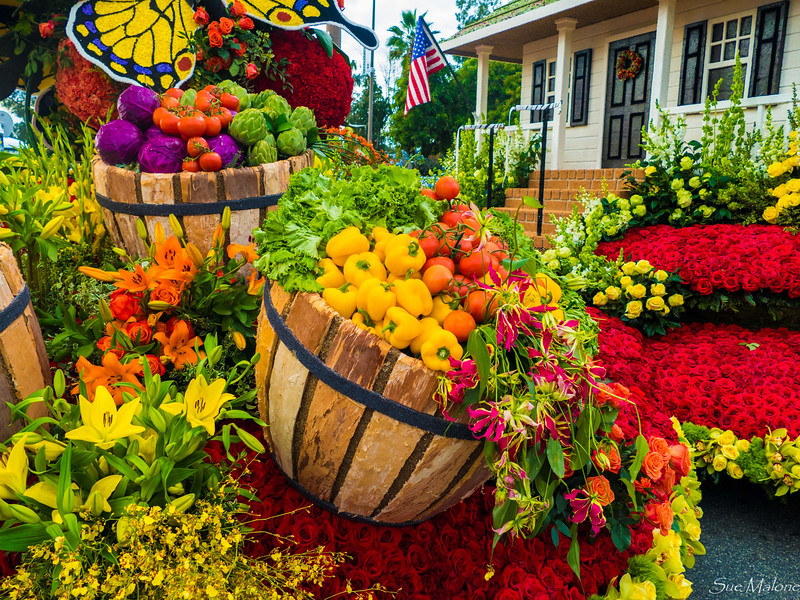 Another favorite from the post parade show, by Ragu Pasta Sauce, called “Simmering in Tradition”.  I barely saw this one as it passed by in the parade.  What a difference up close.

I fulfilled my dream of once again attending the Rose Parade, and now I will be perfectly happy to watch it full screen on the big TV with the HGTV announcers telling me all about the floats, the bands, and the horses.  When I close my eyes and remember, what I remember most isn’t the parade, but that amazing BandFest performance, waiting in the dark for the parade to start, and staring in awe at the incredible floral work on the floats up close. 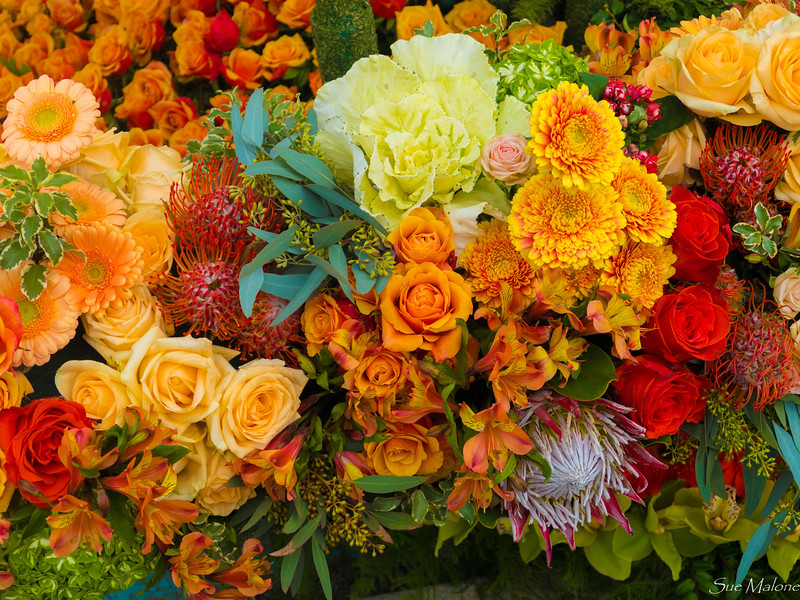 Just one example of the incredible floral artistry that covers every square inch of the floats.

Remember this CalPoly float from the pre-parade show?  It was incredible.

I had to chose, and it was incredibly difficult.  There were several floats that I really loved that didn’t make the cut for the actual parade, but are in my gallery of post parade floats.  If you want to get a taste of the up close flowers, the incredible artistry, the creativity and imagination that goes into this, check out the gallery here.