(Very few photos.  If you want to see the rest it will happen long after I return to Klamath Falls in late January)

I so wish I had a photo of the Interstate from our drive this morning.  Almost everyone here at the Rally, including Jimmie and Nickie, have horror stories of the horrendous traffic over the Grapevine and on the 210.  I was driving, hence no photos.  Mo isn’t inclined to grab the camera for pictures of traffic, or the lack of it, and I didn’t think to encourage her.  I was too amazed at the ease in which I sailed over the legendary pass and into legendary LA traffic.

Somehow our timing must have been exactly right.  We left Orange Grove at 7am, fortified with their famous donuts and coffee.  It is smart to wait till 7 when the office opens so you can get a couple of those donuts for the road.  Another little perk for this place, and they are fresh from the bakery delivered moments before opening, and of course complimentary.

As we approached the pass, we could see a light dusting of snow all around the mountains to the south.  The snow was at our elevation, next to the road as we reached the summit, even though the temperatures were in the mid 40’s.  Glad we waited out the storm, since rumors have it that the Grapevine was closed a few days ago.

There are 5 lanes on the pass, two on the right for trucks, and only a very few times did a slow truck in the middle right lane cause me to jump over into the left lane to pass.  And yes, trucker daughter Deanna, there wasn’t a car for at least a mile behind me to get frustrated with the 60mph that I managed to do up the hill, only slowing to 55 in the steepest parts.  All three lanes to the left of me were almost completely empty until we were within a short distance of the 210 Pasadena offramp.  Once on the 210, it was again smooth sailing, with very little traffic.  I thought to myself, gee, LA traffic isn’t nearly as bad as I remember.  What are people complaining about?

We heard a lot of that complaining later in the afternoon as some of the folks here raved about the horrible traffic, the accidents, the complete stops and then stop and go for miles and miles on the 210 even today, after we passed through.  Travel angels are with us for sure!

The smog even left us this morning, with the folded, tortured and twisted ridges of the San Gabriel Mountains completely clear.  By the time we reached our turnoff, the skies were gorgeous, the mountains brilliant in the sunshine, with snow on Mt Baldy, and temperatures here in the low 70’s.  Time to peel off the sweatshirts, we are in Southern California!

This rally has shifted around a bit since we purchased our tickets last year.  Initially we were to be in a lovely county park at a lake in nearby San Dimas, big sites, lovely amenities.  Later on, we were told the venue had been moved to the KOA at the fairgrounds.  Even later in the process, were were informed that we wouldn’t actually be camping at the KOA, but on the pavement inside Gate 1 inside the grounds themselves.

That didn’t sound too good to us, although photos and reviews of the KOA weren’t exactly riveting either.  Picture all those overcrowded KOA’s that keep you from going to a KOA if you can help it and you have the idea.  Our instructions were to check in at the KOA and then go to Gate 1 to find our group.  I do have to say that once we saw the KOA and then once we were settled into our spot here in the parking lot, we were quite happy to be right here where we are.

We may be on pavement, with no picnic table or trees, but we are parked along a large grassy space with plenty of room to walk the dog, set out our chairs when we get around to it, and enjoy the sunshine without all that crowding.  Twenty Seven rigs are lined up here, with 54 people attending the rally.  Many, like us, are first timers, but there are also about half of the group who have traveled with Adventure Caravans more then once.  One couple from South Carolina have been on 31, yes 31 tours with Adventure Caravans.  Sheesh!

I think there were several others who, like us, didn’t want to deal with the logistics of the parade and yet still dreamed of seeing it, either once again to rekindle childhood memories, or for the first time. Of course, during the orientation, there was the obligatory “Stand up and tell us who you are” thing that Mo really doesn’t like and I tolerate.  That is how I know why people chose to come on this Rally.  And Melody, just for you….one gentleman and his wife introduced themselves and said that they had been very busy campaigning for Hillary.  Of course several people popped up and said they voted for Trump, but several people also cheered Hillary.  So everyone isn’t of the same mold, which is nice. Hopefully that is the last time that political conversations are part of the entertainment.

After we arrived, Mo and I decided to go to the RV show across the street.  Everyone was just soooo sooo friendly here at the rally and we weren’t quite ready to be all that social, so we escaped.  The “huge” RV show wasn’t all that huge, but we did enjoy checking out the new AXIS rigs, nice size at 24 feet, with a big class A type window that could entice us.  But in order to keep the price point reasonable, they don’t have many of the niceties that we have in the MoHo.  We are so dang spoiled, so even with 90K miles and 9 years on her, we are in no way ready to give her up.

Our “wagonmaster” Hex has been great.  We managed to get the only site that has only 50 amp posts, and we don’t carry a converter.  Within 5 minutes, Hex had one for us.  He also recommended a service being offered by Adrian’s, who was washing and waxing rigs.  We have always done our own washes, and have never succumbed to this kind of luxury.  We decided to give ourselves a Christmas present and paid $150. for the most amazing cleanup we could imagine.  The rig was washed and waxed to perfection, including the roof, and all that water spotting that I could never get off the windows completely is gone!  Worth every penny.  I am sure we won’t do that often, but it sure was fun.  The MoHo looks brand new! 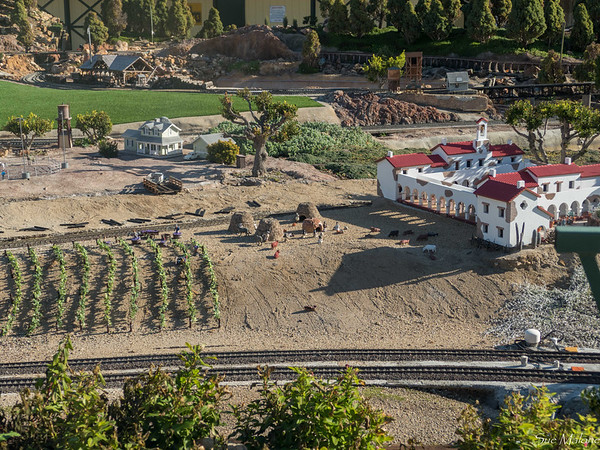 As I walked around the complex, it began to dawn on me that I was standing next to the original garden railroad exhibit that was at the heart of the LA County Fair.  I stood here as a kid, enthralled by the trains and the miniature buildings.  I took Mattie walking around the empty complex, the huge buildings that house the exhibits were built in 1938 by the WPA.

This fair, every September, was my annual birthday celebration.  Our family always had 6 little foster kids, always younger then me, but for this one outing every year, the kids were left at home with mom, and dad took just me to the fair.  I looked at the huge buildings, one for flowers, one for vegetables, one for housewares, and then walked out to the animal barns, now empty, but filled with memories of the Budweiser Clydesdales and huge pigs and cows and sheep.

Whenever I go to a fair now, it is always colored by memories of this one.  Nothing can measure up.  It was crowded even then, back in the 50’s.  I can only imagine what a zoo it must be now, and have no desire to repeat the experience.  Walking alone around the buildings and walkways and midways and barns was a perfect way to relive the memories. 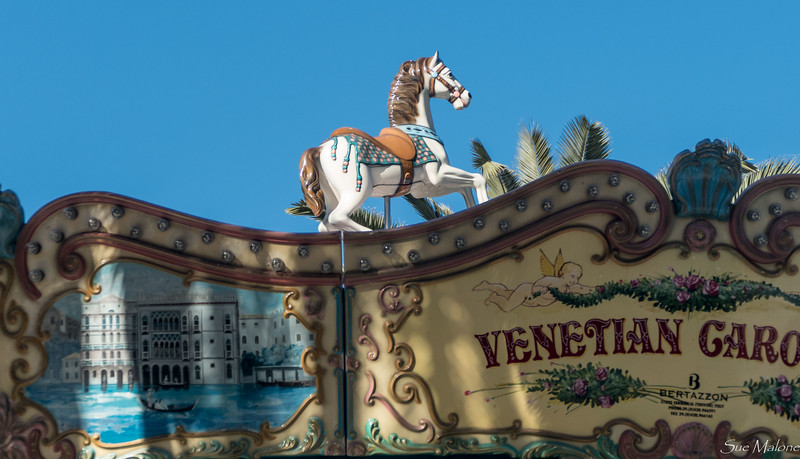 Later in the afternoon, after Jimmie and Nickie arrived, we settled into the big tent for “orientation”.  The previously mentioned introductions were part of the process, and then all that other stuff that seems to go with any kind of “tour”.  A few itinerary changes, the most disappointing being the EquestFest horse show.  Seems as though there is some kind of equine herpes virus outbreak going around and in order to protect the horses, all horse festivities prior to the parade have been cancelled.  Sigh.

Raincoats are in order, however, and that is another sigh.  It has only rained 10 times on this parade, with sometimes more than 50 years between rains.  The last rained out parade was in 2006, and this year the weather predictions do not look good.  I guess we need to appeal to the weather angels to hold off just a bit.  Please?