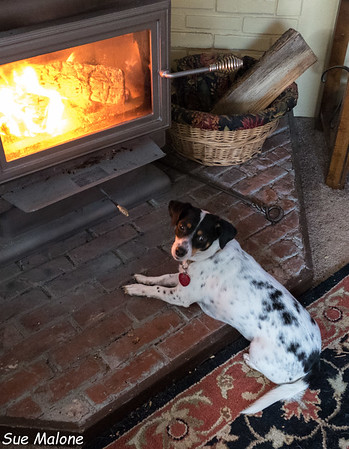 I had no more finished publishing the last post than things started changing.  First of all was a sweet solution to the Mattie problem.  Our blog friend Laura read the post and immediately wrote saying she might have an idea.  I met Laura last summer for lunch in Ashland when she and Alice were traveling.  We had followed each other for some time and it was great to get together and meet in person.  Laura is a dog person, and a motorhome travel person, and since she lives near the Pomona fairgrounds, she sweetly offered to come during the days we had to be away and take Mattie for a potty break and a walk.  Amazing!

Next I called Orange Grove RV to confirm a two day reservation.  That place is getting so very popular with people traveling to and fro in Southern California that we learned the hard way that reservations are in order.  Well, popular is an understatement.  The price went from $34 a few years ago to $37 last year (with a cash discount) to $47 per night this year with no cash discounts offered, just $4. off with AAA or AARP or Good Sam.  Geez.  We looked at each other and said, “Why not just stay right here for two nights?”

Mattie loves heat, crawls as close as possible to the fire at home

We have open skies to fiddle with the satellite, paved space to keep out of the mud, a nice big doggie park, and sunshine.  With our Passport America this park is only $27 per night.  I really do need my oranges, so we will still go to Orange Grove, but for one night only.  Oranges for $17 bucks extra and 25 miles out of our way.  They really ARE that good. 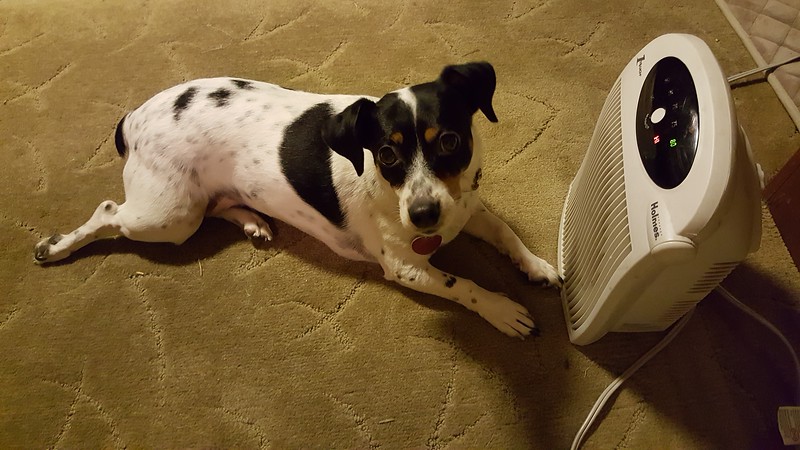 Next up was going to the park office to pay for two nights instead of one.  I asked about the TV thing, and sure enough, this past year they upgraded to digital.  At the moment, Mo is outside hooking up a very long cable that we can bring inside so that we can hook up the digital converter box and hopefully will discover that it actually works and we can get digital cable from the park.  Our other techie problem is our TV antenna.  It isn’t digital either, so when the girl at the counter said, “Just put up your antenna and you can get 45 channels from Sacramento”, we just smiled.  Mo purchased a digital antenna long ago to replace the original one, but it didn’t have room to retract on the top of the rig, so she removed it, so no, we don’t have a digital antenna either.  Technology shifts so fast you can’t be slow!

We do have a digital to analog converter, but so far the problem has been figuring out how to make it actually work.  It is now noon, and we have given up.  When we hook up the box, it can only be seen on input 3 and cable can only be seen on input 7, and when we program the box on 3 we get a bunch of strange channels that the maintenance guy can’t figure out at all, not the regular digital channels that come across the Direct TV cable.  It is all too weird.  Solution?  Figure out how to get a digital TV  in the space that we have and for the time being, forget about TV!  A big glass of wine should get us to the next project….getting our King Flex satellite to work with our new Direct TV receiver.  A BIG glass of wine.

A bit later, after the wine and lunch, we tackled the King Flex satellite system.  The system worked fine for a few years, since we got it in 2014, so it obviously isn’t that old.  Last year, when we had to upgrade our old Direct TV receiver, it quit working.  After a long day on the phone, I learned that it needed updating, and King sent us a big update file that had to fit on a 4 gig or less USB stick.  You can’t buy those any more, but I did manage to find one buried in an old drawer.  We upgraded the system, but it still took a long time on the phone to get it to work.  That was back in May.

When we traveled last summer to the family reunion, for some reason it would no longer work.  Direct TV isn’t very helpful because they don’t understand how these RV satellites work, and they keep wanting us to do things related to the big satellite at home where the system works just fine.  Sigh.  So this afternoon we hooked the system up again, with completely clear skies, and in a fairly short time the converter showed full reception on the satellite system.  The Direct TV receiver, in spite of tracking the numbers of the transponders, still said there was “no signal”.  I forgot this was a holiday, but was reminded quickly when I put the call into King.  They are closed for the holiday.  Of course.

So we put the satellite away, put the non working cable digital converter box away, turned off the TV and spent the afternoon laughing and playing cards.  In spite of the tech issues, it has been a lovely day of down time.  There haven’t been many down time days in our life lately and that is the one thing we can count on when we get away in the MoHo.  We will usually manage to have some quiet days without a lot going on.  Much like being on a cruise, we have learned after more than ten years of RVing that you don’t have to keep running around doing everything all the time.  Whatever wonders may be out there will still be there next time.  We could have dressed to go wine tasting (we love Old Vine Zin’s which Lodi does better than anywhere).  We could have visited the Jelly Bean factory.  Instead, we hung around home, and thoroughly enjoyed it..

It is still fairly chilly, even with the sun shining, so I wrapped up in a warm coat to take Mattie to the dog park.  The “park” is simply a fenced storm water control basin, but is full of grass and good smells with lots of room to run.  Surprisingly, both times we visited the park, there were no other dogs around so Mattie had the place entirely to herself.  Today there were only a couple of Snowy Egrets pecking around, but last night there were more than a dozen, including three Great Egrets as well.  Their view from this spot certainly isn’t what our Klamath Basin egrets enjoy!

Our plan now is to leave as early as reasonable tomorrow morning with hopes that we will get to Orange Grove RV in time to set up the satellite again, and make the call to King on the east coast before they close.  Mo is a lot more patient than I am with all this stuff, and after things don’t work I just throw up my hands.  She wants to keep trying.  Our testy comments to each other are good natured most of the time at least. I just want to buy all new stuff and have someone make it all work. Mo, in her best thrifty fixit self, wants to make what we have work.  Most of the time it eventually does work out.  I guess we will find out tomorrow!

Now, for those of you who said you were glad I was posting again….really??

Hopefully as the week progresses there will be more interesting stuff to talk about.