I was excited about coming here.  In January of 2014, while camped at the Family Camp in Tucson, Mo and I spent a day hiking in Catalina State Park.  The skies were impossibly blue, many trails were dog friendly and after checking out the spacious sites in the campground, I wrote that I wanted to spend a week here someday. 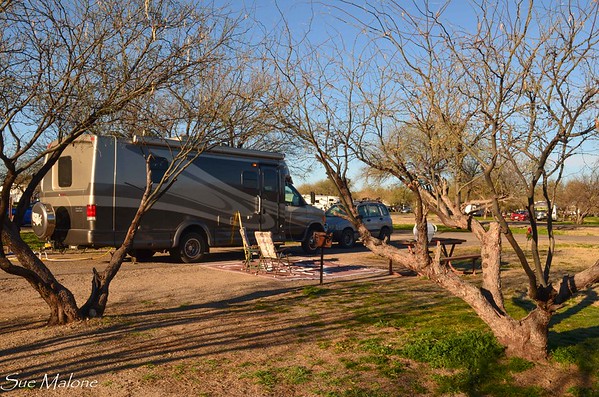 Site B 12 back in at Catalina State Park Campground

We managed to get 4 days, with reservations for this park almost completely booked up when we made the decision to travel to Tucson this winter. Both campgrounds are full, the A loop with no hookups, and the B loop, where we are located, with water and electric. We opted for a back-in site, on the outside loop for the privacy and the benefit of open space on two sides of the rig. 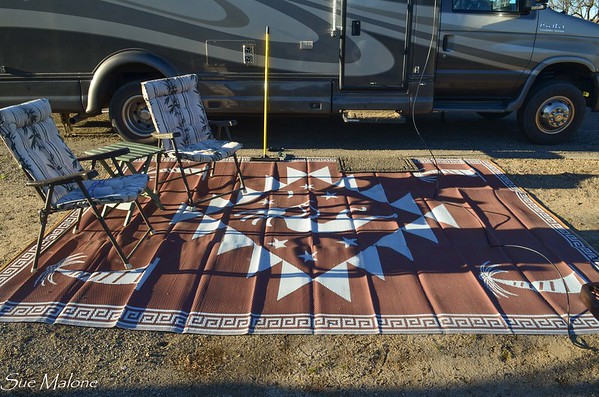 There is a miniscule visitor center at the entrance to the park, with a small selection of books and maps, tee shirts and a very nice 3d map of the Catalina Mountains, with park trails and other extended trails that lace this part of Arizona with some excellent hiking opporunities.  What we like most about this area is the variety.  You can hike easy flat trails for birdwatching, several nice loops with different levels of effort, and always the tougher trails into the wilderness, where the management of the Big Horn sheep population is priority.  No dogs in the wilderness, but there are plenty of places to hike outside the wilderness boundary that are dog friendly. 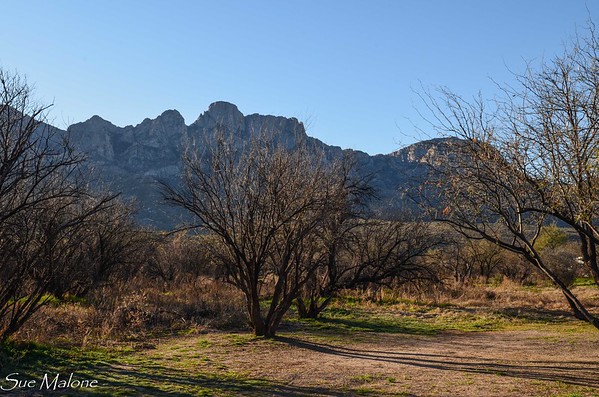 What I had forgotten about this park is how useful the bikes would be here as well.  The park roads are wide and meander through the landscape.  It would be a nice place to ride.  We didn’t bring the bikes or the kayaks on this trip, but if we come here again, we will be sure to load up the bikes.  When planning the trip, friends and hikiing were the prioriies, so no bikes on the rig.

We arrived after a nice drive from Quartzsite, meandering along I-10 and turning south toward Gila Bend and I-8, avoiding the Phoenix traffic.  Catalina SP is on the northern edge of Tucson, so we avoided Tucson traffic as well, and pulled into the park mid-afternoon.  The funniest thing of all about this place is how lovely, quiet, and remote it feels.  Especially considering that just west of the park entrance is a very large mall, with Red Lobster, Olive Garden, Best Buy, a bunch of other stuff, and a very giant, almost upscale WalMart, with excellent ambient music piped into the parking lot. So while camping in a lovely park, with open spaces and a magnificent view of the Catalina’s to the east, it is easy to slip over to the mall for any necessities.

Here you go, Loree, the little ant made by the Anza Borrego sculpture dude 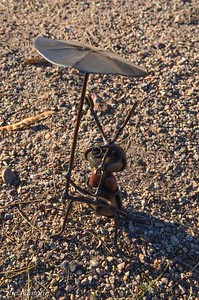 We have Direct TV, set up at the cottage in Grants Pass, and only one receiver.  In the upgrade process involved in moving our TV service from Rocky Point to Grants Pass, we only had the option of getting an HD receiver.  Our King satellite is compatible with it ,even though we only get SD, but the new receiver only has an HDMI outlet, and we were at a loss as to how to get the TV and the receiver to talk to each other.  We neglected to try out the new combination back in Grants Pass before we left and hadn’t tried the new TV, satellite, receiver combo till we got here.  Thanks to WalMart we were able to buy a simple sd three prong cable but still couldn’t get the TV to see the Direct receiver.  I can’t even explain the very long process spent on the phone with Direct TV trying to communicate our problem, and how we could fix it.  You wouldn’t believe all the answers that didn’t work that we got from the various technicians.  Now for the best part.  Remember that channel 3 channel 4 thing?  That thought came to us in the middle of the night, and sure enough it was as simple as that.  We now have TV if we want it.  Not a lot, but enough to hear about a bit of what is going on in the world. 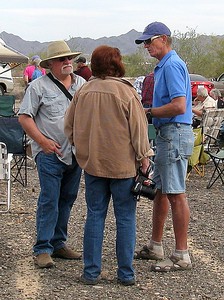 Ahh, a photo from Al’s blog of me with a couple of my most favorite bloggers

We also had some issues with our semi automatic levelers.  No matter what we tried, we couldn’t get the back left one to drop down.  It  wasn’t much of an issue at Catalina spa or Quartzsite, but even though the sites here are reasonably level, we really needed our levelers, with the left side too low for comfort.  So Monday morning, we were a bit unlevel, had no TV, and then when we turned on the water, we had no water.  Without paying attention to the weather forecast, and our outside temperature showing 33F, we didn’t think it could have frozen.  Wrong.  Frozen at the inlet, so we unhooked the hoses and turned on the house water which worked just fine.  We have since unhooked the water every night, with temps ranging as low as 28F in the early morning.

Our first full day here was a bit overcast, but in the low 60’s.  Perfect for hiking.  We set off to explore the Romero Ruins with Mattie.  It is a nice short hike across the seasonal stream which had a bit of flowing water, up the hill to the terrace overlooking the Oro Valley.

The terrace was home to the Hohokum people around 1,100 AD.  They grew crops in the fertile valley below, and hauled their water up the slope to their small village above the flood zone.  Hmmm, people smart enough to not build in a flood zone!  1000 years ago no less. 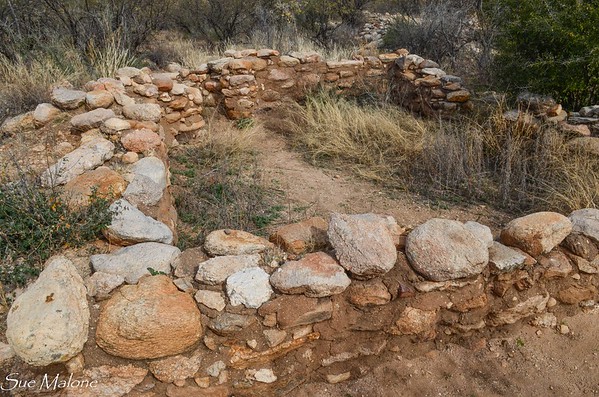 The ruins are simply small stone walls, but the signs and documentaion of the work done in the area do an excellent job of explainiing what was once here.  In addition to evidence of the people from 1,100 years ago, there are also middens that suggest occupation around 500 AD.  The latest site in the area is the Romero Ruin, a ranch built in the mid 1800’s.  The history of this area is quite complex and interesting.  Lots of archeaological sites are being studied in the Tucson area with more and more discoveries all the time.

As we descended from the Romero Ruin loop, we spied an unnamed trail meandering off to the southeast toward the mountains.  What the heck, let’s check it out.  It would be almost impossible to get lost with the mountains to the east and the highway to the west, so I wasn’t concerned that we didn’t have a map, a gps, or a phone with us.

Hiking up toward the base of the canyons, we ran into some people who said if we continued, we would come to water in another half hour.  Wow, canyon pools and waterfalls!  We continued southeast on the fairly easy trail.  Finding the pools and the beautiful water smoothed boulder was a big treat. 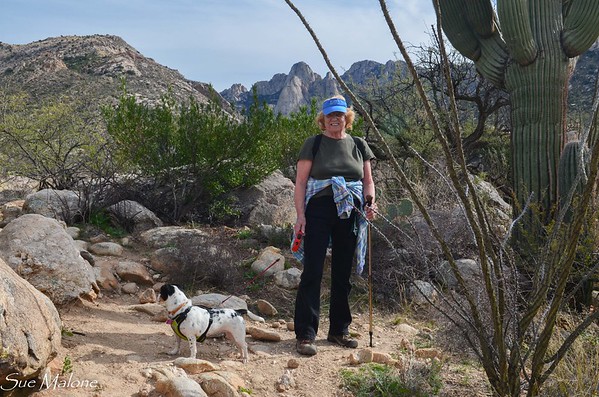 A few people were returning from the pools on the route we had just finished, and they told us that if we crossed the pools there was trail that continued along the south side of Alamo Creek back down to the main road of the park.  Whoopee!  Nothing we love better than a loop hike, so we found the trail, and hiked down the creek, crossing it several times, before we ended up right on the park road, just a quarter mile or so south of where we had parked the Tracker at the Romero Ruin trailhead. 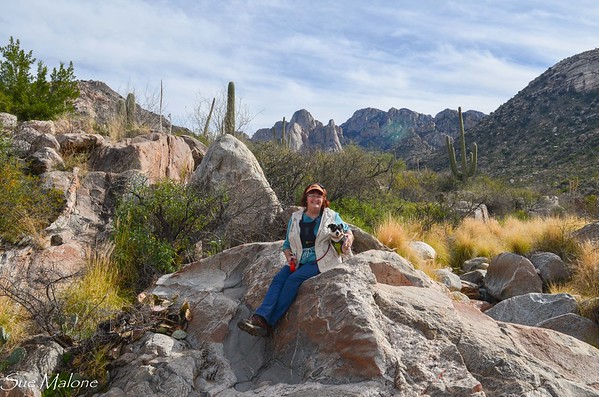 Later I found out that this unmarked trail was called the Alamo Canyon Loop, and isn’t listed on the state park trail map, but can be found online in a few places.  Great fun. 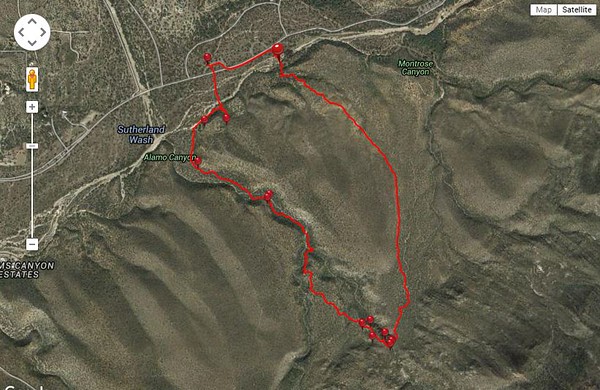 By the time we got back home, Mattie was ready for a rest.  I think we hiked a bit over 5 miles, including the 3.5 miles on the Alamo Canyon Loop and our meanderings around the Romero Ruin.  I still have the FitBit in a plastic bag in the computer case.  I suppose I need to get it out and get it up and running again! 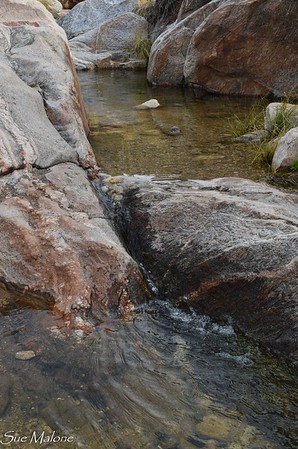 I had a steak that we planned to split for dinner, and suddenly thought, “Where is the BBQ?”  I have only one WeberQ, and we will pack it back and forth between Rocky Point, the apartments, and Grants Pass.  We use it in the rig and at home.  I really want to get one for home, so we don’t have to keep packing the thing around, but so far haven’t managed it.  Mo put it in the Lexus when we drove from Klamath Falls to Grants Pass, where it should have been transferred to the Tracker for our trip.  Oops.  We laughed when we figured out that the much loved and used BBQ was still sitting in the Lexus parked safely in the MoHo shed at the cottage in Grants Pass.  So no bbq’s on this trip.  Instead, I pulled out our trusty little miniature Foreman Grill, and it did an Ok job on the steak.

Little glitches are funny, and can make us laugh a lot.  The last little glitch that unglitched happened that evening after the hike.  I attempted once again to level the rig as best I could with only three levelers, and suddenly the left rear light went on and the leveler dropped to the ground.  Perfect.  We have TV, water, and are nice and level.  We lost of couple of important things and then found them.  Funny how things can be troublesome and then simply smooth out without any real effort on our part. It makes it easier to let go a bit when there are problems knowing that sooner or later they will eventually get solved.  Although I do have to say the problems we have encountered so far are pretty small and petty, not really big ones like some of our blogger friends have had to deal with.

A good day in the beautiful Sonoran deserts of the Southwest. Tomorrow we will spend a day and evening with our friends and one time Rocky Point neighbors, Wes and Gayle,  who live south of Tucson in Sauharita. Rumor has it they have some surprises for us!