Arriving in Hilo just a bit after sunrise was lovely in spite of the cloudy skies. We ordered our stateroom breakfast early since our group tour was at 8:30. Neither of us have been to the Big Island, and we thought it might be nice to see a bit more of the island than we might manage on our own. Hawaii volcanoes are tremendous, and we wanted to see them, but didn’t want to take a chance not getting back to the ship in time for sailing. 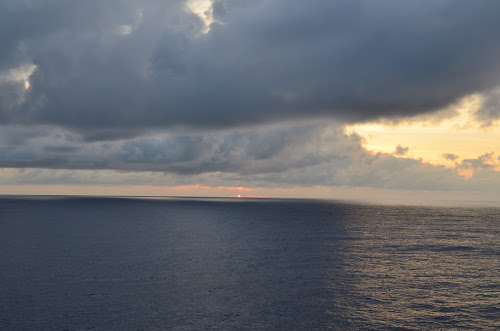 In retrospect, I think we might have seen more if we had decided to rent a car. The tour bus trip was nice, the driver kept up a running commentary about the history of the island, of Hilo, of the volcanoes. We rode about an hour before arriving at the visitor center for Hawaii Volcanoes National Park near the rim of the Kilauea caldera. 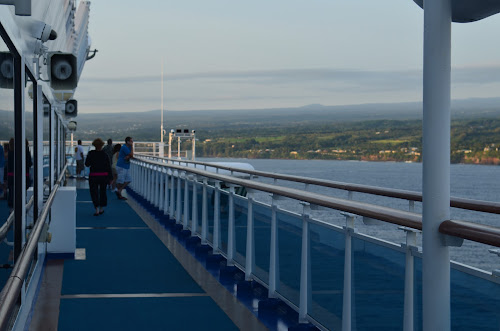 The visitor center as great, and the volcano obliged nicely by popping out some sulphured steam. It has been continuously erupting for some time now, but we weren’t able to get to the other side and see the actual lava flows. That was a bit of a disappointment, but none of the tours could go there because of the dangerous fumes and the danger. I am not sure if we could even get there on our own in a rental car. Somewhere along the way, I heard that it was 8 miles from the nearest road. 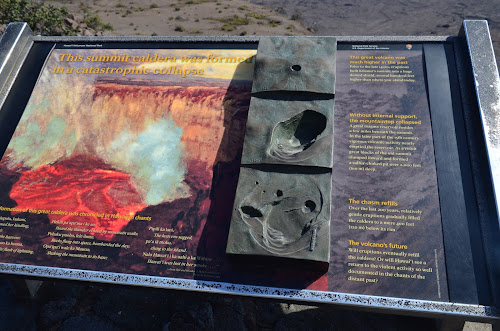 Kilauea is much smaller than the huge mass of Mauna Loa rising above more than 13,000 feet above sea level. Mauna Loa is the largest volcano on earth in sheer mass, with a rise from sea floor to summit of more than 30,000 feet. Both Kilauea and Mauna Loa are shield volcanoes, unlike the stratovolcanoes which are formed in our own Cascades by explosive eruptions. The shield volcanoes build with flow after flow of lava that build broad, gently sloping mountains. 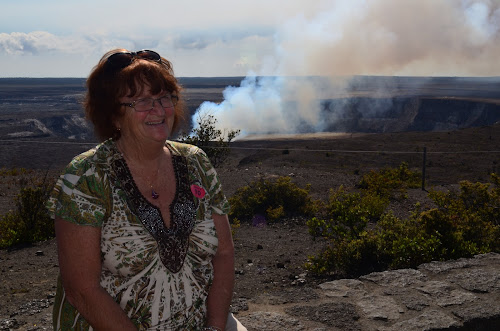 We did have enough time to walk through the Thurston Lava Tube, much like some of our own lava tubes in Oregon, but much taller, no hard hats required, but I was glad for my walking sticks. After a few days on the ship, solid ground makes me sea sick and I have to wear my wrist bands and use the sticks to keep my balance. Silly. 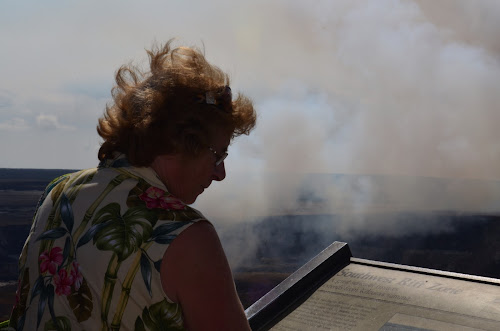 We had just under an hour or so at the visitor center, before we continued a few short miles to the Jagger Museum, also on the rim of Kilauea. Half an hour there and again we were back on the highway heading down the mountain toward the Macadamia Nut Farm. I guess the farm is a requirement for any tours on the island, even on weekends when the factory wasn’t actually working. 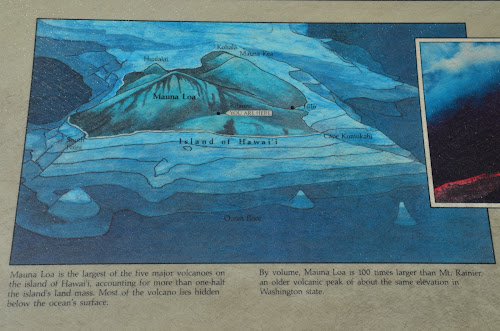 I would have loved more time to hike around in the park rather than go to the farm. The only redeeming quality at the farm was the garden, with all sorts of tropical fruit trees with strange looking unfamiliar fruits. Neither one of us gets all excited about macadamias, but we did take time for a rather incredible scoop of macadamia chocolate ice cream. 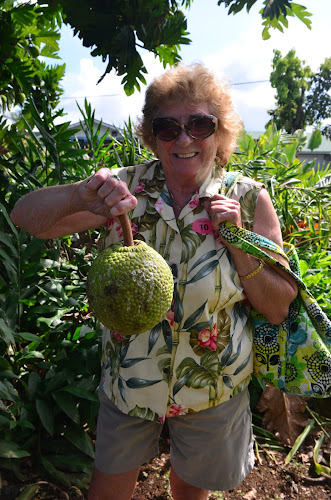 The weather was gorgeous by afternoon in spite of the morning overcast. We never actually saw much of Hilo. I could see it on the map, and could see it in the distance from our stateroom, but finding transportation that late in the afternoon with a 4:30 sailing time seemed too much to mess with. Later I talked to some folks who did go into town, only to discover after their expensive taxi ride that there wasn’t much there, and what was there was closed on Sunday. 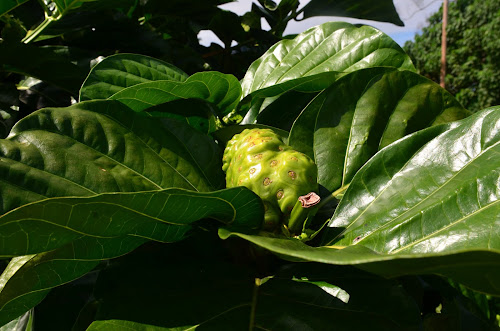 The cruise port is in a very industrialized part of Hilo, and there didn’t seem to be any of the little cruise shops around that are such a familiar sight in so many ports. The other thing that we saw was a lot of rough, black lava rock instead of beaches. I can see why most snorkeling adventures on the Big Island are from a boat, there just aren’t that many beaches.

We watched the sail away from our balcony, and felt the ship speed up. According to the captain, we had to sail at the ship’s maximum of 22 knots in order to cover the 230 miles or so from Hilo to Nahwilliwilli Bay on Kauai. 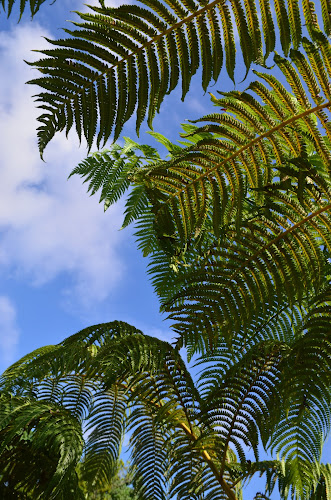 We napped until dinner time, after all, it IS a cruise and that means lots of relaxation. The only problem for us is trying to get all psyched up for dinner at 7:45. I think it is worth it, though, because there are fewer people for the late seating and we have time to visit with our waiter, Elena, who is from Romania. She is a lot more fun to talk to than some tablemates in our cruising history.

Our dinner was beautiful, Mo’s favorite so far, with two versions of chicken, Mo’s in a simple roasted thyme butter and mine in a magnificent Alaskan Beer onion sauté, with caesar salads to begin, and some kind of apple pie in the form of spring rolls and a raspberry dipping sauce. The only down side was my soup, supposed to be a corn chowder with sweet potato that tasted exactly like something that came out of a Gerber baby food jar. Blech!!

None of the entertainers seemed like they were worth the trouble, and we just wandered through the ship back to our room to settle in with our books and a good night’s sleep to get ready for our day on Kauai.

Even with the promise to myself to write every day, another sea day just slipped by me without a single word typed into my journal. Still, after another sunrise at sea, the rest of the day was basically a repeat of the previous one. 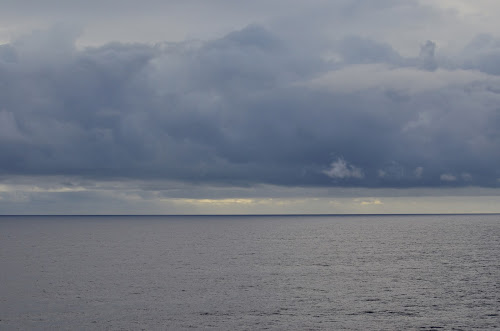 The sun came out a bit more and we actually managed some deck time reading in the afternoon. We ate, we did the treadmill, I met with the knitting ladies and before you could blink it was time for the evening entertainment. 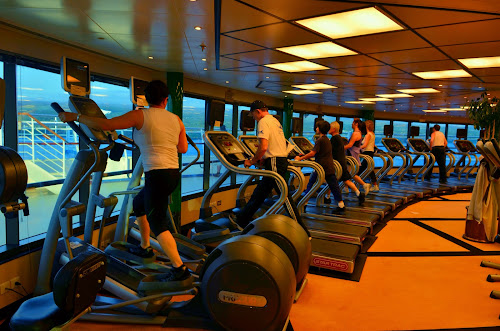 We spent quite a bit of time on the verandah playing gin, and I even saw flying fish. The first cruise Mo and I took together was an inside cabin on Holland America. We moved to rooms with a window, but now I think we are spoiled. I would rather do fewer cruises than settle for a room without the pleasure of fresh air. Speaking of fresh air, Princess has now banned all smoking in the staterooms, even on your deck, so no more stale cigarette stuff drifting our way as we sit outside in the sun. 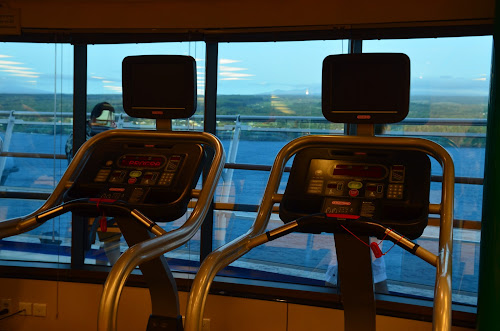 We ambled downstairs for the outlet sale, but the pickings were pretty thin. Who really needs one more satin evening purse, even if it is only ten bucks. 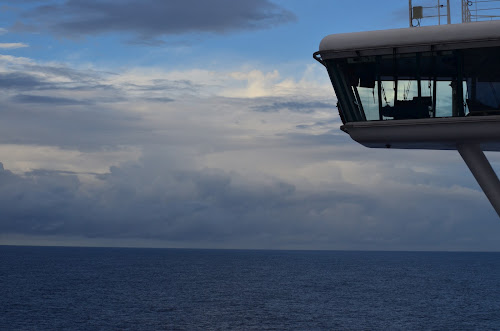 Princess is scheduling more performances so that if you miss a show, you can catch it later. The trade off, of course, is that the shows are fairly short, only 45 minutes at best. We skipped the first production show, but managed to see another one last night. Not spectacular, but entertaining at least.

Once again we returned to our late seating dinner in the Amalfi dinig room for a lovely dinner. We both had orange roughy in a red curry sauce, with fresh veggies and we finished our bottle of dry Riesling purchased on a previous night and saved for us by our waiter. 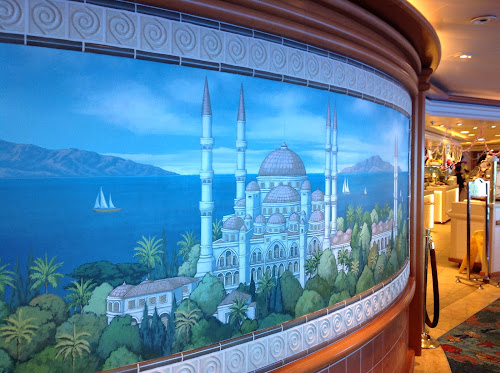 As I said, “Rinse and Repeat” . Nothing much new to report for this last sea day before we reach our first port in Hilo tomorrow morning. For the time being, I feel completely disconnected from anything resembling real life. I think we do so well in the stateroom because we are so used to the MoHo, which is considerably smaller.

Stay tuned for our port day on the big island of Hawaii.