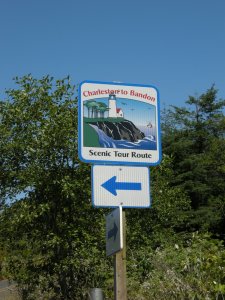 We love byways and backways. You can find all sorts of information about these amazing beautiful highways on the internet, in fact I even found a national geographic book all about some of the nation’s greatest byways. Today we traveled the Charleston to Bandon byway along the Seven Devils road parallel to the coast, and out to the beach. This loop is part of the Pacific Coast Scenic Byway of Oregon.

The most amazing thing on this trip was the lack of cars and people along the route. The Seven Devils road winds over the hills that are between the South Slough area and the coast, traveling through young forests that were heavily logged about 70 years ago.

We stopped in at the South Slough Estuary interpretive center, hoping for some additional information about the slough. Our original plan was to kayak the slough, but the winds were too strong so we abandoned that plan. The Estuary information center is wonderful, though, with the best large scale aerial photograph I have seen in a long time. It is about 10 feet tall and shows the estuary at low tide. There is a tremendous amount of information about this estuary here, I could have stayed for hours, but we were headed for Bandon, so onward.

When we turned west to the Seven Devils Beach wayside, the winds were blowing hard, but not so much that it explained the completely empty parking lot. The beach is gorgeous, long and sandy, with hard packed sands that you can walk on for miles. Of course, it was windy. I posted a video on YouTube to show just how windy it was. I was still amazed to have that beach all to ourselves during July 4th week. Oregon is still wild and free in so many places, and still uncrowded as well.

We drove on to Bandon, stopping in town for a bit of shopping at Winter Rivers Books, a warm and friendly locally owned bookstore, for an artsy clothing purchase at Siren Song, one of my favorite clothing shops in the west, and some great clam chowder at Tony’s Crab Shack. The wind was still blowing furiously, (didn’t they say something about breezy?) so we decided to drive to the famous beach for photos, but didn’t walk there. Maybe next time. The beach in Bandon is one of the most beautiful on the Oregon coast in my opinion, but most of the times I have been there, the winds have been blowing furiously, often including clouds and rain. The sun was gorgeous today, but the winds still blew.