May 22, 2009
When Mo and I planned to go camping on the Memorial Day weekend, our priorities were simple. Not too far from home, and a campfire. Of course, water is always on the list, since camping usually for us includes kayak time. Well, maybe not in the desert. When I indicated that I could get away from work for a long weekend, Mo said, “I really want to go camping, and I want a campfire.” I said, “Didn’t the desert work for you?” “Yeah, but that was last month. I need my camping fix at least once a month.”

So we cast about for places close by that would fit the bill and decided that the perfect spot would be Diamond Lake. A little jewel of a place that isn’t too far from home, and where we scoped out some campsites a few years ago, intending to return. Of course, it is Memorial Day weekend and we do have enough common sense to realize that things may be full and we may have to leave early. I am still working, and so for me, early was driving 8 hours to Klamath on Thursday and pulling out of Mo’s driveway bright and early Friday morning. Not early enough, probably, but the best we could do. There are more than 485 camping sites in the three campgrounds around Diamond Lake, many of them rv sites. What wasn’t clear at all from the website for the Umpqua NF was that only one campground would be open, and only half of that one. Snow still is in big drifts along the roads leading to Theilsen View and Broken Arrow camps, but we still really don’t have a clue why half of the Diamond Lake Campground was still closed. With the lack of personnel around and the continued closure of the Diamond Lake information kiosk operated by the Forest Service, we surmised that it probably had to do with a lack of funding and people to clean the bathrooms and empty the garbage.

We arrived around 10 am, scoped the available sites which were all filled, some even still snowed in and waiting for a camper with a shovel. We drove up to the north side of the lake to the Diamond Lake Resort store to ask about possible locations. The crusty owner said, “hell you can camp up on the hill” and when I asked how much, he said, “nothing.” So we drove out and found the dirt driveway leading up to some primitive sites that were filled with debris, and dirty snowbanks. But the sites were big, long, and level, had some great firepits, and a view of the lake. Never mind that that view is accompanied by the constant sound of big diesel rigs hauling boats out of the water. It still was better than the parking lot at Half Moon Bay, where we camped for the last Labor Day weekend when we ambled off with no reservations. I guess it seems to be our style to just wander around and see what we can find.

After we pulled in, with the sites a bit ambiguous, a fellow camper came up to tell us that the resort was requiring everyone to leave tonight because the fancy rv park down the road had opened today and the resort wasn’t allowed to compete. Hmmm. Well, maybe we will just sit tight for a bit. We set up camp, put out the nifty solar panel and let the batteries charge up nicely, put out the slide, opened the awning, the table, the chairs and a couple of glasses of wine. Perfect. Later in the day, after we drove around a bit and checked out the packed RV park and the rest of the packed campgrounds, we returned to our little spot in the woods to find some more people trying to park. Seems as though the resort owners here gave up since the rv park was full and they were letting people park in this lot. 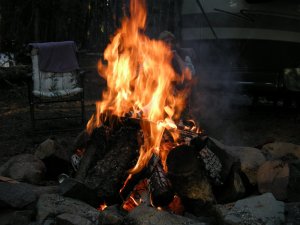 So, once more, instead of camping in a forest service campground as planned, we are boondocking. Free camping, a water faucet that actually works, and Mo has a great huge fire going. Then, after deciding to check out the electric outlet, we found that it worked as well. Couldn’t be better. We spent a lovely evening watching a great movie on DVD. Hmm, does it still qualify as boondocking just because it is free? For the entire weekend, we watched people come and go, with the mystery of who was paying for the electricity and monitoring the site unanswered. We didn’t find out until we pulled out on Monday morning that we were parked in the official employees quarters for the Diamond Lake resort, and that it was a one-time deal. Great luck for us! We also were thankful that by this time next year I will be retired and we won’t have to wait until the holiday weekends to find a place to camp.

We took a little afternoon break and then explored the closed road to Theilsen View Campground, 4x4ing through the snow banks as far as we could before we took off walking the bike trail. The views of Mt. Theilsen were gorgeous, the water was clear, and we found a great spot for a kayak launch the next day. We spent the rest of the evening enjoying the fire. Perfect. There was even a huge pile of debris all around us for burning, so we won’t run out of firewood. The sun was shining with no rain in the forecast, the temperatures just cool enough for a sweater, and not a soul within 100 yards of our camp!