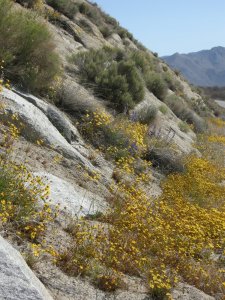 Our photos of Kernville are here Visiting Kernville
March 27 Friday

Even though I lived in Kernville back in the late 60’s, I barely recognized anything there. I tried to find the house along the river where I brought my newborn daughter in 1969, and while a house was there, it had been remodeled. I could only tell where I was by turning around and looking across the little park road to the river, where I recognized the view. The house I lived in before that in Lake Isabella nearby was also gone, covered over by a new 4 lane highway, south of the dam. It was still great being there, and remembering how life was when I had four little children under 6 and Melody was an infant in my arms. Time has a way of going by I guess, and I know that is a very trite, often repeated statement, but when you visit old haunts, words fail the feelings. It was good to go there and good to leave.

We camped in a lovely campground almost right in the town of Wofford Heights, Tilly Creek, on southwest side of Lake Isabella. The campground was nearly empty, but the caretaker told us that on the weekend to come, it was booked completely. It seems that there is a fishing derby, and 3 fish in the lake have been tagged with a 10,000 ticket. Catch that fish using specific gear from a specific sporting goods store and they double the prize. It was a bit daunting to imagine that lake covered with boats, all crazy for winning that 10K prize. We were really glad our timing was so good, even by accident. Note: don’t plan to camp anywhere near Lake Isabella on the first of April!

We left early in the morning, traveling east on 178 and north on the great road 395. I know that the Mother Road HWY 66 has its lore, but HWY 395 is truly a magical road leading from southern California cities, through the deserts, along the backside of the Sierras, through the edge of basin and range landscapes, through ancient calderas, new lava flows, huge lakes with no outlets, and wild country. I think there are more rock hounding sites on 395 than just about any road I know. Much of it is just 2 lane, and in some parts of Oregon, you won’t see another car for hours. Great road, but not so much in the winter. I have been in snowstorms on 395 going into Reno in May. You definitely need to plan and watch the weather if traveling that route.