Here is the Picasa web link for photos for today:
http://picasaweb.google.com/kyotesue/TravelingIdahoToOregon

Mo and I are watching the morning news, which of course is focused on the summer Olympics in Bejing. The brilliant morning sun is flowing in through the open screen door facing east. We are in the Hellsgate State Park on the Snake River on the western edge of Lewiston, Idaho. I used to camp at this park often when I was working in this area 30 years ago, and when I did craft shows here, the lovely Dogwood Festival, held every April. Sometimes the dogwoods were in full bloom, and other times it would snow, but this area is usually much warmer than the surrounding parts of Washington and Idaho, and Lewiston is known as the “Banana Belt”. We are just south of the confluence of the Clearwater and Snake Rivers, and the Clearwater is an amazing river coming from the Bitterroot Mountains, and much of this area is part of the Lewis and Clark Trail. Here at the park, there is a lovely Discovery Center that highlights the story of the famous pair as they traveled through this country. We will be heading east and south along HWY 95, traveling through Nez Perce country, passing the Nez Perce visitor center and perhaps a casino or two that wasn’t here in the days when I did the soil survey for these areas. The Nez Perce National Historic Park has several sites in this vicinity, and it is a great history lesson to view these areas with the stories that go with them. 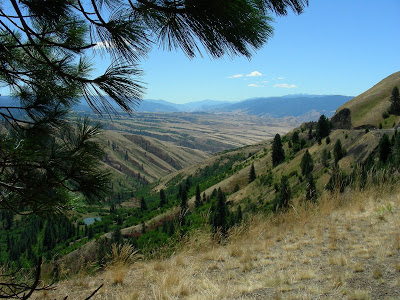 The photo is taken at the top of White Bird Hill, site of a famous battle involving the Nez Perce and Chief Joseph. http://www.nps.gov/nepe/

Its fun being here, recognizing all the landscapes and landforms, knowing the plants, the geology, the natural history. Sometimes when I am working in California I miss that intimate knowledge of an area that I developed over so many years working in the Idaho Panhandle. Technically we are out of the panhandle now that we came down the Lewiston Hill, once a winding steep road

with many switchbacks, now a very long down grade of 7 percent that makes me very happy with the MoHo’s tow-haul feature that downshifts with just a slight touch of the brake. I lived here when the hill opened and the first weekend a semi hit one of the runaway truck ramps, and because it was unexpectedly frozen, the trucker was launched out over the 1000 foot hill to an unhappy end. Here is a great photo from the 1920’s of the original road which had 64 turns in less than 10 miles. http://www.idptv.state.id.us/buildingbig/hiways/lewistonhill.html

Our goal was this lovely park, full of big old maples that have been planted long enough ago to provide lovely shade, the Snake River out our window, electric and water, with a dump station and television reception with an antenna from Spokane.

This is a place worth returning to, with so much around the area to explore, including a long lovely river walkway that goes for several miles along the Snake and the Clearwater. In a little while we will head south and plan to go through John Day in Oregon and then on to somewhere unknown for the night tonight before we head home tomorrow via Mo’s brother’s home in La Pine. We couldn’t ask for a better day to travel through this part of Idaho.