December 23 on the road again heading for Austin to spend a couple of days exploring that famously eclectic city. Found the campground along HWY 71 after a few fumbles early enough that there was still time to go into town and begin to see what all the hoopla is about when people talk of Austin.

The HWY 71 RV park is on the southeast side of town, which is the older part of Austin and there were a lot of Hispanic neighborhoods as we drove through this older part to get to downtown. Again, a big advertised visitor center for the city, supposedly open till 6 had a note on the door that they had closed at 3pm. Another big sigh until I managed to get the attention of a woman inside who grudgingly handed me a map of the city through the old door.

The visitor center is right on 6th Street, what is know as the bourbon Street of Austin. This time of year and this time of day though was less than exciting except for the many homeless people all around. There were several bars and some older looking buildings but with the University of Texas on break and most families home for Christmas, it was pretty quiet. Found a neat old Irish Pub in an historic building that had an original bar that had been assembled and disassembled in Dublin before being brought here and rebuilt here in Austin. Had Irish Coffee’s and bar food while three footballs games broadcasted at once on the big screens, while checking out the Austin map and planning where to go next.

One of the things I had read that was not to be missed in Austin was the Whole Foods Market, the main headquarters for the famous food chain. Downtown Austin is pretty easy to navigate with numbered streets following sensible block patterns unless they run into a river or the capitol or something like that, so finding the store was easy. And what a store it was. I walked in while Mo tried to park and was awed and overwhelmed. It was every food lover’s delight, with acres of wine, miles of cheeses, walls of olive oil, and rows and rows of bins of nuts, seeds, and grains. The store was as big as a Wal-Mart but seriously high end. The people were filling the aisles and overheard conversations were fun, especially the woman counting on her fingers as she eyed a huge ham. The meat section was every cooks dream, with tenderloin filet roasts that were 25 bucks a pound and about 2 feet long and huge crown roasts of pork with all the cute little hats on the end bones. By the time I made it to the salad bars, I was completely overwhelmed with choices, and there were several separate little food bars where people were eating different varieties of food. I have never seen a place like this. The final topping to the extreme nature of the market was the ice skating rink on the roof, where people from Austin came to ice skate as a part of their shopping Christmas experience. Amazing.

After that it was late so traveled back through town watching the moon rise over the Capitol and then across the river to our little park back 20 miles south in Bastrop. 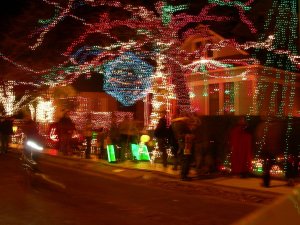 There are no words for 37th Street in Austin at Christmas. It’s just a small short street in an ordinary neighborhood with an amazing history of people coming together to do something special. Mo and I read about it in the 10 best things to do in Austin, and decided to go find it. It really is the BEST thing to do in Austin at Christmas. Don’t miss it. Pictures can’t catch it and words fail me. Tacky, crazy, glitzy, and completely out of control and completely wonderful, we walked 37th street with hundreds of people and were delighted as children by the lights and colors and laughter.