This day started early with another buffet breakfast at the hotel and on the bus by 8am. Our first venture was a trip to the Grand Palace. From the entrance gate, I could see the Phra Si Ratlana Chedi and thought, gee that’s pretty.

Nothing prepared me for what it was like to actually walk into Wat Phra Kao. The complexity of the art, the buildings the gilded figures, all of it, was overwhelming. And the sparkle! It’s hard to explain how all the mirrors and gold sparkle in the sunlight. No picture could capture it because it is related to your own movement as you walk around the grounds.

Everything soars upward, the chedis (where relics of the Buddha are held, the prangs which guard the grounds and even the buildings, everything requires that you look “up”. The ‘bat’ holds the sacred emerald Buddha, but the jade sculpture was so surrounded by complexity that you could barely see it. I sat on the floor with some Thai girl scouts and thought of my friend Shera who passed early this year and eased her passing with Buddhism.

Later in the day we went to the klongs, the canals of Bangkok. We walked from the palace down to the river where we boarded a long boat for a tour. Bankok used to be a city of water and the klongs

were the main form of transportation. The ride up the river in the daylight was very different from the magical romance of the night before but fun nonetheless. Then we motored into the main klong going west into the Thon Buri side of Bangkok. Here we saw the intricate network of canals and scenes of everyday river life. There even is actually a “bank boat” that goes up the river to service people at their houses. We saw the Royal Barges and many houses of an amazing variety.

Lunch was at a restaurant near the waterfront and then we were taken to the Gems gallery to see the sapphires and rubies that Thailand is so famous for. It was a bit overwhelming, a little impressive, but just a thinly disguised way to get us to spend big bucks. The one small piece that I looked at was $2500. 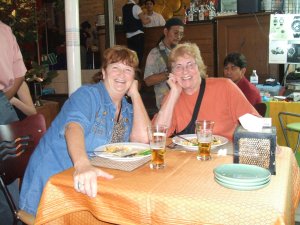 Back to the hotel for a good nap and then downstairs for a “cultural discussion”. It was only ok, but a little bit interesting. More talk about the king and how wonderful he is and a bit about being a proper Thai girl. The people here are very modest and proper. Ray was a Buddhist monk and he often dispenses Buddhist teachings while we are on the bus.

Mo and I then braved the streets of Pat Pang to find some dinner where we ate Pad Thai and San Miguel beer and watched all the people at the night market. We also went to the Planet Internet Café and checked email, and home to sleep after I downloaded all our photos to the flash drive. It seems I am taking a lot of photos, and everything is filling up fast!