Transcribed from our old leather journal on June 14, 2018 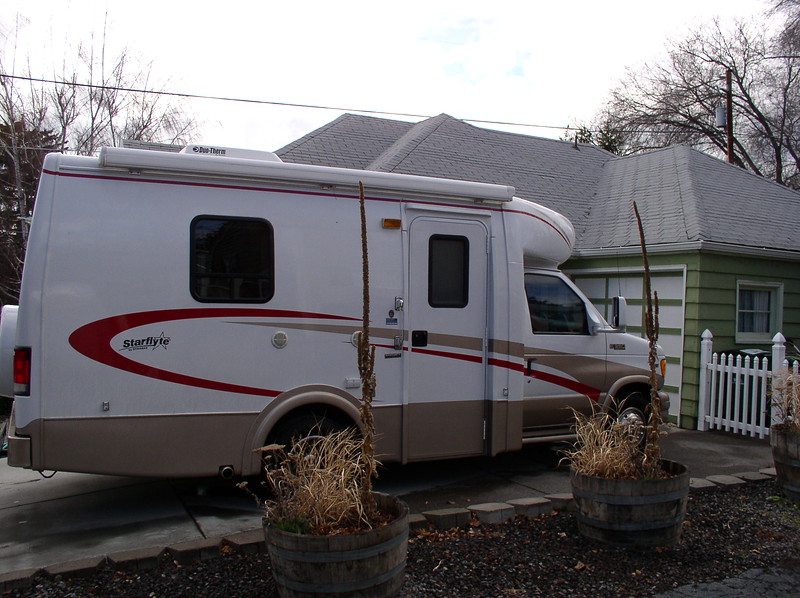 We left my house at 3PM driving Mo’s Van to go to Salem. The trip turned out to be really successful.  We stayed at the Salem Motel 6 as planned and had dinner with Don near his hotel at Newport Bay.  It was almost 11 when we went to sleep.  They gave us a handicap room which we thought was funny.

Saturday morning was a little bit crazy with me driving to Albany to visit Melody while Mo watched Don’s drills.  Back together at noon and traveling south again to check out the RV Show.  Stopped first at Guaranty in Junction City to look at the Dynamax.  Then on to the show in Eugene which wasn’t that great.  Lots of big new diesel pushers and no class B’s.  We decided to drive back to Guaranty and look again and the rig really did look great and within an hour Mo had bought it for $15,000 less than they asked.

It is so great and even Mo was a little bit excited.  we will pick it up on Mondy the 14th.  We drove 120 over to Redmond and stayed at the Motel 6 there after a really strange dinner at Sheri’s with bad food and bad service.

Sunday morning we went back for breakfast and it was fine.  Checked out the RV show in Redmond but it turned out to be a sports show so we didn’t go.  On to Bend where we stopped at Target, GI Joes, and Alder River Co, where Mo bought our life jackets and Costco before heading home.  We tried to get up to Newberry but still too much snow. The weather was great, though, sunny and in the 60’s.

We stopped at Collier State Park Campground and walked around for ah hour, checking out the Williamson River and kayak possibilities.  Home to Klamath where we had pizza at Abby’s and then home to my houe for TV and the Sunday paper and early to bed.

On March 15th we made the long one day trip to pick up the MoHo.  I met Mo at Rocky Point and we left at 8am for Junction City.  I drove the van and Mo drove the Dakota.  We made good time over Highway 58 and arrived at the dealer at noon.

Mo finalized the sale and we did the walkthrough till 4pm.  Then across the street to trade the van and truck for a great 2002 white Blazer. The sale was easy, but the paper work wasn’t done till 8!

We drove to the Mexican Restaurant at Valley River Parkway for a great dinner and then decided to go home via I-5 since it was so late.  We took turned driving and both vehicles are great.  The V-10 on the Motorhome just cruises at 65 to 70 mph and climbs the passes so easily.

We got home at 1AM and celebrated with a quick soak in the hot tub under the stars.  Long and very successful day!